Fleadh Cheoil launches a week of festivities in Limerick 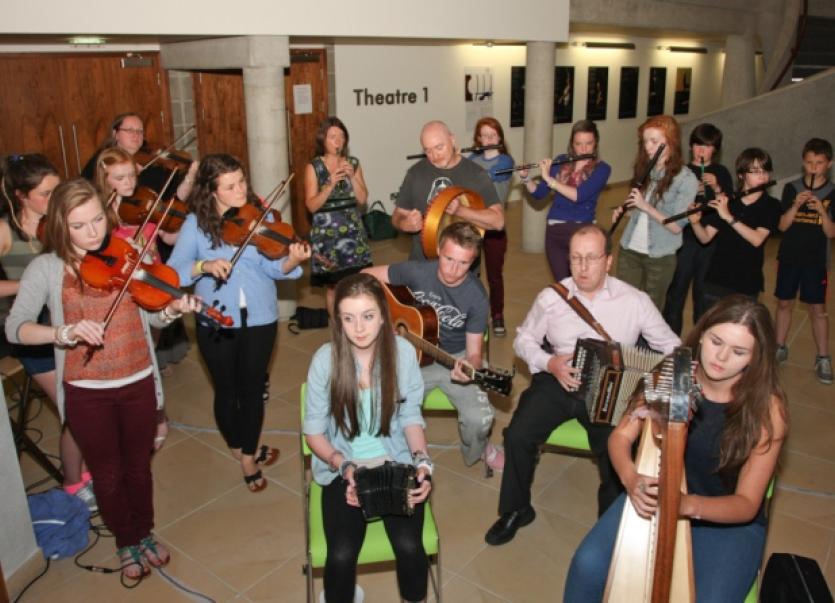 INTERNATIONAL and local trad music fanatics gathered at the University of Limerick’s Irish World Academy for the launch of the annual Fleadh Cheoil Na Mumhan this week.

INTERNATIONAL and local trad music fanatics gathered at the University of Limerick’s Irish World Academy for the launch of the annual Fleadh Cheoil Na Mumhan this week.

The festival, which celebrates Ireland’s heritage in music and the arts, started with a few teaser events on Sunday ahead of the official launch on Tuesday evening at the Irish World Academy.

According to the organisers, it is the first time the Munster festival has been enclosed in a university campus in its 53 years. It is also the first time that Castletroy CCÉ has hosted the event.

PRO of the event Liam Guiney, who works with Castletroy CCÉ, said it was a fantastic opportunity for the young, local branch and the University of Limerick to mix together for the event.

He said it was the popularity of trad music that drove the success of the branch. “We set up a branch in the organisation in 2009 and we have had huge interest ever since. We’re growing and we’re expanding. There’s a lot of culture all over the city; musical, different arts forms, theatre. I can’t get over the amount of voluntary arts organisations that are here in Limerick,” he added.

The launch, which kicked off with multi-instrumental performances by the local branch, was attended by special guests and a number of faculty members of the Irish Music and Dance department.

Course leader Dr Niall Keegan said there is tremendous pride for the UL to host the festival and that a lot of hard work from volunteers has been put into the week-long occasion.

“We have a small and very tight group who have put their lives into organising this and I want to thank each and every single one of them. I also want to thank the kids,” he said.

Acting director of the course Dr Sandra Joyce said it is a great time for the young and old generations in traditional music to come together.

“It’s the social aspect of this that keeps us going. That is what it’s about. It’s completely about inter-generation. We have put a lot of thought into this week and it’s just full of diversity,” she said.

Chairperson of Munster Council of Comhaltas, Tadhg O Maolcatha officially launched the festival, said the event improves every year and he concluded that children should be introduced to music more at school.

The full programme of events can be viewed at www.munsterfleadh.ie.