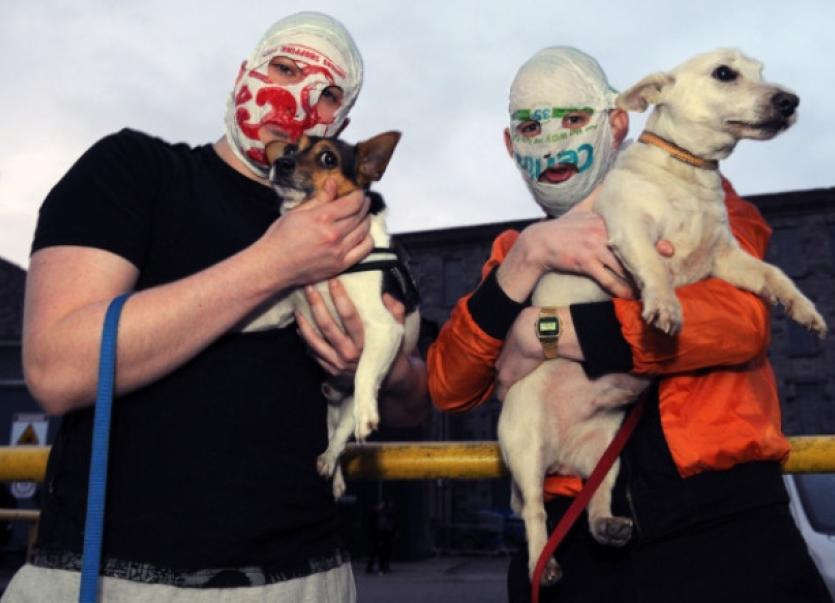 THE Rubberbandits are gearing up to take their smash hit stage show to the Electric Picnic next week.

THE Rubberbandits are gearing up to take their smash hit stage show to the Electric Picnic next week.

The plastic-bag wearing rappers/satirists are in the midst of another sell out run at the Edinburgh Fringe, bringing their show Continental Fistfight to the masses.

The ‘Bandits will return to Stradbally next week for a stint on the comedy stage, their first appearance since 2010’s riotous gig at the festival.

“We’re not too fussed about returning this August,” admitted Blind Boy Boat Club. “We’ll just have come back from doing bigger stages at Reading and Leeds.

“We’ve gotten too big for our boots and only hang around with English people now and write negative things about Michael Collins on Bus Stops in Suffolk. We eat blighty potatoes and wash them down with boiling hot bowls of protestant soup, followed by throwing the Queen’s shilling through the windows of the Dail,” he added.

The duo recently released their latest single, Fellas, which features a Gabriel Byrne puppet and theorises on the world’s view on homosexuality. It has won plaudits from celebs such as Russell Brand and Stephen Fry.

“Celebrities are only doing that because they want to hang around with us,” said Blind Boy.

“The only way to view “Fellas” is to approach it like it’s a dream you had. Pretend you woke up in the morning, and that video was your dream. How would you analyse it? Would you just accept it? How deep would you dig? The answer differs depending on the person.”

Limerick comedian Karl Spain will return to the Picnic for his annual pilgrimage to the Stradbally music and arts festival - which is now sold out.

Gearing up for their first Picnic festival appearance are the Capriccio String Quartet, made up of Deirdre Cussen, Cora Houlihan, Finola and Bernice Molony.

The quartet are moving away from their classical beginnings to present an 80’s Karaoke set at the Puball Gaeilge in the Mindfield area at 2pm on the Sunday.