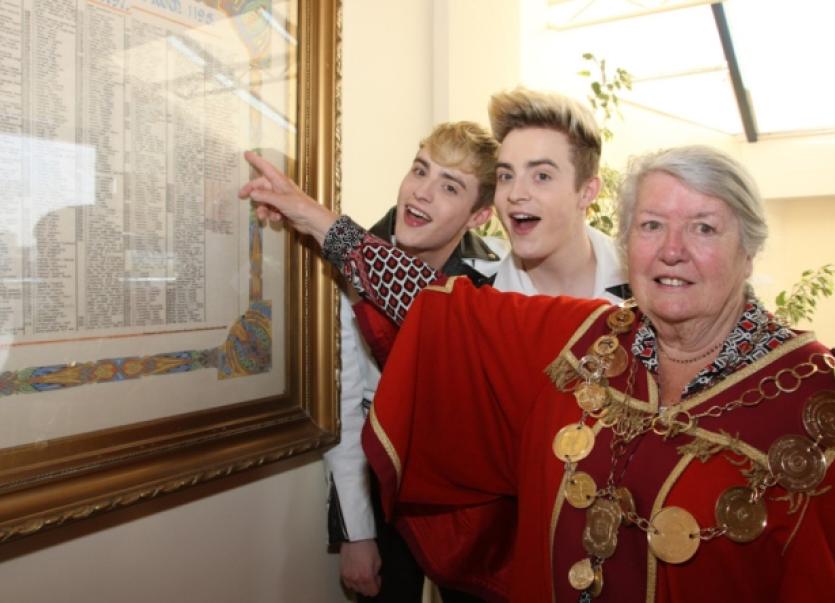 MAYOR of Limerick Cllr Kathleen Leddin had the surprise of her life when she got a visit from pop sensations Jedward.

MAYOR of Limerick Cllr Kathleen Leddin had the surprise of her life when she got a visit from pop sensations Jedward.

The brothers, whose family hail from the northside, decided to pay a surprise visit to the first citizen on a visit to the city last week.

As well as this, they also visited sick youngsters in the Children’s Ark Unit at the University Hospital.

And with just half an hours’ notice, Mayor Leddin came from her home on the North Circular Road to meet the energetic duo.

While at City Hall, she showed the pair around the building, and they viewed a scroll which lists the previous first citizens of Limerick.

Among them were the mayor in 1966/67, Vincent Feeney, who is an uncle of the popstars.

“We were able to show his name on the list, so they were very excited about this. They were very impressed by this. They didn’t know coming in, and when I told them, they were surprised. They told me they had done calligraphy when they were in school in Dublin,” Mayor Leddin said.

Reacting to her meeting the Eurovision stars, she said there were no airs or graces about them.

“It was great. I had seen them on television, but they are two great young lads: very very nice. Very pleasant, very cheerful, very nice. I don’t think I have ever met any stars in my day before this,” she said.

The Mayor said the pair were very interested in the artefacts of City Hall, including the mayoral chain.

“They were very normal, natural young men. It was very short notice. But it was fine: we had a cup of tea, and they took loads and loads of photographs. I will be in the annals of the pop scene for a long time,” Mayor Leddin joked.

At the end of her meeting with the twins, the mayor collected a few autographs for her grandchildren - who are understandably quite jealous.

“I got a few autographs, and they are like gold dust at the moment,” she admitted.

John and Edward rose to fame on hit TV3 show The X Factor back in 2009.

They have retained strong links to Limerick, visiting the area as often as they can.

Their grandfather Jim Grimes was laid to rest at St Munchin’s Church in Thomondgate in March 2012.

Jim lived in Mayorstone Park for most of his life.

In an interview with the Limerick Leader in 2011, Edward Grimes said: “We love coming to Limerick, our dad’s from Limerick, so that is really cool. We usually get to meet up with our family and say hi.” Jedward are playing at the UL Basketball Arena this Saturday night.