Three Tenors set for trio of concerts in Limerick 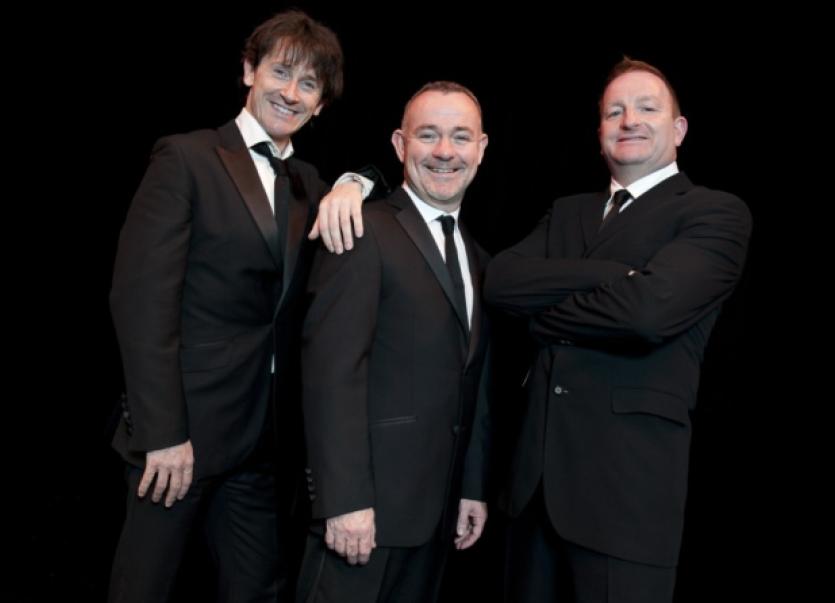 ONLY a few dozen tickets remain for this weekend’s gala recital in Newcastle West featuring The Three Tenors.

ONLY a few dozen tickets remain for this weekend’s gala recital in Newcastle West featuring The Three Tenors.

The recital, which takes place this Sunday in Our Lady of the Immaculate Conception church, is being organised by the Newcastle West and District Lions Club.

But the president of the Lions Club, Gerardine Holland warned this Monday: “There will definitely be no tickets on sale at the church on Saturday evening.”

With just days to go, well over 550 of the 600 tickets printed have been sold, to the immense gratification of the small organising committee.

The trio are also playing St Munchin’s Church in the city on December 21 and Glin Church on December 23, tickets for which are still available.

The Lions Club has been hosting Christmas recitals for the past six or seven years as fund-raising events but, up to now, has never issued and sold tickets in advance. “We always relied on bucket collections,” Ms Holland explained, “And we were always very interested in harnessing local talent. We never had to think about tickets.” She added that, up to now, they also relied on people performing without fees.

This year, however, the club decided on a different approach and have signed up The Three Tenors. They also decided to somewhat restrict seating in the side aisles, to ensure that everybody can see the singers.

The Three Tenors, Ray O’Hare, Declan Kellly and Dominic McGorian have sung together for several years now, performing up to 100 concerts a year in Ireland, Britain and elsewhere.

They have performed in Belfast Cathedral, in the National Concert Hall and the Cork Opera House, among other venues and last year they performed in Knockaderry.

The New York Times, in reviewing their “knockout vocal performance” described one of their concerts as “the most delicious box of chocolates your ears have ever heard” while the Belfast Telegraph lauded a “wonderfully polished performance” which took the Waterfront by storm.

The trio has established a very reliable performance approach, delivering a thrilling, fast-moving concert with their own particular classic/crossover mix. Their speciality is singing magical feel-good songs and they draw inspiration from the greats, from classical hits to Sinatra’s My Way, Leonard Cohen’s Hallelujah to the Best of Josef Locke and Mario Lanza.

Tickets for the Newcastle West recital cost €25 from Tony Hayes in the Square.

No decision has yet been made as to where the proceeds of this year’s fund-raiser will go. Since it was first established in the area, the Lions Club has raised and donated almost €200,000 to various causes, among them St Ita’s, the Brothers of Charity, the local youth club and the Cancer Day Care ward at University Hospital.

But every year, Ms Holland explained, the club gets letters from people who have faced difficulties, trauma or tragedy during the year and are dreading Christmas. “We always meet those requests first,” she said, reassuringly.

Meanwhile, her advice is, nip down to Tony Hayes if you want to secure your tickets.

And people will also be reassured to know that Newcastle West will have Christmas lights this festive season.

Pat O’Donovan, chairman of the Newcastle West Business Association said an electrician had come forward and began putting up the lights this Monday. He was unable to say when they would be switched on.