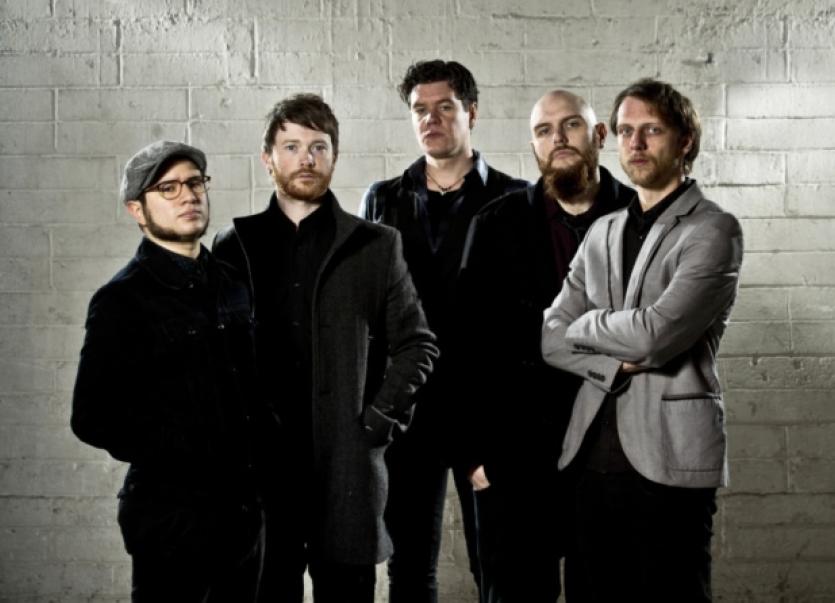 RELIEF is etched all over Ronan Mitchell’s face. The lead singer of Limerick band Fox Jaw is delighted that the world can finally listen to their new album.

RELIEF is etched all over Ronan Mitchell’s face. The lead singer of Limerick band Fox Jaw is delighted that the world can finally listen to their new album.

The singer - boasting one of the most distinctive voices on the Irish music scene, think a register lower than The National’s Matt Berninger - sinks into a chair and offers a slight grin when asked what he thinks about Ghost’s Parade, Fox Jaw’s keenly awaited new album.

“I love it. I am just delighted to get a chance for other people to hear it now, we have been sitting on it for so long,” he says.

This is a new start for the beefed up five piece that was a long time coming.

As Fox Jaw Bounty Hunters the central three piece of Mitchell, Morgan Nolan and Shane Serrano released the 2011 debut The Devil In Music, one that rang with a chillingly dark tone, an album that boasted reference points as diverse - we thought - of Queens of the Stone Age and Joe Cocker.

It was a solid debut offering, but failed to make the impact the band hoped.

“We rushed releasing it,” says Ronan simply. “There were a lot of things coming out at the same time, we just released it at a bad time. I think it just got lost underneath all of that, so this time we decided to have a better plan of attack.”

That plan included a year ‘in hiding’, writing, recording and honing their craft, before drip feeding singles and incedibly impressive videos - produced by drummer Serrano.

For a notoriously proactive, hardworking band - they played 80 shows withing ten months of releasing their debut - it was hard to sit on exciting new material.

“We were excited about this two years ago, we just couldn’t give it to anyone,” says the singer.

“Especially playing it live, we were touring a lot of the tracks off it for the last year and a bit and then you have people coming up to you after a gig saying - ‘where’s the album’ or that song was great, can we buy that?’ And it is like, that is not coming out for another year.

“We sat down and planned out the whole campaign from start to finish, what made the most sense and what we thought would do better for us.”

Strategy was key. As was working with a producer for the first time - Dave ‘Skippy’ Christophers, veteran of work with Josh Ritter, Whipping Boy and Mundy. Owen Lewis, an engineer from Limerick who worked on album number one, was also enlisted, while a decision to record it in the Bishops’ Palace paid dividends, adding to the expansive, dark and brooding sound on the record, one that hints at the surroundings it was recorded in.

“It felt like a huge step forward when we did it, it absolutely did,” says Ronan of the album. “I think even just working with a producer, because everything we did before, we did ourselves. Just having someone to guide us in the right direction.”

New faces were added to the line-up in the form of Manolis Sheehan and Kieran J Sims, both experienced musicians and the name was shortened to Fox Jaw. New directions were experimented with also, leading to an album that plays with the notion of the typical ‘Fox Jaw’ sound.

The album is a cracker, bursting with influences from heavy rock leanings to delicate ballads, showcasing Fox Jaw’s ever evolving sound and reinforcing their image as a modern band with an old soul.

“One thing we were worried about, a lot of the songs, the genres are a bit...it is not one thing,” says Ronan. “Dave helped us make it all gel. The one thing he said was once I started singing on it, it would all tie together.

“But even things like we grouped songs - stuff that suited styles - and arranged them that way. Even sonically, the sounds we used to tie the whole thing together; I think the overall picture of it, is that it does work. I think it does anyway.”

Fox Jaw. A band with a new name, a new line-up, a new direction and now armed with a new album. The future is yet to be written for this band, expect it to be in bright lights.

Ghost’s Parade is out now, see record stores and www.foxjaw.ie. Fox Jaw play Dolan’s Warehouse this Saturday with support from The Mighty Stef and The Hipneck Blues Collective