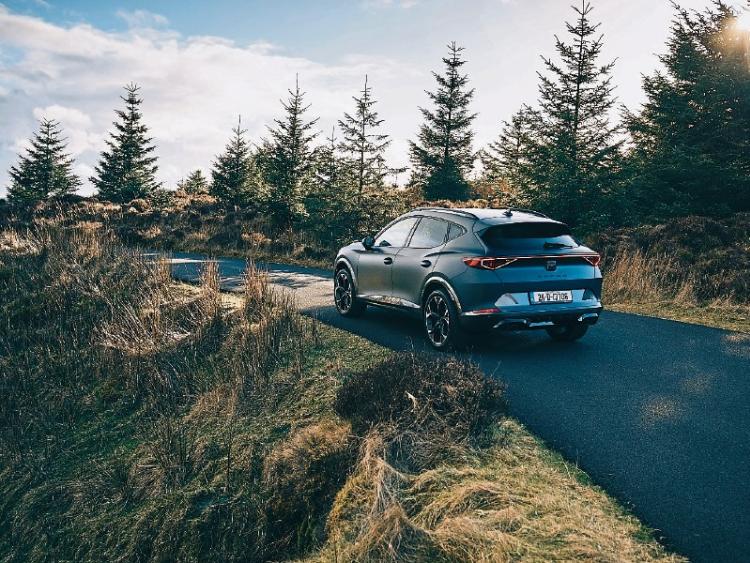 CUPRA is the stand-alone performance wing of Spanish carmaker SEAT, owned by the Volkswagen Group.

The CUPRA brand is design and performance led, positioned between the mass market and the premium segment while SEAT enjoys a younger customer profile by about ten years on average.

Formentor is the first car developed and designed for the CUPRA brand. It marks the brand’s entry into the CUV segment which is expected to double its market share in Europe over the next five years.

The car is mostly aimed at male customers of 35-54 years of age who probably drive coupe cars and are less family orientated, and have an above average income. People who use style as a way of life to express themselves and who appreciate the very latest technologies.

Both have DSG automatic transmission and qualify for SEAI grants of €5,000. VZ comes from the Spanish word Veloz meaning quick or fast.

My car was the top VZ e-hybrid with 245hp of pure performance enjoyment as I discovered. When pushed, it can hit 100km/h in just 7.0 seconds. The battery is a 12.8kWh Lithion-ion with a charging time of between 3hrs 33 mins (with the Cupra charger and monitor the activity on your smartphone), and 5hrs depending on how your charge method. Two charging cables are provided in the boot.

This electric/petrol car offers a range of around 60 kms in electric-mode only. Total torque is 400Nm. With C02 emissions of 32-35g/km this version is in Tax Band C. I achieved 7.9 L/100kms during my week with the car.

The car is best explained as a marriage between the robustness of an SUV together with the sporty essence of a hatchback. It sits closer to the ground than an SUV yet the driver sits slightly higher than in a conventional hatchback.

Viewed from the front it looks a stylish, mean looking machine especially in a midnight Black exterior and dark privacy glass as in my test car. The bonnet is high and the grille boasts the unusual and angular CUPRA logo.

Angular LED headlights stand out and have additional round lights added below. The robust bumper with air intakes shows off the car’s sporty character.

Side blisters enhance the feeling of movement and dynamism and make the car appear lower. You note the sleek, sculpted lines, the slope of the roof, high wheel arches and those stunning alloys with copper inserts.

Lights dominate at the rear where the ‘coast to coast’ light that connects the tail lights really stands out as do two twin tailpipes in matte black finish.

A lovely theme of dark chrome and copper runs through the interior. The leather dash and wraparound lights are familiar to the new Leon car.

The centrepiece is the 12-inch infotainment touchscreen which looks after the functionality and connectivity to all occupants and so reduces the button count.

Racing inspired satellite buttons around the steering wheel allow you to shift between drive profiles with ease on the top VZ version. CUPRA engineers have developed the Drive mode which allows you select the right car settings for every route or driving situation you could need. You can fine tune the suspension, brakes and pedal sensitivity.

Spacewise, there’s good rear head room with the tall roof, and the power tailgate reveals a boot of 345 litres.

Formentor is the brand’s most connected car. You can keep informed on the go with CUPRA Connect, receive real-time traffic updates and directions while seamlessly connecting to your smartphone to use apps and listen to music services while on the move.