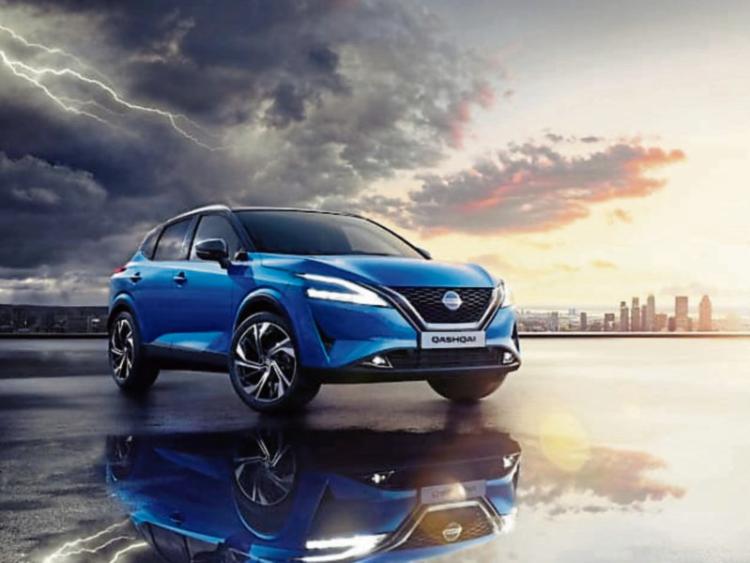 Nissan Qashqai: The latest generation of one of Ireland's most popular SUVs is here now

Order books have now opened for the new third generation Nissan Qashqai just in time for the July registration plates.

Nissan say this new model is ‘a game-changer for Irish families who want to drive electric while enjoying the comforts and familiarity of Ireland’s best-selling crossover’.

Some 50,000 Irish motorists currently drive a Qashqai and this new model is a key part of the company’s strategy to achieve 50pc electrified sales in Europe by 2024.

At a viewing of a preproduction model at Nissan’s Training Academy in Naas we could compare all three Qashqai models and the changes to the newest.

Unmistakably Qashqai in its styling, this new version is more muscular, sharp and modern. It comes with a more purposeful stance, an extended wheelbase and imposing 20-inch alloy wheels.

The longer wheelbase means more rooms for users and additional luggage capacity of 50 litres over the previous generation thanks to the lowering of the floor by 20mm and the extended wheelbase and width of the car. Luggage boards have 16 different configurations. A skinny spare is standard. A powered hands-free tailgate is offered.

Doors now open wider to make for easier getting in and out of the car and the rear doors now open to 90 degrees allowing easier access to babies and toddlers in child seats.

Nissan say they have concentrated on enhancing connectivity and technology in the car like an advanced infotainment system with a broad portfolio of connected devices, in-car WiFi for up to seven devices and NissanConnect Services, a dedicated app with which to interact with and monitor the vehicle, and a new 10.8-inch Head-Up Display that provides the biggest-in-segment image size.

Numerous safety features include cyclists’ recognition, Junction Assist, Blind Spot intervention and Intelligent Forward Collision Warning which can monitor the actions of two cars on the road ahead - this feature will help reduce multiple car collisions.

The New Qashqai will not only be available with a 1.3 DiG-T petrol engine equipped with mild hybrid technology, but it also represents the European debut of Nissan’s hybrid powertrain that draws technologies from their 100pc electric LEAF model. It is based on the 1.3 Dig-T petrol engine that was introduced to Qashqai in 2018 and will be offered with two power outputs - 138hp and 156hp - with either a 6-speed manual transmission, or new Xtronic gearbox (156hp only).

With the e-POWER system, the petrol engine is used solely to generate electricity with the wheels completely driven by the electric motor. The 1.5 petrol engine has a power output of 187hp. This version has the new ‘one-pedal’ driving experience called e-Pedal (similar to the LEAF) which allows you start, accelerate and decelerate using just the accelerator pedal.

First customers are being offered a special launch version called the Premiere Edition which will offer an extended palette of two-tone colour options and advanced technology convenience features.

Pricing will be announced this summer.