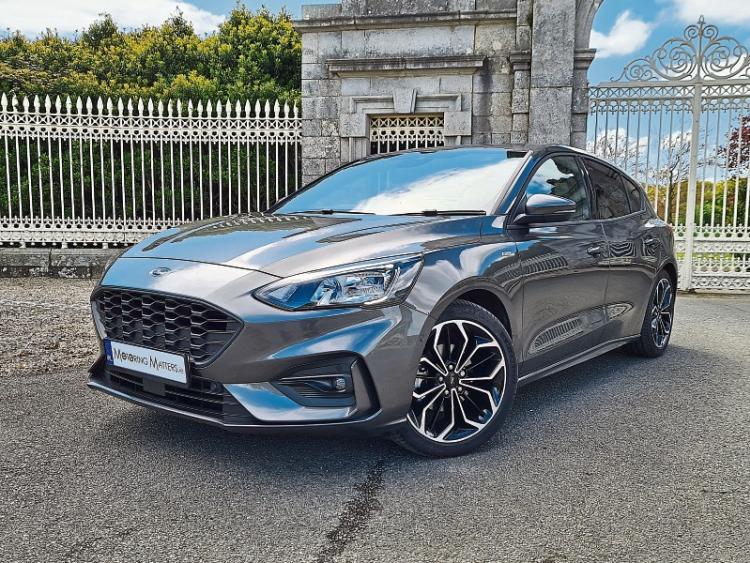 The first Ford Focus appeared on Irish roads in late 1998 as a replacement for the ageing Ford Escort. Now in its fourth gerneration, the Focus still remains one of Ireland’s best-selling cars.

The current Ford Focus is based on a completely new platform, while a new design language and improved infotainment also feature. Originally available in petrol or diesel engine guises only, the enhanced Focus is now available with EcoBoost Hybrid technology for the first time.

The new EcoBoost 1.0-litre mild hybrid powertrain in the Focus features cutting-edge technology designed to keep pollution and running-costs down. Thanks to its 48V mild-hybrid system (mHEV) and cylinder deactivation, the new engine boasts increased fuel efficiency of up to 17% when compared to a standard, non-hybrid, 1.0-litre EcoBoost petrol engine. Cylinder deactivation enhances fuel efficiency by automatically switching off one of the cylinders when full capacity is not needed, such as when coasting or cruising with light demand on the engine. The system can disengage, or re-engage, one cylinder in 14 milli-seconds with no compromise in performance or refinement.

Regenerative braking reclaims energy as you slow down, and uses it to deliver a boost as you accelerate, helping to improve performance. A belt-driven integrated starter/generator (BISG) enables recovery of energy usually lost during braking and coasting to charge a 48-volt lithium-ion air-cooled battery pack.

As with the entire Focus range, the mHEV is available in both five-door hatchback and estate body styles, with both also offered in crossover-style Active guise with a slightly raised ride height.

My test car was a Focus ST-Line Edition 1.0-litre EcoBoost mHEV 125PS, which was finished in ever-popular Magnetic Grey.

Getting comfortable behind the wheel of the Ford Focus is an easy task, as the car’s standard multi-adjustable driver seat and steering wheel offer multiple options. The 1.0-litre three-cylinder EcoBoost petrol powerplant in the Focus made its international debut in 2011 and, since then, has gone on to win multiple awards due to its ingenuity and cutting-edge technology. In mild hybrid (mHEV) form this unit gets a lower compression ratio and a larger turbo, and delivers a little electric boost from low revs to 'torque-fill' while you're waiting for the turbo to wind up. The EcoBoost mHEV engine is capable of propelling the Focus from 0-100km/h in 10.3 seconds, on its way to a top speed of 197km/h (where permitted).

In terms of handling, the Focus continues to rank among the best driver’s cars in the class. The steering is quick, accurate and confidence-inspiring, while there is very little body roll when cornering briskly. Indeed, the well-appointed chassis delivers a composed and enjoyable drive over a variety of road surfaces, while fuel consumption as low as 5.1l/100km (WLTP) on a combined driving cycle is equally impressive. Thanks to a low emission rating, annual road tax is just €180.

The new Ford Focus is a beautifully made, well-equipped and comfortable family car that now adds mild-hybrid engine technology to the mix. Pricing for the new Focus starts at just €21,117 (ex-delivery), with my test car priced from €26,712.