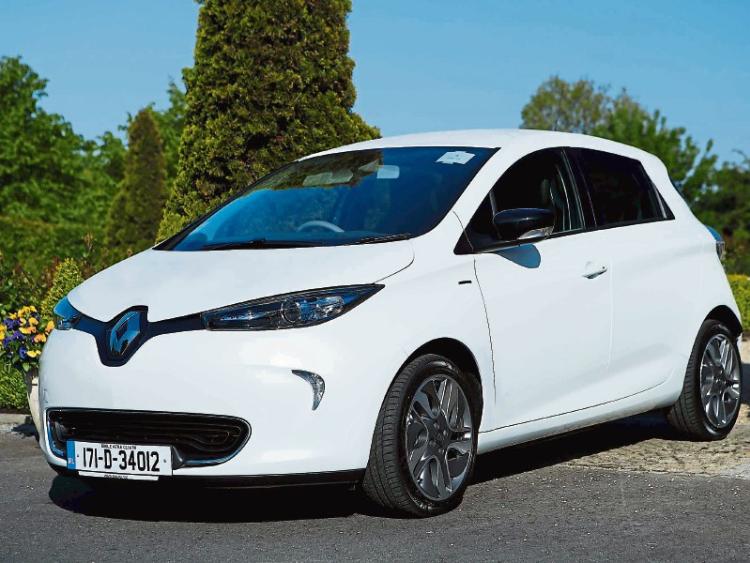 CONCERN over range anxiety has prevented many motorists, especially those who live outside urban areas, from buying an electric car, either as the sole family car, or as a second car.

While Renault’s little 5-door electric city car, ZOE, is easy to charge, has zero emissions, lots of technology features, and some new colours, it’s what is under the car’s skin that has now changed so dramatically from the previous model.

Fitted with the new ZE 40 battery, ZOE now offers double the driving range of the first model launched in 2013 - the longest range of any mainstream electric vehicle of up to 400km (NEDC) which the Irish company estimates to be 300km of range in real-world driving.

Renault says this removes the final psychological barrier that stands in the way of buying an electric car, which is the so-called ‘range anxiety’.

At last week’s press launch of the car with the 40 battery, Jeremy Warnock, Product Manager, Renault Group Ireland, said what people really want to know is if the range will fit their everyday driving be they from urban or rural areas.

He said: “This extended range means users no longer need to worry about charging their car as often and can put it to a wider variety of uses. Using mostly motorways, you are looking at a range of about 200kms.” Degenerative braking helps recharge the battery when you brake so ZOE is ideal for city driving.

The car is now available from €23,490 which includes SEAI grant (€5,000) and VRT relief for the entry Expression Nav version, with a 22kW/h battery. Key specs include Climate Control, R-Link Navigation and the Chameleon Charger. The mid spec adds hands free card, 16-inch alloys and rear parking sensors. The new Signature version is mostly for customers looking for exclusive features and places the focus firmly on style and elegance.

My test drive took in south Dublin suburbs, Dublin hills and a trip around Blessington lakes before heading for Co Kildare and our lunch destination near Athy. When I drove back to our Dublin destination, the trip computer showed 83kms of power left with 183.9kms done since the last full charge. So no, I experienced no range anxiety.

On the road, the R90 electric motor instantly delivers maximum torque of 225Nm producing brisk acceleration and pickup from low speeds. The car can accelerate from standstill to 50km/h, the normal speed limit on city roads, in just four seconds.

There was little or no engine sound, and if you press a certain button on the dash, it becomes even quieter still. I found the car so easy to handle, and it can park in a small space. The whole ambience of the car’s interior is a very comfy place to be in. There’s a good boot, but no spare. Just make sure the engine is turned off before you exit, as it’s easy to leave the car switched on as there’s absolutely no sound.

Patrick Magee, Country Operations Manager, Renault Group Ireland said it’s important to get people into the car to see it for themselves and ‘the Z.E. 40’s long range battery gives people real confidence, and makes the electric car a real option for more people than ever’.

He said: “Renault is offering potential customers a 24-hour test drive programme which gives them the chance to experience this confidence for themselves. Ireland is ready for EVs thanks partly to the size of the country, but also the extensive public charging network - and new ZOE is the perfect car to make the most of this.”