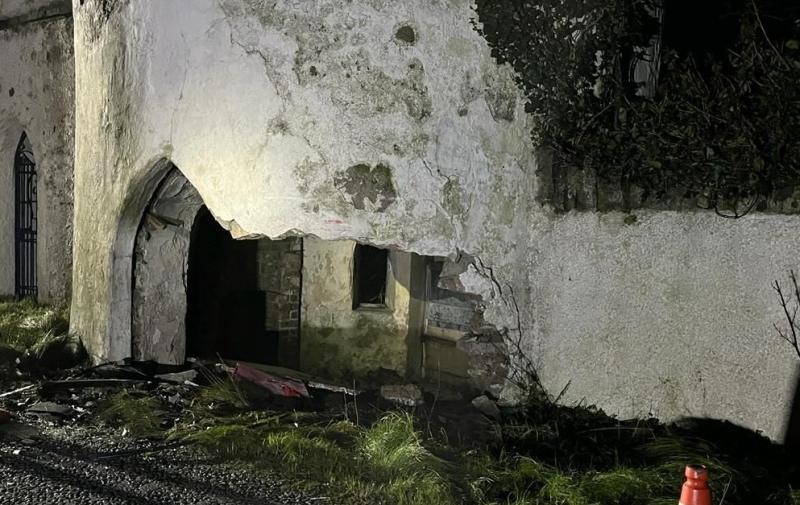 The Bathing Lodge at Glin Castle was damaged

THE N69 coast road between Glin and Tarbert fully reopened to traffic at 8pm last night, following a structural propping up of the Bathing Lodge.

Traffic cones now cordon off the 19th century building and traffic speed has been reduced to 50km an hour on that section of the road.

Following Sunday night’s accident, in which a young female driver crashed into the base of the circular lodge, the road was closed while a full assessment of the damage was carried out under the guidance of Limerick City and County Council.

Contractors worked throughout Tuesday to prop up the building and make it safe and the road reopened at 8pm.

ROAD OPENED The N69 between Glin and Tarbert has reopened following remedial work on a structure damaged in a crash. A 50km/h speed limit is in force near the site. #Limerick

The work of fully restoring the listed building is expected to take place in the New Year.

The lodge, dates from the early 1800s and was used variously as a bathing lodge by the families of the  Knights of Glin and was also inhabited by a local man at one stage.

Known locally as the  Bathing Lodge or Tower or as  the First Lodge, the circular structure is part of the boundary wall of Glin Castle

A large hole was knocked into the base of the lodge when a car crashed into it about 2.30am on Sunday night. The driver sustained injuries in the accident but it is understood, these were not life-threatening.

She was brought by ambulance to University Hospital Kerry. Emergency services attended the scene including two units of Limerick Fire and Rescue from Foynes fire station.

Sunday night’s accident is the second to occur along the same stretch of road this month.

In a previous incident,  a male driver collided with the stone wall on the river side of the N69.