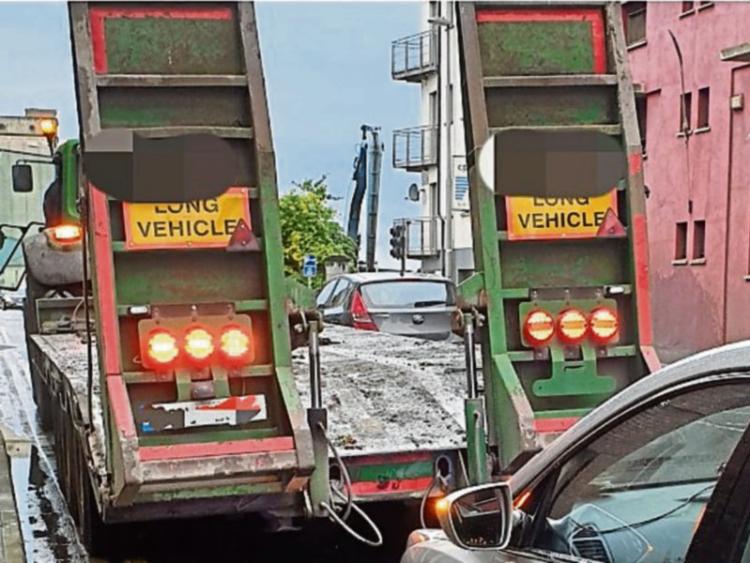 This photograph was posted on Facebook by An Garda Siochana

A TRACTOR driver has been fined after he was observed using a mobile phone while negotiating a busy roundabout in Limerick city near where a woman was knocked down last week.

According to gardai, the incident was detected at Shannon Bridge Roundabout on the Dock Road on Tuesday afternoon.

The driver, who was towing a trailer unit when stopped by an unmarked garda patrol car, will also receive three penalty points if he pays the €60 fine.

The incident was one of a number of incidents in Limerick on Tuesday which have been highlighted by gardai on social media.

Separately, a driver is facing prosecution before the courts after he tested positive for cocaine.

The driver was initially intercepted for a speeding offence after he overtook gardai who were dealing with a separate incident on the M7 motorway.

“This vehicle overtook us at 160 km/h – driving conditions were horrendous with heavy rain, the driver was intercepted a distance later and tested positive for cocaine at the roadside,” said a garda spokesperson.

In another incident of drug-driving, a motorist is facing prosecution after he was detected travelling at 106km/h in a 50km/h zone. Having been stopped, he tested positive for cannabis.

In a fourth incident, a novice driver is facing prosecution after they were detected travelling at 181km/h on the M7 motorway in bad weather.