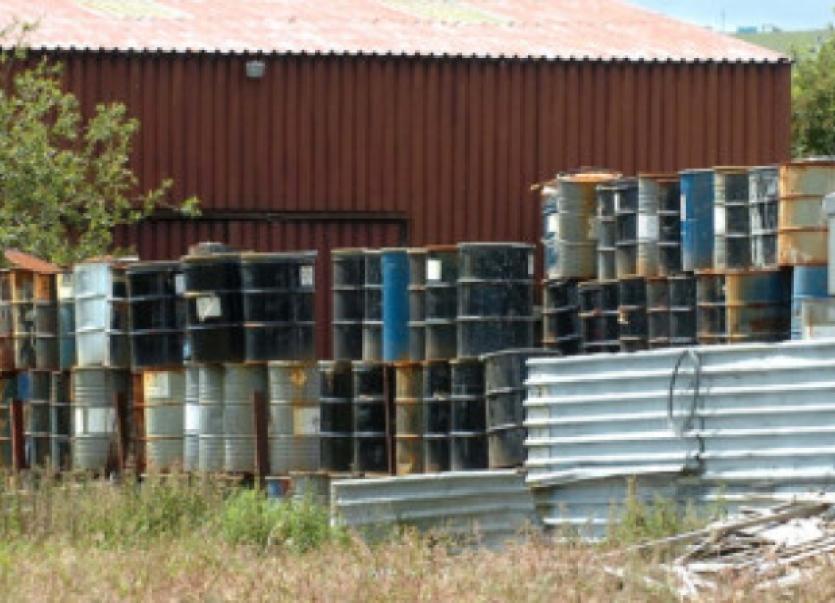 A LONG-running prosecution against a Newcastle West man who has illegally stored hundreds of thousands of litres of toxic paint on his land is nearing a “conclusion”, the local court has heard.

A LONG-running prosecution against a Newcastle West man who has illegally stored hundreds of thousands of litres of toxic paint on his land is nearing a “conclusion”, the local court has heard.

Sean Keating, 71, of Ballintubrid, Newcastle West, has been pursued by Limerick County Council for seven years for his illegal storage of 1,700 barrels of industrial paint in a field adjacent to his  home.

Over time many of the barrels have rusted and disintegrated, allowing their potentially toxic contents to seep into a nearby water supply. The bill for cleaning up the site, which is likely to top €150,000, will have to be paid out of taxpayer resources, the council has warned.

Speaking at Newcastle West court this Tuesday, where an update in Mr Keating’s case was heard, solicitor Will Leahy, prosecuting, said that this “highly complex environmental matter” is one that the council and the court is currently “shepherding through to a conclusion”. Mr Leahy reiterated, however, that the problem “will cost a substantial amount of State money to  rectify”.

The court heard that the council was seeking to adjourn the matter further until next February. Solicitor Kate Cussen, acting on behalf of Mr Keating, said that there had been “progress” on her client’s part, and that a further update would be provided in February.

The case first appeared before the local court in 2006 after the council prosecuted Mr Keating under the Waste Management Act for having a “chemical dump” on his property, just off the main N21 on the old  Barnagh road.

The barrels, which contain 220 litres of either water and oil-based paints each, were the “byproduct” of Mr Keating’s former paint business and had been stored outdoors on the field for a number  of decades.

As these barrels were damaged by the elements over time, the paint contents had either “evaporated, been washed out by rain, or solidified at the bottom of the barrels”, council official Sean Nash previously told the court.

The court also heard on a number of occasions that the issue posed “a long term risk to the environment”, particularly as paint materials had been allowed to escape into a nearby water  supply.

Mr Keating had been working with the council to transfer the contents of the old, rusted barrels into new containers.

However in 2009 Mr Keating “ran out of funds” and the work largely came to a halt. It is now likely that the council will have to step in and pay to finish the clean up, which will cost at least €150,000 and will require that the barrels be carefully removed from the site and sent to Germany for safe disposal.

In May Mr Leahy said that the council had begun to explore the “very tentative idea” that a mortgage would be placed on Mr Keating’s property so that “the public purse could recoup the cost somewhat” of cleaning up the site. To date, Mr Keating has spent in the region of €40,000 cleaning up the property.