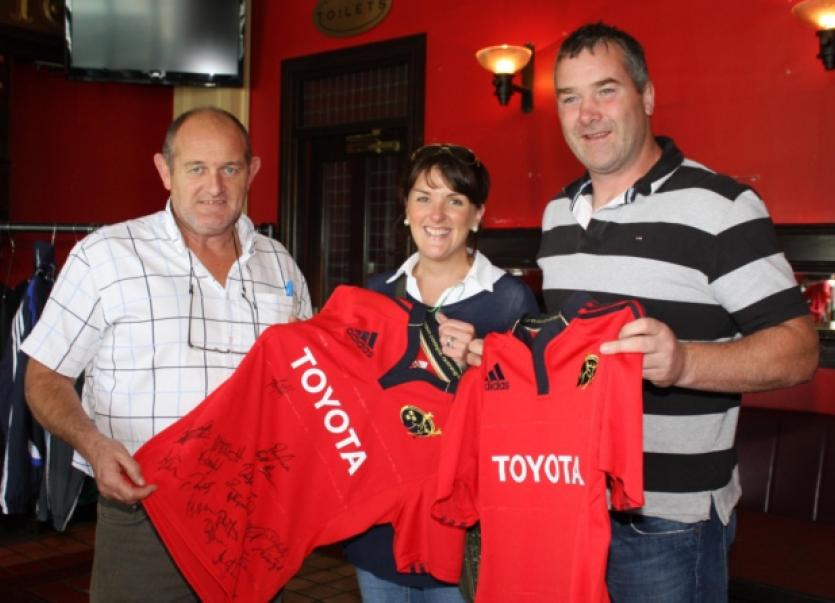 MORE than 1,000 items of rugby memorabilia went under the hammer at Clohessy’s on Friday afternoon, in aid of the Donal Walsh #LiveLife Foundation.

MORE than 1,000 items of rugby memorabilia went under the hammer at Clohessy’s on Friday afternoon, in aid of the Donal Walsh #LiveLife Foundation.

The charity auction, which took place in Peter Clohessy’s bar, was organised by the wife of former Irish star Anthony Foley, Olive and a group of volunteers.

Some of the key items up for silent auction were Conor Murray and Paul O’Connel’s 2013 Lions Tour gear, each with a reserve of €100.

Mrs Foley, who has run “several” similar events, said this year’s charity auction was the most successful because of Donal Walsh’s affiliation to the event.

“It’s a charity sale for a great cause and it’s all for Donal Walsh. He was a great friend of Paul O’Connell’s. Myself and Paul got together one day and decided we were going to do this. Me and my friends have come together in the past and ran similar charity auctions, but this one is one of the biggest because of Donal.

“Because I am married to Anthony, it was very easy for me to get the Munster team on board with the gear, and they were happy to help out. Thanks to them, this has been the biggest charity event yet by a long shot,” she said.

She said there was more than 70 authentic jerseys that were worn by the Munster and Irish team at Six Nations tournaments, RaboDirect matches and Heineken Cup finals. Anyone who bought an item received complimentary Munster rugby socks, once owned by the stars themselves.

“There is a huge queue of people standing outside. We are expecting the jerseys to go first. However, to make it fairer on people, we have a quota of two jerseys per person because we got one person ringing up who wanted to buy all of the jerseys the other day.”

University of Limerick senior lecturer, Dr Eoin McCann said he was glad to spend a few euro on the charity sale.

“It’s all for a good cause and it’s a great way to show support. I want to buy some jerseys but they’re all large and I am not large,” said the former UL Bohs referee.

Olive Foley said Donal Walsh’s mother, Elma Walsh was “delighted” about the event and “insisted” on attending to show support.