Anger as tyres are slashed in Limerick estate 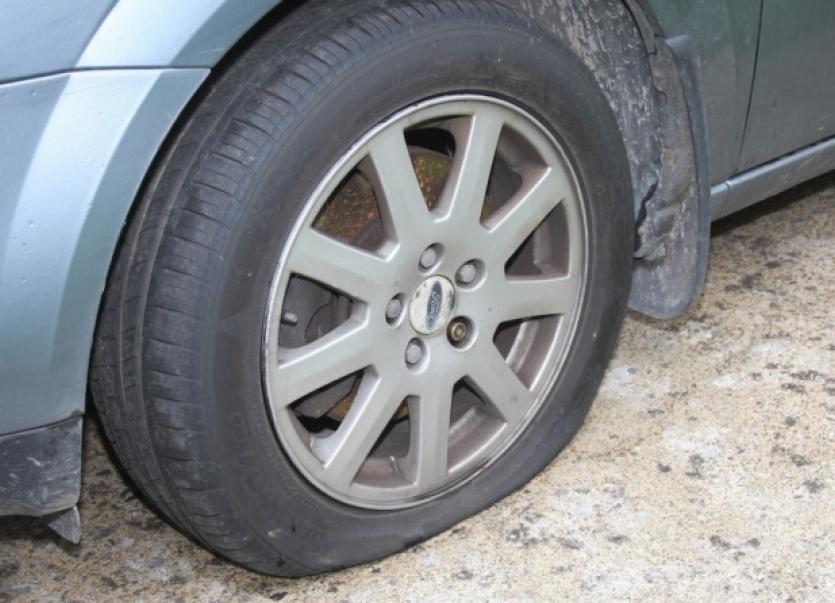 RESIDENTS in one of the city’s largest estates have been left “angry and frustrated” at the slashing of car tyres.

RESIDENTS in one of the city’s largest estates have been left “angry and frustrated” at the slashing of car tyres.

In the early hours of Sunday morning last, the tyres of seven cars were targeted, with vandals causing thousands of euro worth of damage in the Paddocks estate, Westbury.

Now, residents are calling on Clare County Council to install more lights in the estate to make harder to vandals to access.

With more than 900 homes, the Westbury estate is one of the largest in Limerick.

But as it lies just over the Clare border, responsibility for administering it falls with Clare County Council.

But residents feel the local authority is not properly addressing their needs.

One resident - who wished to remain nameless for fear of reprisals - invested €500 of his own money installing closed circuit television and lighting in a bid to catch the culprits.

But although he saw the vandals in action, it was impossible to identify them due to the lack of adequate street lighting, he said.

“A lot of stuff has been going on over the last couple of months. This estate is pitch dark. We are told things should be happening fairly quickly. But nothing has happened. They have replaced lightbulbs, but they have not erected any new ones. The estates are pitch black - the majority of the lights are up in the trees - they do not emit any light down onto the road,” the man said.

Luckily for the father-of-two, his car has not been targeted yet.

But he is concerned if it is, he will not be able to afford to have the tyres fixed.

“I cannot afford to be paying this kind of money. If it is one or two tyres slashed, this is my car off the road for two weeks. I cannot bring my kids from one place to another,” he said.

Although it remains quite bright until late at night in the summer months, the man said he is worried when it gets to winter about the safety of his children travelling to the nearby shopping complex on the main Corbally-Limerick road.

“We are in July now : but come the winter months, when it gets dark at 4pm, you are afraid to let your kids outside the door. You would not even let them run to the shops,” he explained.

Asked why he felt the estate had been targeted, he said: “It is a mystery to me. But I guess you can walk straight through: in and out, and you are gone in seconds. There is no garda presence in the Paddocks either.”

He has been in touch with the two local councillors Cathal Crowe, Fianna Fail and Pascal Fitzgerald, Labour and both are looking into the problems.

Cllr Fitzgerald commented to the Leader: “I am told this is happening all over Limerick. It seems to be a problem with teenage kids with nothing better to do.”