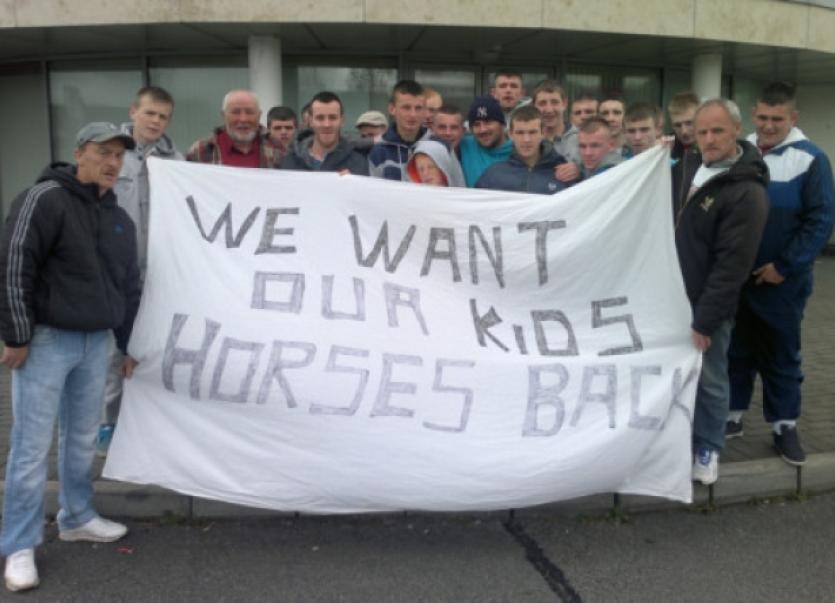 AROUND 40 people staged a protest outside the regeneration offices in Moyross this Wednesday to highlight their frustration and anger over Limerick City Council’s policy of seizing horses in the area.

AROUND 40 people staged a protest outside the regeneration offices in Moyross this Wednesday to highlight their frustration and anger over Limerick City Council’s policy of seizing horses in the area.

A letter was handed in by the protesters, who have offered to sit down with the local authority in the hope of reaching an agreement.

Under current bylaws, the keeping of horses is not permitted without the city boundary without a licence.

However, no licences have ever been issued.

One of the horses seized at the weekend belonged to Donna Cleary’s son, Michael, who drowned while on holiday in Spain a decade ago.

“My son died ten years ago, that was his horse. We have had that horse in that one field for fourteen years. Is that fair, I was heartbroken, it might be worth €50 to the next man but it’s worth a million euros in sentimental value to me,” she told Live 95FM.

Wednesday’s protest by horse owners followed two nights of violence in Moyross which have been linked to the weekend seizures.

Thousands of euro worth of damage was caused on Monday night when a gang of young men wearing balaclavas and armed with sticks and other weapons rode around on horseback for several hours.

Bangers were set off and houses and cars were targeted and a number of doors and windows at St Nessans Community School were also smashed.

“The students are very distraught over it and they are saying it shouldn’t have been done and they really and truly can’t get over the fact that somebody would come in and do so much damage to their school,” said principal Eugene O’Brien who described the incident as “mindless vandalism”.

Parish priest Fr Tony O’Riordan, who attended Wednesday’s protest, described this week’s violence as “idiotic” and he says a resolution to the impasse must be found.

“This issued needs to be sorted and sorted in a way that everybody is happy.”

“I don’t think anybody in the community wants to see the community destroyed and I don’t think the responsible horse owners want that sort of activity and I would be slow to make the connection. I don’t know who was involved in that activity the other night and I don’t know who stoked them up and maybe people are jumping on the bandwagon,” he said.

A spokesperson for Limerick City Council said it had no comment to make on this week’s developments.