Limerick man is distrught as family grave is damaged 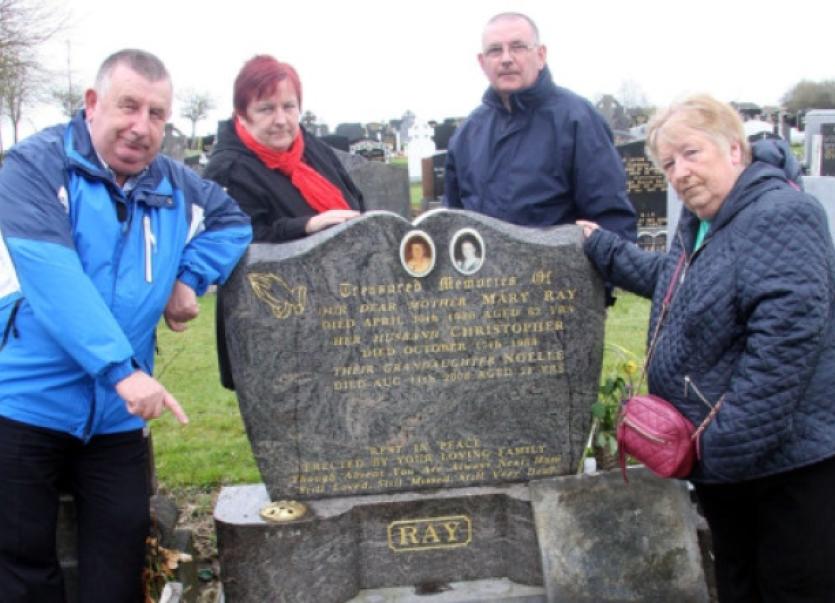 Moyross man Martin Ray is distraught that the grave of his daughter, mother and father was “vandalised” and cleared of all his loved ones mementos by graveyard staff.

Moyross man Martin Ray is distraught that the grave of his daughter, mother and father was “vandalised” and cleared of all his loved ones mementos by graveyard staff.

“My daughter rang me in awful state she said that everything that was on the grave was taken off. We had little slabs and we put on little angels and things as anyone would do,” Mr Ray said.

“At first we thought it was vandalised so we said we’ll wait till Monday to go up and try and find out what happened,” he added.

On Monday they asked two grave diggers what had happened to the grave.

According to Mr Ray the grave diggers responded: “We took them off, we had to take them off because we had to open a grave across from it and we had to back the digger so they had to come off.”

When Mr Ray asked why they did not replace them he was told: “That’s not our job at all.”

Mr Ray then proceeded to take his grievance to the Cemetery Services Superintendent, Flan Haskett.

When asked if the graveyard have any responsibility to replace the ornaments Mr Haskett said: “Absolutely none, they really shouldn’t do it in the first place because we provide a foundation for a headstone. They are entitled to put up a headstone which they do, they are entitled to a six inch margin of flowers it they wish but bringing stuff out on to the grave when there is a grave opposite is just not acceptable and we have to remove it,” he said.

“It shouldn’t be there, they shouldn’t put it there. And they know that but they do it anyway. We tell people not to do it. I’m not saying we’ve told Martin Ray but we’ve told many people. This is a lawn cemetery and once they start putting stuff out in front of the grave that means that we can’t do our work without having to remove it,” he added.

Mr Haskett said that Mr Ray was a couple of feet over his acceptable six inch margin.

“When we have to move in machinery to open a grave which was the situation - which will always be the situation that’s the only reason we would move it. It’s not suiting us to move it because it’s work for us and it’s inconveniencing us greatly. Much and all as we’d rather not do it we have to do it,” said Mr Haskett.