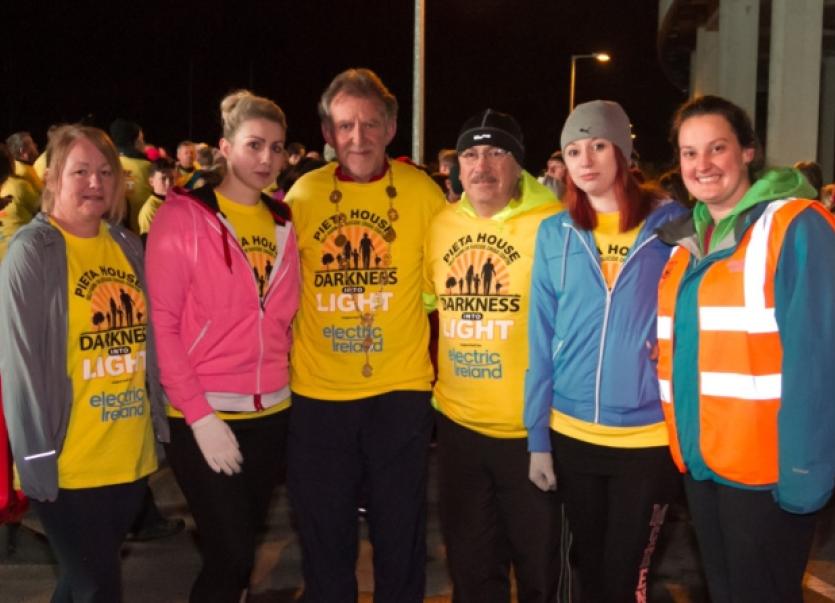 THOMOND Park is well accustomed to seeing a sea of red march over the bridge.

THOMOND Park is well accustomed to seeing a sea of red march over the bridge.

But in the early hours of Saturday morning there was a sea of yellow unlike any ever seen before in the city, as some 10,000 people took part in Darkness into Light.

It is the highest number of people who ever took part in the event in the city, to raise awareness of suicide, depression, self-harm, and help promote and fundraise for the work of Pieta House, the suicide prevention charity.

In all, some 15,000 people took part in the event across Limerick, including 3,000 in Newcastle West and 2,000 in Kilmallock. The metropolitan Mayor of Limerick, Cllr Michael Sheahan was among those who donned his yellow t-shirt and light a candle on Howley’s Quay in the shape of the word ‘Hope’ for an increasingly worthy cause. As his term ends this June, he said the event will be one of the highlights of his mayoralty, and it was his first - but not last time taking part.

“It was a wonderful occasion, so unique and so special. It really is a very important event to show solidarity with people who are at the coalface of difficulties in their lives. The amount of people who turned out, in particular young people, was amazing,” he told the Limerick Leader, and paid tribute to the teams of volunteers who patrol the river many nights of the week to prevent loss of lives.

Sadly, two women were reported to have entered the river over the weekend, after the Darkness into Light walk, and searches remained ongoing last night to find the second woman, who was seen entering the Abbey River at around 4am on Sunday. Search and rescue teams successfully rescued another woman from the river earlier on in the night.

Mayor Sheahan said he was extremely sad to learn of these two events, but said they only emphasis the ongoing need for organisations such as Pieta House, which now has 10 centres throughout the country. Kieran O’Brien, Darkness into Light project team, said the turnout in Limerick was “amazing brilliant” and emphasised that “the volunteers are the backbone of our organisation.” The 5km walk got underway at 4.15am on Saturday morning in 80 locations in Ireland and across the world.