Over €200k raised from Limerick’s three walks into the light 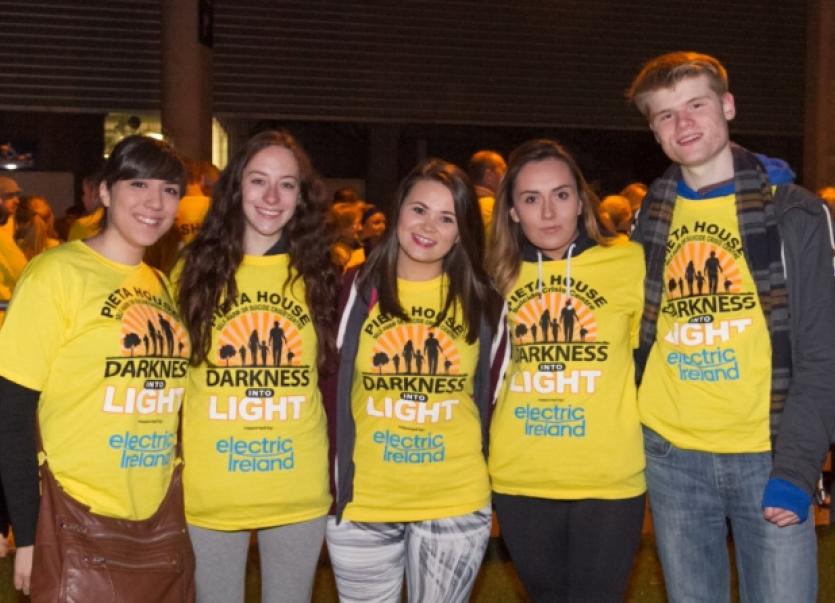 WELL over €200,000 is expected to have been raised for suicide prevention and awareness services in Limerick, after a series of Darkness into Light walks took place across the county last weekend.

WELL over €200,000 is expected to have been raised for suicide prevention and awareness services in Limerick, after a series of Darkness into Light walks took place across the county last weekend.

While the final figure has yet to be tallied, the figure raised is set to be the highest yet.

A spokesperson for Pieta House told the Limerick Leader that €130,000 was raised in Limerick city last year, with an additional €40,000 coming from the Newcastle West walk.

“With the addition of the Kilmallock walk this year, and huge numbers taking part across all locations, we would expect the amount could be over €200,000,” said a spokesperson.

While the funds raised are vital in continuing to support the work of Pieta House, its organisers and those who take part believe the awareness raised of suicide and depression is even more valuable than monetary gain.

It is also a hugely symbolic and poignant event for people whose lives have been touched by suicide, or who have battled with depression themselves.

Thomond Park is well accustomed to seeing a sea of red march over the bridge.

But in the early hours of Saturday morning last there was a sea of yellow unlike any ever seen before in the city, as some 10,000 people took part in Darkness into Light in the city alone.

In all, some 15,000 people took part in the event across Limerick, including 3,000 in Newcastle West and 2,000 in Kilmallock. The metropolitan mayor of Limerick, Cllr Michael Sheahan, was among those who donned his yellow T-shirt and light a candle on Howley’s Quay in the shape of the word ‘Hope’ for an increasingly worthy cause.

As his term ends this June, he said the event will be one of the highlights of his mayoralty, and it was his first - but not last time taking part.

“It was a wonderful occasion, so unique and so special. It really is a very important event to show solidarity with people who are at the coalface of difficulties in their lives. The amount of people who turned out, in particular young people, was amazing,” he told the Limerick Leader, and paid tribute to the teams of volunteers who patrol the river many nights of the week to prevent loss of lives. Sadly, a number of women were reported to have entered the river over the weekend, after the Darkness into Light walk.

Mayor Sheahan said he was extremely sad to learn of these events, but said they only emphasis the ongoing need for organisations such as Pieta House, which now has 10 centres throughout the country.

Kieran O’Brien, of the Darkness into Light project team, said the turnout in Limerick was “amazing, brilliant” and emphasised that “the volunteers are the backbone of our organisation” .

The 5km walk got under way at 4.15am on Saturday morning in 80 locations in Ireland and across the world.

Walkers in Melbourne and Perth were amongst the first cities to set off, with an estimated 4000 people walking in Australia.

They were closely followed by London, Manchester and Glasgow where almost 1500 people walked in cities across the UK. The walks finished up in New York, Toronto, and Chicago amongst others where it’s estimated that 1700 people participated in the walk.