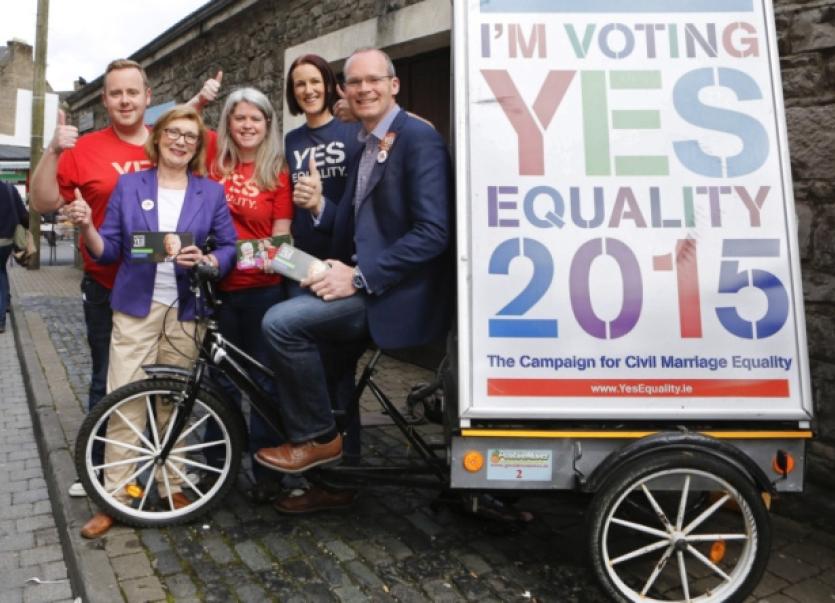 with the marriage equality referendum now just days away, those urging a ‘yes’ vote have upped their campaign.

with the marriage equality referendum now just days away, those urging a ‘yes’ vote have upped their campaign.

Fine Gael and Labour have brought out their most prominent politicians locally to persuade the public to vote in favour of recognising same sex unions across Ireland.

Speaking to the Limerick Leader, Ms O’Sullivan said she is “confident, but by no means complacent” of the country backing the constitutional change.

“I am aware of the history of referenda. Often they become more equal as time goes on, in terms of the changes in the voting intentions of people,” she said.

Ms O’Sullivan says her Labour party has teamed up with members of Yes Equality Limerick to ensure as much of the county is canvassed as possible ahead of polling day.

“I have to say I am getting more positive than negative [reaction]. There are some people who are clearly telling us they are voting no, and gave us their reasons. But the majority of people I have spoken to have been very clearly yes-minded,” the Education Minister said.

She warned that a low turnout could see the no vote prevail, adding: “With most referenda, you don’t always get a very high turnout. I think our job really is to get the vote out now and keep canvassing right to the end to ensure this referendum is passed, and passed well.”

This Tuesday, the national Yes Equality bus visited Limerick to campaign for a yes vote in the referendum.

Local spokesperson Sharon McMeel said: “The people of Limerick have the chance to take part in a once in a generation moment by making their voices heard on May 22 in the Marriage Referendum. We are already overwhelmed by the level of support in Limerick for the campaign and with today’s visit we hope to make more people aware of how important their vote is and they can lend their support over the coming weeks”.

Also on Tuesday, a yes rally was held at the Absolute Hotel.

The BeLonG to Youth Services, a coalition of organisations including Barnado’s, Youth Work Ireland, the Migrant Rights Centre, Headstrong and Pavee point called on local people to back the referendum.

Speakers at the event included young people and parents of lesbian, gay, bisexual and transgender (LGBT) young people, as well as staff from BeLonG To, YES Equality and GOSHH.

Meanwhile, one of Limerick’s youngest councillors, Cian Prendiville, 26, has urged young people to make their voices heard in both of Friday’s referendums.

It comes as a poll carried out by ‘Thinkhouse’ showed 90% of 18 to 35 year olds supported marriage equality, but also showed almost half may not turn out on the day.

“All the polls show that young people are the ones most strongly in favour of marriage equality, and the most progressive on other social issues such as abortion rights. Therefore we have a huge responsibility on our shoulders to fight to change society, and that can start by making sure we win a YES vote to marriage equality. I know for many young people marriage is not really something they are thinking about, or may ever want, but we must recognise the significant message this referendum result will send,” he said.

Referendum day is this Friday, May 22.