Paul and JP line out for Team Limerick Clean-up 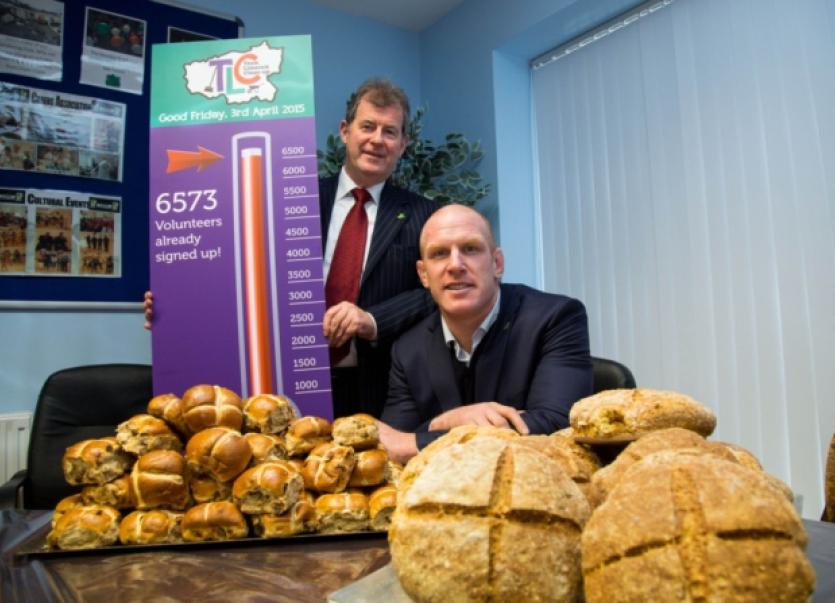 WITH a broad smile emblazoned across his face, Ireland’s rugby captain was led from group to group by Linda Ledger, who had a gentle grip on his arm.

WITH a broad smile emblazoned across his face, Ireland’s rugby captain was led from group to group by Linda Ledger, who had a gentle grip on his arm.

Paul O’Connell was in St Munchin’s Community Centre this Tuesday to announce the latest volunteer numbers for the Team Limerick Clean up initiative - now more than 6,500 in total.

The Limerick man, fresh from success on the pitch against England, proved a popular draw with the hundreds of locals who turned out to greet him in Kileely, as he happily posed for pictures with an adoring public.

He laughed when speaking to the Limerick Leader, noting that the crowd were more interested in fellow guest JP McManus and what tips he might have for next week’s racing in Cheltenham.

But there was only one star in the room, and it burned green and red.

Teresa McMahon from Thomondgate said she was “delighted” both to meet Paul and to get “a kiss from him”.

Kileely’s Mary Moore said she got “two kisses, I love him”. She said she watched Sunday’s Six Nations clash with some trepidation.

“I’d be worried to death when I see Paul going in, but I won’t worry no more now – look at the size of him!” she laughed.

The man himself clearly revelled in the atmosphere, which he said was “great fun”.

“The funniest thing is the way everyone is plaguing JP for tips, no one wants to talk about the match, they all want to find out about Cheltenham from JP – who the winners are going to be. He isn’t giving anything away,” laughed Paul as the Martinstown racing magnate looked on.

Paul and JP were in St Munchin’s to announce further details of the Team Limerick Clean-up, which they have spearheaded along with Helen O’Donnell, chair of the City Business Association. Almost 7,000 volunteers have signed up to take part in the innovative anti-litter campaign taking place on April 3.

Paul said it was a “simple initiative and people have bought into it.

“It is easy to understand and follow – you come out on Good Friday, you get your kids out, you get whoever out, your local club and it is three or four hours of cleaning up,” he said.

“You would love for it to be second nature for people to tidy, clean, to be proud of where they come from and look after it.”

Limerick’s largest ever tea and coffee morning will also take place as part of the event, which JP said was about making it a “social occasion”, adding that the momentum behind the event, supported by the council and this newspaper, was “marvellous”.

“Never in our wildest dreams did we think we would have so many people who would volunteer to give up their time,” he said.

“Hopefully we have started something but we have to make sure that this year works well first,” he added.