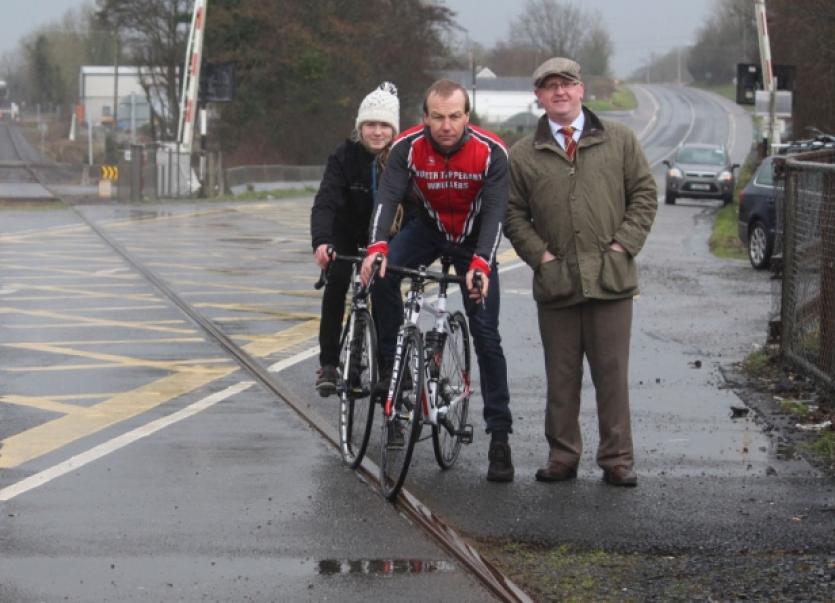 A litany of serious incidents involving cyclists being thrown from their bikes have occurred at Lisnagry railway gates as they cross over the tracks.

A bike shop owner said he has heard of a minimum of 10 people who have fallen in recent months, including a garda superintendent who was left unconscious

Solicitor and former Limerick hurler, Turlough Herbert said there is an incident almost once a day at the railway gates, which he described as “just lethal”. When he was a boy he said he came off his bike there and was nearly rolled over by a cement lorry.

David Bourke, PRO of Limerick Cycling Club, got in touch with the Leader to say the level railway crossing at Lisnagry is all too well known to their members as well.

“Over the years a substantial number of our members have fallen at this location and, indeed, some have incurred serious injuries. The extent of falls that have occurred here is such that it would be safe to say that every member of our club, if they did not fall there themselves, would at least have been part of group which would have witnessed another member taking a fall at this location.

“This level crossing’s construction and design, by virtue of the fact that the road and rail track merge diagonally thereby creating a groove which a cyclist’s wheel can easily get caught in, is clearly not suitable or safe for cyclists,” said Mr Bourke. As a result of the numerous falls the club has introduced a policy of dismounting at the crossing.

“However, this policy is less than ideal as dismounting in large groups on a highway is often impractical and can create its own dangers,” said David.

There is an Iarnrod Eireann sign with the warning, “Cyclists should dismount through the level crossing”, which Limerick Cycling Club acknowledges.

However, they say it is quite small and inconspicuous.

“In addition, we would feel that signage is not really the solution as experience has shown that inevitably cyclists, unsuspecting of how serious the problem is, will still attempt to ride over the tracks, particularly if they are not familiar with the area. “The volume of cyclists using the road surely merits a more satisfactory solution that is in keeping with the public initiatives to encourage smarter and healthier travel,” said Mr Bourke.

“We appreciate and welcome the public money spent in recent years on delivering a cycle lane on the N7 between Limerick and Nenagh and it is clear for all to see that all types of cyclists are using this facility in the nature it was intended.

“However, it has been observed that the cycle lane gathers and accumulates debris from the nearside ditch as well as from the main road lane.

“In order to make the new cycle lane a safer and more user friendly facility it would benefit from more regular sweeping and maintenance.

“Furthermore, we would express some concern about the works associated with the gas pipe-laying that is currently under way further out this road, in particular, the quality of the reinstatement works to the road surface over the width of the trenches, which are being cut right in the middle of this newly formed cycle lane,” said Mr Bourke.