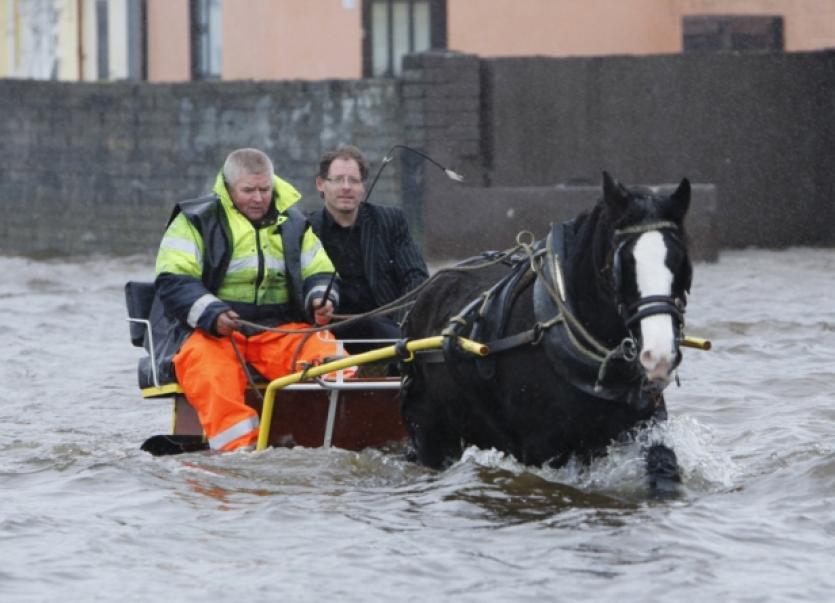 A CITY man received civic recognition in the mayor’s office for his humanitarian efforts during the King’s Island floods last year.

A CITY man received civic recognition in the mayor’s office for his humanitarian efforts during the King’s Island floods last year.

St Mary’s Park man, Gerard Hogan was hailed as a “hero” at Thursday’s reception, for carrying an estimated 200 flood victims in via horse-and-cart, as the Shannon banks broke in February 2014.

In attendance with his family at the event, Mr Hogan said that he “would do it all over again.

“It was lashing rain on the morning, and I walked outside and all I saw was the streets flooding, and I saw people trying to go to the city but they couldn’t. And that’s when I decided to go back in home, get my horse and cart and get the people across the water, and get them to Asumpta Park so they could get the bus. I helped people to get their messages and I brought two people to see their doctors,” he told the Limerick Leader

Speaking at the civic reception, metropolitan mayor Cllr Jerry O’Dea commended the 58-year-old for his efforts.

“A lot of his efforts were seen in pictures at the time. He’s a very sincere and genuine man. I asked him to come up and say a few words, and one of the first things he said was that he would do it all again. To me, that embodies the spirit of Limerick people and what we are about, and when things do get bad, people row in and help their neighbours and friends. It’s another aspect of our fantastic city, that I am proud of.”

He said that he is encouragin g people to come forward to recognise the “unsung heroes” within their own communities.

“A lot of what we are trying to promote over the last year was the positive aspects of our people, our place and a lot of that is coming together,” he said.

Also at the reception, Labour Cllr Frankie Daly said that Mr Hogan’s “selfless act” was a great case of charity.

“I think this is a fantastic occasion, and we don’t do it enough. He is truly admirable. This defines Limerick. In the working classes areas, in times of trouble, they really row in.

“Ger personifies that, and he is a hero within St Mary’s parish and within Limerick. He’s kind of an idol for every citizen in Ireland.

“I am very pleased to be involved to mark the presence of Ger, and it’s guys like him that make Limerick what it is. He is part of the fabric of the city, and he personifies what it is to be local and what it is to be communal, and I take my hat off to him and give him great credit. I am proud to be in his presence. It’s about Ger today, acknowledging that he is a hero,” he explained.

Though his home on St Ita’s Street avoided high waters, houses only one street away suffered from three-foot floods, said the St Mary’s Park resident