Jail for man who tried to knock down Limerick gardai 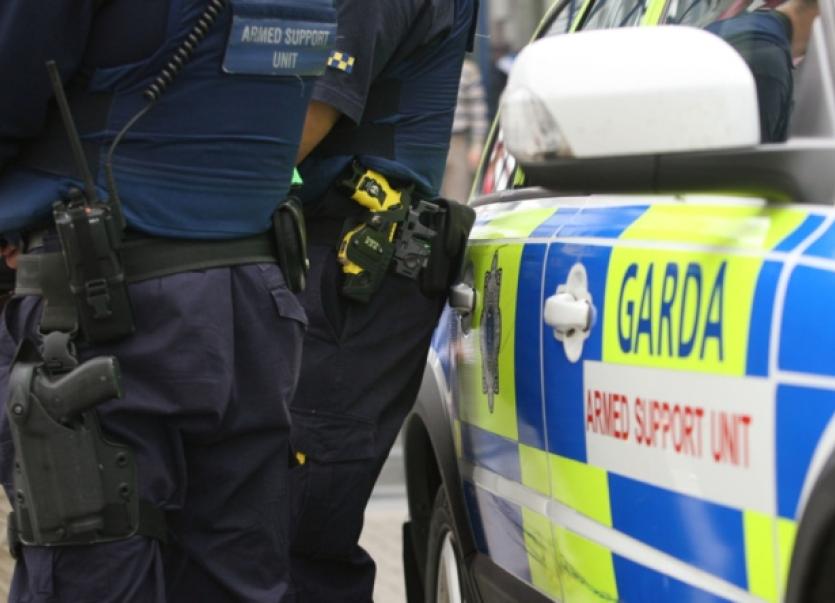 AN out of control young man who deliberately tried to knock down a garda - forcing him to jump into a ditch - during a high-speed pursuit across the city and county will be spending Christmas in prison after he was jailed for three years.

AN out of control young man who deliberately tried to knock down a garda - forcing him to jump into a ditch - during a high-speed pursuit across the city and county will be spending Christmas in prison after he was jailed for three years.

Sentencing Michael Harty, aged 22, of William Street Lower, Nenagh, Judge Tom O’Donnell commented it was the “absolute luck of God” that nobody was killed or seriously injured during two separate incidents last year. Harty, who turns 23 on St Stephen’s Day, pleaded guilty to multiple charges, including “intentionally or recklessly” engaging in conduct, which created a “substantial risk of death or serious harm to a number of gardai.

During a sentencing hearing, Limerick Circuit Court was told the first incident happened in the early hours of October 19, 2013. Garda Daniel Murphy said a colleague of his - Garda Gary Farrell - encountered a stolen car being driven by the defendant at Lenihan Avenue, Ballinacurra Weston at around 1.20am.As Garda Farrell approached the Volkswagen car, it “took off at high speed” forcing him to jump out of the way.

Garda Murphy told John O’Sullivan BL, prosecuting, that at one stage gardai had “boxed in” the Volkswagen, which had been stolen in Glin, but that Harty deliberately rammed a garda patrol car in an effort to escape. The second incident, the court heard, happened less than a fortnight later.

Garda Murphy told the court the defendant was initially observed driving a high-powered Chevrolet SUV through a red light at the junction of Wolfe Tone Street and O’Connell Avenue.

After gardai pulled alongside the vehicle near the Redemptorists Church on Upper Henry Street it “took off” before travelling onto the Dock Road and out the N69 towards Mungret and Clarina.

In the townland of Kiltemplan, Harty stopped the SUV and deliberately reversed at the garda patrol car, forcing it into a ditch.

Harty continued travelling in the direction of Adare before pulling into the yard of a commercial premises near the Woodlands House Hotel. There, the defendant drove deliberately at the patrol car which was in pursuit in an attempt to disable the vehicle.

“The gardai were in great fear for their safety,” said Mr O’Sullivan who told the court the SUV was a “high jeep which was fitted with bull bars at the front”.

The pursuit then continued to Fanningstown, Adare where Harty again stopped and reversed at speed at the patrol car.A second garda unit, which arrived in the area to provide assistance,was also rammed the court heard.

Garda Murphy “narrowly avoided” being knocked down as he jumped into a ditch as the SUV was being driven at him,

Judge O’Donnell was told the SUV, which was carrying four passengers, was eventually stopped a short time later at Caherass Cross on the outskirts of Croom after members of the armed Regional Response Unit deployed a stinger device at a roadblock.

Following a violent struggle Harty was arrested at which point he told gardai he had been drinking and had consumed a “ball of Xanax” earlier in the night.

However, Mr O’Sullivan said an analysis of the defendant’s blood showed he was under the legal alcohol limit and that no evidence of any drugs had been found.

In his direct evidence, Harty said he was sorry for what happened and that “I didn’t mean for it to happen.” However, his evidence was rejected by Mr O’Sullivan who put it to Harty that he had used the two cars as “deadly weapons” and had “intended to cause damage to property, life and limb”.

Andrew Sexton SC, defending, said his client has reflected on his conduct while in prison and has “put his hands up and apologised. He said Harty’s guilty plea had saved considerable court time as any trial would have been lengthy and complex.

Imposing sentence, Judge Tom O’Donnell said the actions of the defendant on both occasions had been “outrageous in every sense of the word”.He imposed prison sentences totalling four years, suspending the final year for five years. Harty, who was disqualified from driving at the time of both incidents was disqualified for 10 years.