Limerick man’s fears for his children over ‘unsafe’ ceiling 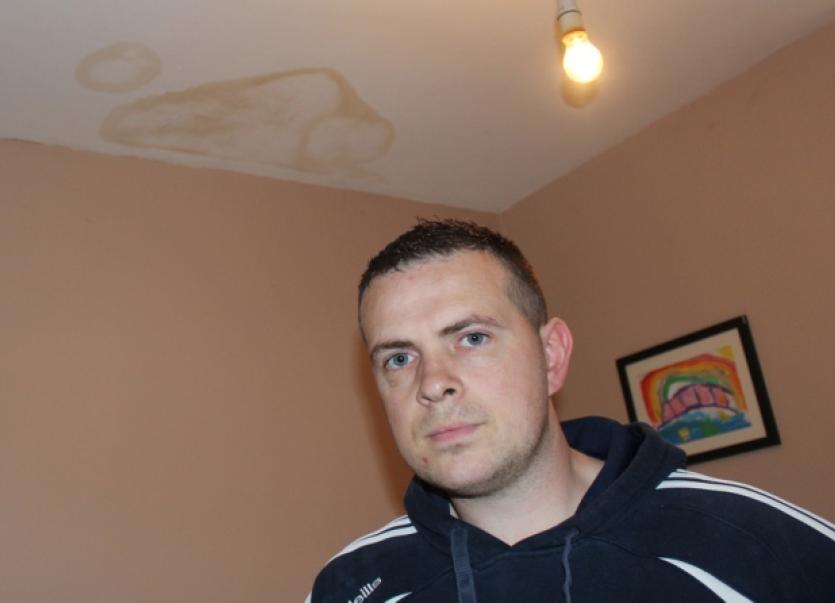 A MOYROSS man says he “fears for his children’s lives” after the house next to him in Pineview Gardens was knocked down.

A MOYROSS man says he “fears for his children’s lives” after the house next to him in Pineview Gardens was knocked down.

Alan Daly has been living in Pineview for the last eight years, and wants to stay in the northside estate where he was born and raised.

The house next to him was demolished early this year, and since then, the father-of-two says he has had problems with heating the house.

But more worrying for the 29-year-old, he says a hole opened up in the roof which allowed rocks to fall into his attic.

Now, he says the ceiling is so weak, they could fall on top of his head causing injury or worse to him, or his two children, AJ, 2, and Amber, 5.

After the neighbouring house was demolished, slate were knocked off his roof, causing a hole to open up to his house.

Rocks, bricks and slates, he claims, fell into his attic and rested there, while his ceiling has damp stains on it causing it to weaken.

“I am not complaining for nothing. The ceiling is on a dip, it could fall at any moment. If that does come down, it will come down on top of me or one of my kids. It is like having a net, which will eventually break, and it is full of rocks. It is only a matter of time before someone gets hurt,” he said.

“I want to see the council come out, take the ceiling down where it is broken, fix it, and show me that it won’t fall down on top of me and my children.”

Alan says he has invested €25,000 into his council house doing repairs in an attempt to keep the heat in.

He also said that the council is refusing to insulate his home as it is earmarked for demolition - but this is something a council spokesperson has disputed.

“Since they knocked the house next door, it has been far colder because the other house used to block the wind. My heating bills have gone a lot higher as a result.

“I am spending a lot more on coal and blocks for the fire. It seems like when you light the fire, the heat is just gone,” Alan said.

During the course of the works - which lasted for around a week - Alan says he experienced a lot of disruptions.

“There were bricks flying into my back garden, and front garden. They punctured a paddling pool I had with the rocks falling on top of them. They have busted the drain pipes. They have destroyed my car windows with dust. You could not even sit in the front garden because of the dust,” he said.

He says he is “disgusted” with the council, who he rents the two-bedroom, terraced house from.

A spokesperson for City and County Council said it does “not accept many of the issues raised by Mr Daly.

“However, the Council is engaging with him in respect of insulation works to the property at Pineview Gardens.”