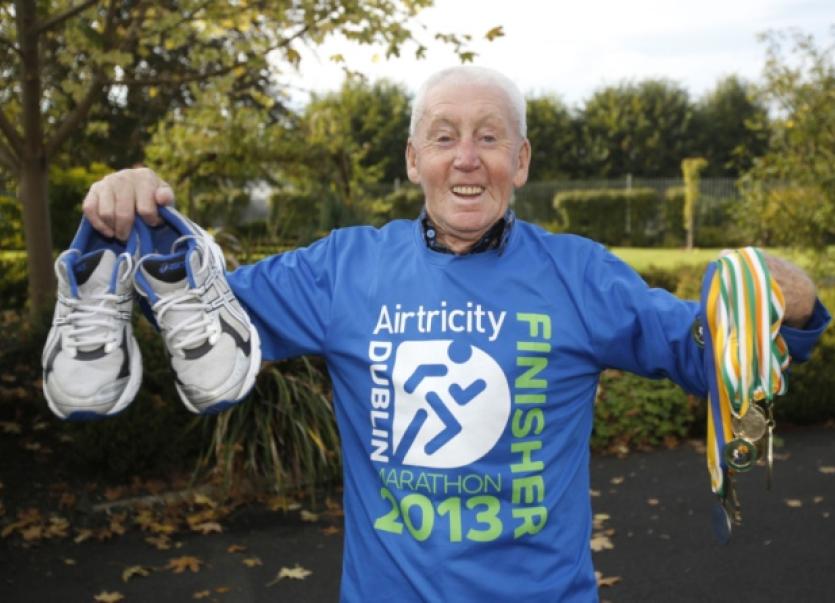 LIMERICK MAN John Collins will lace up his marathon shoes for the last time in two weeks when he lines up to run in his 30th Dublin marathon in a row.

LIMERICK MAN John Collins will lace up his marathon shoes for the last time in two weeks when he lines up to run in his 30th Dublin marathon in a row.

John, who features in a promotional video for the upcoming Dublin City Marathon, has become an inspiration to runners half his age - who are bowled up by his stamina.

The runner from Church Street, King’s Island, who only started running in his 50s, will be joined on the starting line by daughter Fiona and his son-in-law for the gruelling 26.2 miles around Dublin on the Bank Holiday Monday, October 27.

It will be his 30th Dublin marathon, and his 42nd marathon to date.

John ran his first Dublin marathon in 1984, at the age of 52, and has run the race every single year since.

In the three decades since he hasn’t looked back, and hasn’t stopped running, also taking in marathons in Boston, New York, Connemara, Belfast, Limerick, and London marathons.

“I guess you have to call it a day sometimes, and finish in one piece.

“My hips are still Okay, so are my ankles and my knees. I’ve been very lucky with injuries - I’ve had none at all!”

“I’m looking forward to Dublin now. I did it in under seven hours last year - jogging and walking - I’m not as fast as I used to be! But I’d like to do it in six and a half hours this year,” he told the Limerick Leader.

On the day of the race, he’ll have toast, scrambled egg and just a cup of tea. Anything extra is too much, he said, as you get plenty of drinks and sweets for sustenance along the course.

The widower, father of five and grandfather of 10 trains three times a week, generally going walking on Tuesdays, runs five miles on Wednesday, and runs another five miles on Saturday morning with the country club on the Old Cratloe Road.

He said he was “over the moon” when he ran his first marathon and “didn’t stop once” during the race. “I flew through it,” he enthused.

“I’m 30 years running now. I will be sad when I leave it all behind me but then I’ll have the memories to keep me going but thank God I had some great years. You never say never, I might do one more,” he laughed.

Asked what’s the secret behind his fitness, Johnny, as he is known to friends, says it down to looking after himself - and the occasional pint of Guinness in the Locke bar. He likes to go out three times a week and advocates two pints of Guinness the night before a race - but no more!

“I’ve looked after my body well and I control myself. You could chance two nice pints of Guinness,” he said, but he will retire to bed by 10.30pm at the latest.

If running the marathon wasn’t enough, he will also take part in the breakfast run, a 3.6km run the day before the marathon.

His running mates in the Limerick Country Club Athletics Club member paid tribute to his longevity and endurance, saying: “He has a really good attitude to life and he just seems to be years younger than he actually is.”

“I’ve never heard him say ‘It’s too wet. it’s too cold [to go out running], or this is a tough run’,” said his friends, in the online video for the race, which is attracting huge attention online.