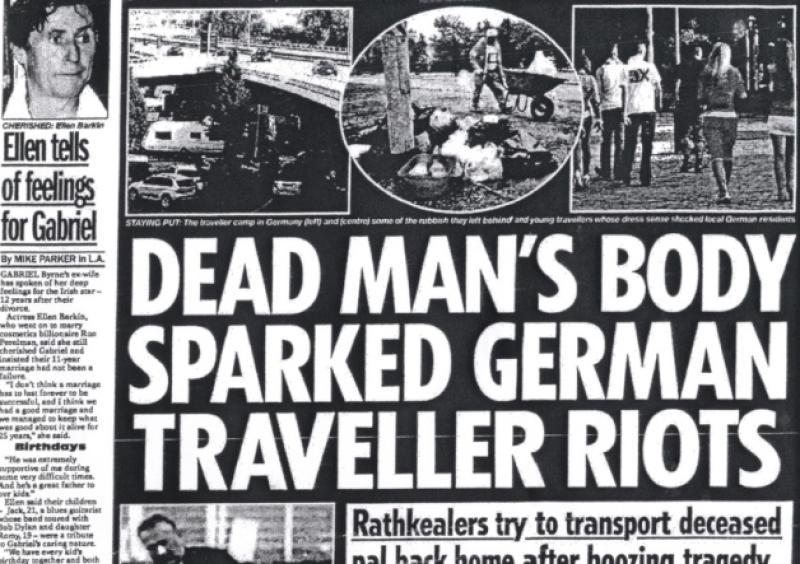 A GRIEVING Traveller widow has begun giving evidence in a defamation case against the Sunday World, following a “sensational, sexed up article” focusing on the death of her husband in Germany four years ago.

A GRIEVING Traveller widow has begun giving evidence in a defamation case against the Sunday World, following a “sensational, sexed up article” focusing on the death of her husband in Germany four years ago.

Judge James O’Donohoe has begun hearing evidence at Limerick Circuit Court taken by three plaintiffs against Sunday Newspapers Ltd - Kathleen Hegarty, the widow of the deceased Patrick Hegarty; and her brothers Dan and James Quilligan, all residing at Roches Road in Rathkeale.

The headline on the article that Sunday read: “Dead man’s body sparked German Traveller riots,” with the sub-headline: “Rathkealers try to transport deceased pal back home after boozing tragedy.”

None of the plaintiffs are named in the article, though Ms Hegarty is referred to in one paragraph in the article written by the journalist Eamon Dillon, who has written two books about Travellers.

It read: “According to the custom of the conservative Rathkealers, the dead man’s 27 year-old widow would be expected to return to live with her parents because she has no children and would not be expected to marry again.” Ms Hegarty, now 33, accepted this to be the case, but maintains that the contents and nature of the article defames her and her family in relation to the repatriation of his remains, which were done in accordance with the law. “My husband is a part of me. I feel they are referring to me also,” she told the court this week.

She said she is also a ‘Rathkealer’, a term used in the article, and was partly responsible for arranging to bring his body home, but she said there was never any question of bringing his remains home in the back of a van.

Her defence, Peter Clein, said it is part of a tradition of members of the Travelling community to converge on Cologne every year. Ms Hegarty said that up to 300 Travellers from Rathkeale were there on this occasion and she was not aware of any riots or any arrests among her group. While there, Patrick Hegarty, 37, died of a heart attack on Holy Sunday, April 24, 2011. She said he was hitching the caravan up to the car when he collapsed and she immediately put him into a taxi, which had been dropping other people off at the site underneath a motorway.

Mr Clein said the following day contact was made with Cross’ funeral home in Limerick and arrangements were made for repatriation. His body arrived on April 28, her birthday, from Frankfurt to Dublin and he was buried a week later.

Taking to the witness box, Ms Hegarty said she now is settled Traveller and lives in a caravan on her grandmother’s yard. “I’m a widow for the rest of my life in Rathkeale because it’s against my tradition to do anything else,” she said.

“I knew my husband would have a respectable, high class funeral. It was one of the biggest funerals in Rathkeale and there wasn’t a glass broke,” she said.

She said when the article was read to her, as she can’t read fully, she felt “ashamed, disgraced, angered. My husband was still in Cross’ at the time. I felt low in myself and my husband, that people would think that of us.”

She said she rang the Sunday World and told them “it was disgraceful”. “The shame and disrespect I felt for my husband as much as myself, that people might think I tried to bring my husband’s body home in the back of a van.

“I’m glad he [Eamon Dillon] never answered the phone-call. I can’t remember what I said but I left a lot of emotion.”

She said no reply was received from the newspaper, following her call, and later a solicitor’s letter was sent. There was no clarification or retraction given by the newspaper.

It was put to her by Jack Nicholas, BL, for Sunday Newspapers Ltd, that there was no defamation in this case, and also that she was not involved in organising the transport of her body as she was too upset and had to be sedated. “A women never really has decisions in men’s things,” she replied. However, she added that she helped to choose his coffin.

“You were not defamed by this article,” said Mr Nicholas. “You are only referred to as the widow of the deceased. It [the article] doesn’t even suggest you were in Cologne at this time.”

He said it was an “incredible leap” for Ms Hegarty to suggest that it was somehow intimated that she was involved in an attempt to bring the body home.

Tim Sheils, a witness presented by the plaintiffs, and a peace commissioner, said he was “disgusted” by the article. “What they said about bringing home the body in a van - it is not Traveller culture, not with the funerals I have seen through the years. They have been organised excellently, with great respect. You should see the funerals in Rathkeale - they are absolutely fantastic,” he said.

A second witness, James O’Brien, who is married to the first plaintiff’s aunt, said he was “shocked when I read the paper that they would print something like this, that you’d put a dead man into the back of a van. You wouldn’t do that to an animal.”

Taking to the stand, Mr Dillon was repeatedly asked by Judge O’Donohoe why the term ‘boozing tragedy’ was used in the sub-headline, and said that it suggests that he might have drank himself to death, which is not accepted to be the case. Mr Dillon said he doesn’t write the headlines or sub-headlines, has nothing to do with the design of the page, but said he believes the term ‘boozing tragedy’ “conveys the anarchic, partying setting” in Germany.

Asked by Mr Clein if he believed the headline was true, he said that “it might be over-stating the reaction” in reference to the death sparking German Traveller riots. “In a literal reading it’s incorrect, yes,” he said.

Mr Dillon said he relied on local, confidential sources in Rathkeale, those on the ground in Cologne, and a number of newspaper articles from Germany which he found online, which detailed disturbances with Travellers in bars. According to his sources he said he believed that there were disturbances at the site, where hundreds of Travellers were staying and were asked to move on by the police on the day of his death. Mr Clein said the article and the headline “portrays a pantomine or circus or people behaving outrageously” and said it’s a “sensational, sexed-up article.”

The second paragraph states that Patrick Hegarty “died after the marathon boozing session,” but the deceased man’s widow said she had never seen her husband intoxicated. Judge O’Donohoe said there has to be objective evidence regarding the depth of damage caused to the plaintiffs’ reputation.