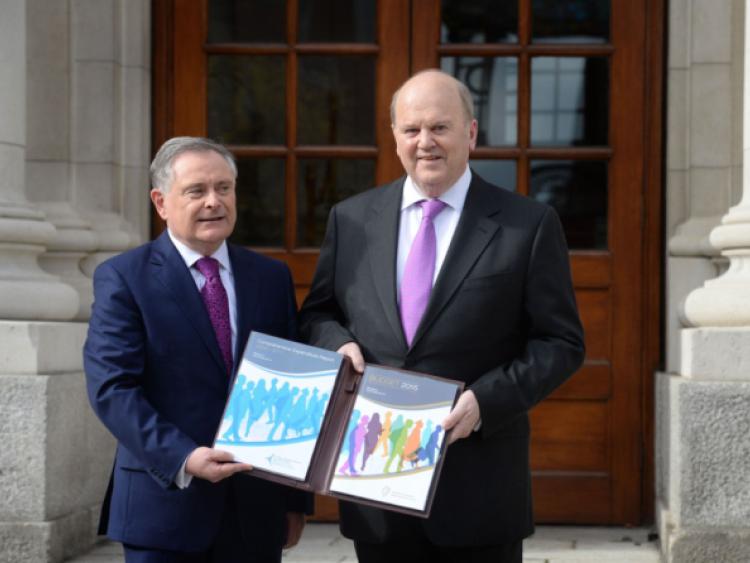 WILLIE O’Dea may have observed this week that Fianna Fail has no messiah but Michael Noonan’s latest Budget should have us all walking on water within a couple of years.

WILLIE O’Dea may have observed this week that Fianna Fail has no messiah but Michael Noonan’s latest Budget should have us all walking on water within a couple of years.

The Minister for Finance said he had allocated €6m to the Failte Ireland capital budget for the development of a footbridge that will link Shannon Rowing Club to Merchant’s Quay, part of a wider tourism investment linking the city’s three bridges with pedestrian walkways.

The bridge will follow the weir to the rear of the Hunt Museum and Sarsfield House and was a project that Failte Ireland was enthusiastically behind, according to the minister.

“I am providing €6m towards the cost of that. That wall there at the back of the Hunt Museum is keeping in millions of tonnes of water so the foundation is extraordinarily strong – and it is strong enough to take a pedestrian bridge on top of it. We have made provision for €6 million – €3 million in 2015 and €3 million in 2016.

“That will go through Failte Ireland’s capital fund. Failte Ireland think it is a very good project and it is either at the top or very near the top of the projects they want to fund,” the minister told the Leader.

More capital funding on the way to Limerick as a consequence of Budget 2015 will allow for the expansion of library facilities at the University of Limerick, the minister revealed.

“We have also made provision for €10 million for the library at UL. They are building a big extension to the library there and that will come out of the education capital fund and go a good distance towards it,” he said.

More generally, the average Limerick family could expect to benefit from what is likely to be the penultimate budget delivered by Minister Noonan and the first in which he has been able to give a little something back to a population reeling from years of austerity.

“There has been a very strong positive reaction to it, although people had I think got the message that we wouldn’t be increasing taxes or cutting expenditure. But they didn’t expect that we would have the number of significant announcements that we had and people are particularly pleased with targeting the tax relief on middle income people. If you take the typical couples around Limerick on €45,000 or €50,000, both working – that is worth €1200 to them,” he said.

Asked if he was happy to finally be able to ease up on the bad news, Minister Noonan said: “What is most gratifying is that the growing economy is entirely due to the policies we have followed and what pleases me most is that because we did what we did over the three years, that is now bearing fruit and we have the possibility of securing the recovery and getting more growth out of the economy and creating more jobs. We are moving into a very good place,” he said. And Minister Noonan rejected that the reliefs offered in the Budget were a conscious effort from Fine Gael to win back support from the middle classes ahead of a general election in 2016.

“There is no election for a good while yet and we weren’t emphasising a giveaway. What we want to do is secure the growth and create extra jobs and get the young emigrants back home and insofar as that accords with what people want a government to do, that would be our approach,” he said.

Speaking to the Leader from Leinster House, Minister Noonan was still suffering from the cough that caused so much commentary on social media while he was delivering his speech. He thought he had beaten it only to see it return on Budget day.

“I had a cough all week long. It went away on Monday but unfortunately came back on Tuesday morning. I was on an antibiotic but it didn’t clear up. It was one of those things,” he said.

There had been no last minute changes to Budget 2015, Minister Noonan said despite speculation that the presence of up to 100,000 people on the streets of Dublin protesting against water charges on Saturday had forced the government to offer relief.

“We signed off on the budget on Thursday and I finalised the speech on Friday. I came back to it again on Monday but all I did was polish it up a bit,” said the minister.