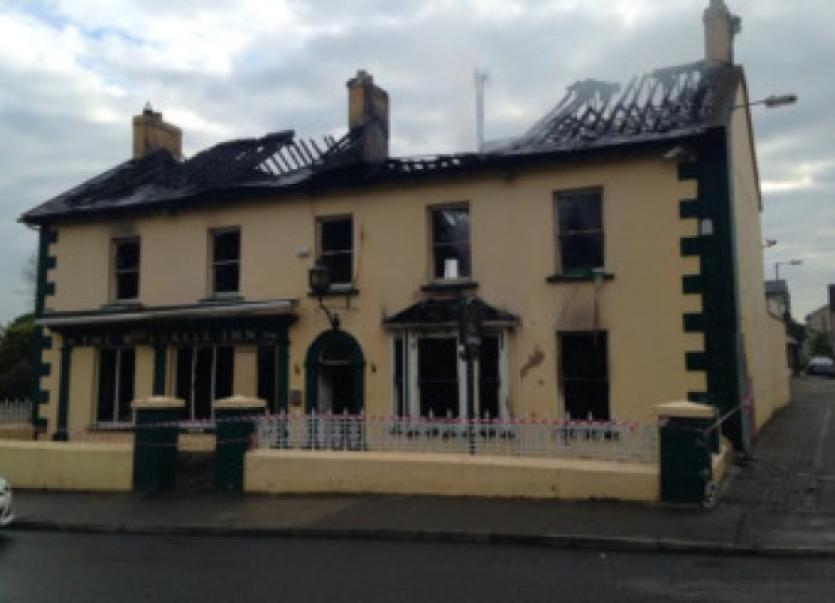 A DERELICT site notice went up this week outside a landmark County Limerick hostelry that welcomed customers for well over a century.

A DERELICT site notice went up this week outside a landmark County Limerick hostelry that welcomed customers for well over a century.

Little has happened since the The Worrall’s Inn on Castleconnell was gutted by fire at the end of May. The listed building has remained a blackened shell of its former glory and its prominent place casts a shadow on the rest of the picturesque village.

The incident occurred days after Cllr Shane Clifford was elected to Limerick City and County Council and in the next four and a half months it has become one of his biggest issues.

He confirmed this week that a derelict site notice has been issued and subsequent compulsory purchase order process started. “This follows several months of trying to get to the bottom of who owns it, who controls it or what is going on. I’ve been working with council officials first of all from a health and safety point of view.

“I’m getting a huge number of people living in the village coming to me who are very, very concerned about firstly the safety side and secondly the aesthetics of it and the damage it is doing to the village.

“I’ve been getting nowhere in terms of trying to find out who is actually responsible for the building.

“There are lots of rumours – is it with Nama, the banks, a receiver ... It has been frustrating so I went to the council,” said Cllr Clifford, who resides in the village.

Now that the derelict notice has been issued the county councillor hopes that they will get to the bottom of who controls the property.

“My understanding is if the site isn’t made safe they are given an instruction to bring it back to its previous state. If that isn’t done satisfactorily after you have given them an opportunity to do it the council will actually buy it. And because it is such an important feature of the village the council are concerned enough that they would step in and buy it.

“Hopefully that won’t come to pass and the people that are responsible for the project will restore it to its former glory,” said Cllr Clifford.

“It is about health and safety and the architectural heritage of the village. The people of Castleconnell are proud of their village and that is obvious from the huge amount of work done by the Tidy Towns and Castleconnell Project,” he adds.

The councillor is also concerned that the area could lose out on a big jobs boost from prospective buyers due to delays.

Pat Kearney, of Rooney Auctioneers, says they have an offer on the Worrall’s Inn.

“We are awaiting a decision on the offer. It would be great for Castleconnell if the offer could be accepted because this new owner would create employment for the village.

“It is a shame for the village - the Tidy Towns committee must be in despair to have this in the middle of the town,” said Mr Kearney.