New Limerick Mayor reflects on ‘chance of a lifetime’ 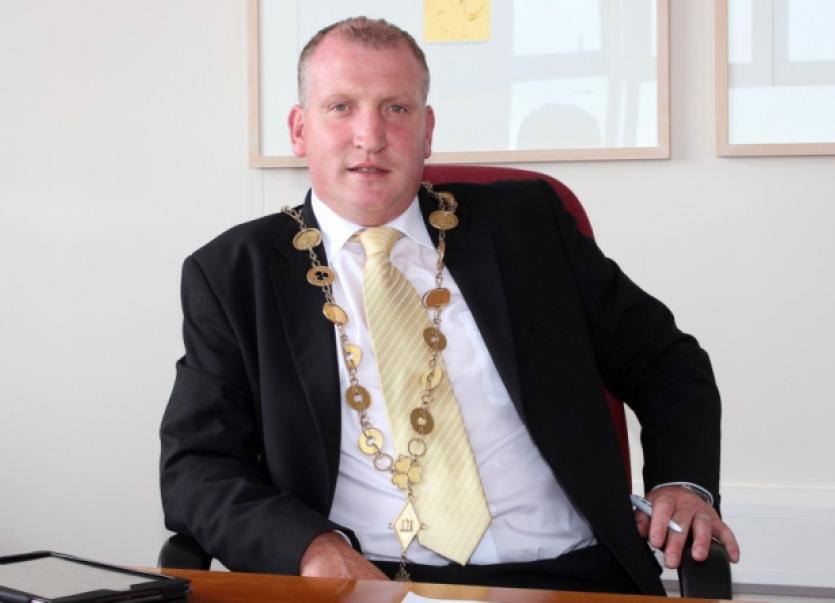 tHE newly-elected Mayor of Limerick City and County, Cllr Liam Galvin, sees plenty of his home county on his way in to work every day.

tHE newly-elected Mayor of Limerick City and County, Cllr Liam Galvin, sees plenty of his home county on his way in to work every day.

The Abbeyfeale councillor resides more than 60 kilometres away from City Hall, but has pledged to learn something new about the urban area each day he is in Limerick.

Three times elected as a Fine Gael councillor, Mayor Galvin has crammed a lot into the first 37 years of his life, including captaining Fr Casey’s to a senior county football title, getting married to Caitriona, and running a successful pub. But he says becoming the first elected mayor of both the city and county is “right up there with the best of them.

“It’s a great feeling, it is a great place to be and it is nice, when you are in politics, to have days like this. Because there are a lot of stressful days in politics. People might not realise that,” he said.

Born in 1976 to Jimmy and Betty, Cllr Galvin was one of eight children growing up on the family farm in the townland of Ballaugh – on the top of the hill outside Abbeyfeale. “We had some great times. When we used to cut the silage at home, the neighbours from both sides of the road would come and play soccer, football and rounders and various sports in our field. They were very good memories,” he says.

After attending school in what is now Colaiste Ide agus Iosef – “I was never a major fanatic of school,” he admits – Cllr Galvin went to Pallaskenry College.

After a period of working around the county, he moved back to Abbeyfeale, where he took a job with Kostal.

He highlights that firm for special praise – and he wants to see more companies setting up in rural Limerick.Without these, the mayor fears small communities will become unsustainable.

“Long ago, the family farm kept families together. Now families are bigger, and work is not on the farm, because there is more machinery, and less manpower required. So we have to create employment within our localities,” he says.

The genesis of Cllr Galvin’s political career can be traced to shortly after the year 2000, when he captained an unfancied Fr Casey’s football team to victory.

It was the first time in 63 years the club had secured this title, and he admits that he felt like “a bit of a celebrity” around the town.

His high profile led to an approach from Fine Gael’s national headquarters to run in the 2004 election, where he was one of three party men from the old Newcastle West area elected.

He was re-elected in 2009, and again in 2014, with an increased share of the vote, bucking the national trend.

During his political career, the councillor has also fulfilled a personal dream of running a pub – O’Sullivan’s Bar – which he managed for five years.

“It was something I always wanted to do. I went to the bank when I was 18 looking for a bit of money to do it. I won’t tell you what he told me! But thank God he said no. But it is something I got off my chest,” he said.

In 2011, Cllr Galvin went back to run the family farm after his dad Jimmy retired.

Although still living in Abbeyfeale town, he is to build a home in Ballaugh to be closer to his family.

Given Mayor Galvin’s increased vote share in the last election, and his elevation to the local authority’s top job, I ask him if he has any ambition for higher office.

Without hesitation, he says: “I would be very foolish to say no to you. But you can’t go through the door unless it is open. We have two great Dail TDs and while Pat [O’Donovan] and Dan [Neville] are in situ, I will not be considering running for the Dail.”

Something that will no doubt be an elephant in the room throughout the year is the fact that, for a second year, there are now two mayors in Limerick. Cllr Jerry O’Dea of Fianna Fail has the title of metropolitan mayor and Cllr Galvin concedes: “People are very confused. I think it is sad. Since I have been elected, people have been asking me why we have two mayors. It is very hard to explain it not alone to Irish people, but also foreign dignitaries who come.”

Much has been made of the fact Mayor Galvin’s home is closer to Co Kerry than Limerick city. Although he admits he does not know much about the city, he counters: “That’s like asking the city guys how much they know about the country life.”

But he insists the city is not new to him – gesturing northwards from his office on the top floor of City Hall towards the view of the Regional Maternity Hospital – where he was born - the Gaelic Grounds, where he won his county medal, and Thomond Park as a place he frequents often.

Away from work, Mayor Galvin enjoys a round of golf, but cycling is his real passion – a plan to take part in the Ring of Kerry event this year was put on hold due to his new work commitments.

Asked if we will see him cycling from Abbeyfeale to City Hall, he laughs and says: “Certainly not - that is a pedal too far!” Still though, the city can expect to see plenty of him for as long as he wears the mayoral chain with pride. “Every day I want to learn something new about the city. I have set aside 12 months for this. It’s a chance of a lifetime – and I am going to enjoy it.”