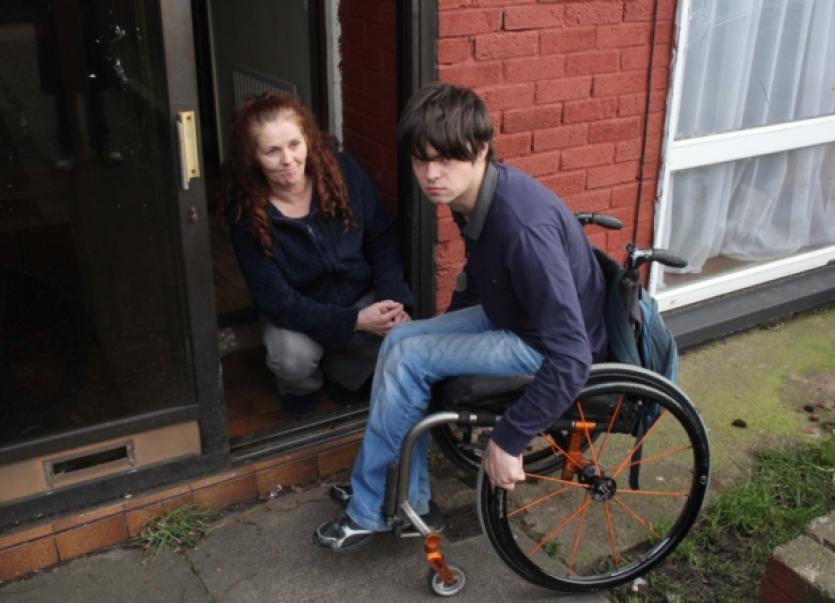 A WHEELCHAIR-bound teenager who says he has been waiting seven years for Limerick City and County Council to instal a ramp at his home in Thomondgate says he is “sick with stress” as he prepares to sit his Leaving Cert in June.

A WHEELCHAIR-bound teenager who says he has been waiting seven years for Limerick City and County Council to instal a ramp at his home in Thomondgate says he is “sick with stress” as he prepares to sit his Leaving Cert in June.

Shane Dundon, who has cerebral palsy, was honoured in the Limerick Garda Division Youth Awards before Christmas for his inspirational example in being fully involved in his school and community, including creating awareness around suicide and mental health.

Now Shane says he is feeling depressed himself and that it “boils my blood” that another arm of government is doing nothing to help himself or his family improve their living conditions.

The Dundon home in De Valera Park has steps leading up to the door, which itself is not wide enough for Shane to enter. He has to disassemble his wheelchair to get in and out, a procedure he says has caused him injury.

“I literally hate coming home because I know the minute I go home I have to take off the wheel. My chair has been destroyed. My rims are scratched and my side guards fell off when I was trying to get into the house.

“I fell on top of the chair and ended up hurting my ribs and having to stay out of school for a week. I could hardly breathe. My hands are covered in cuts from it as well. And I hurt my shoulder trying to get into the shower a while back as well,” he said.

Modifications to houses for the disabled are covered by council grants but Shane’s mum Teresa said they had been unsuccessful with an application in 2012 because her son was “not considered disabled enough”.

She said that when the family moved into the council house seven years ago, they had been promised a ramp for which they are still waiting. The council, she said, had received letters from therapists and doctors stressing the importance of improving Shane’s accommodation.

But Teresa said that repairs were no longer enough and that living conditions were such that they were seeking a transfer.

“We are very ill in the house. We are freezing, The dampness coming in the house is unreal. My kitchen is not fit for a dog. There is no insulation. The bathroom inside is all black mould. The pipes are still exposed from the last time they came out to fix it and pulled everything out. I’m starting to have an emotional breakdown myself and Shane is getting depressed. He is normally very strong and it’s shocking to see him down in himself,” said Teresa.

Asked how he was preparing for his exams, Shane said: “It’s hard because it is something that is always on my mind. It is not just something I can put aside. I am constantly worried about the health of my family at home and stress over falling myself as well.”

Limerick City and County Council said it could not comment on individual cases.