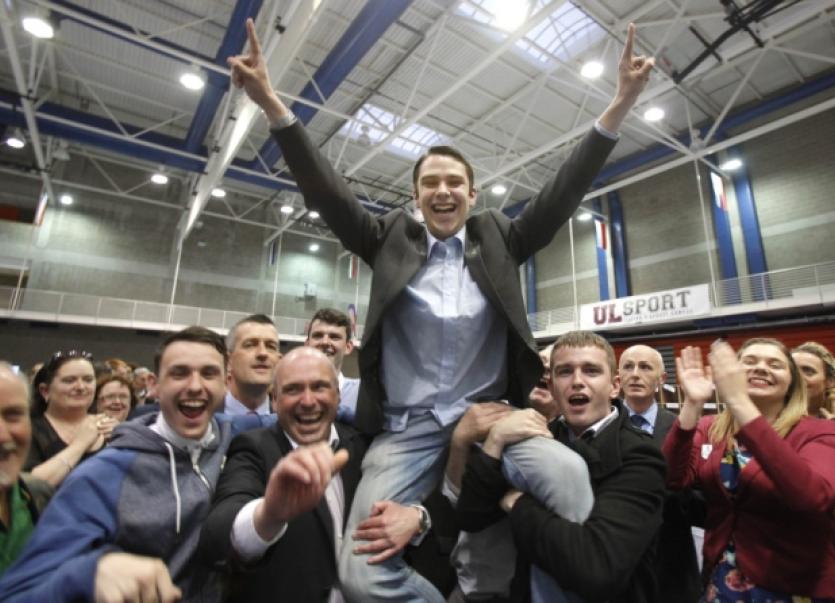 FOUR first-time candidates were elected in the Limerick city east electoral area as three outgoing councillors all lost their seats.

FOUR first-time candidates were elected in the Limerick city east electoral area as three outgoing councillors all lost their seats.

With 19 candidates contesting the eight seats, the count was always going to be a lengthy affair.

In keeping with that, the final declaration didn’t come until just before midnight on Sunday -following 15 counts and a full recount.

From early tallies it was clear that Sinn Fein’s Séighin O’Cellaigh was in line to top the poll and that he did with 1,703 first preference votes.

“I feel very grateful , I got such a great response talking to people at the doors and they came out and they voted for me in huge numbers,” said the poll-topper following his election late on Saturday night.

In somewhat of a surprise, Shane Clifford (FF) was also elected on the first count with 1,338 votes.

According to tallies, he received an overwhelming vote in his home village of Castleconnell as well as Ahane, Lisnagry and Montpelier.

The first time candidate, who is a son of former cathaoirleach John Clifford, said it is a time for change.

“The electorate have sent a very strong message that they want new blood in Fianna Fail. I think the time is right for the old guard to step aside and for new Fianna Fail to move forwards.”

It wasn’t until late on Sunday that long-time city councillor Kieran O’Hanlon secured his seat following the tenth count.

Cllr O’Hanlon, who has been a councillor for more than 20 years, will be one of the longest serving councillors on Limerick City and County Council when it meets for the first time next month.

While Cllr O’Hanlon retained his seat, a number of outgoing councillors suffered a different fate.

Paul Keller of the Anti-Austerity Alliance, who secured 498 transfers from his running mate Derrick Towell was elected following the twelfth count while Cllr Michael Sheahan (FG), Elena Secas (Lab), Marian Hurley (FG) and Jerry O’Dea(FF) were all elected, without reaching the quota, following the fifteenth and final count.

Cllr Sheahan said: “It is only right that Castleconnell should have more than one councillor representing it, it is nice to see that situation happening. I’m delighted to see the work I did in Castleconnell paid off.”

Elena Secas, who is the first non-national to be elected to a local authority in Limerick, said she was delighted. “I am just thrilled because I was very close last time (2009) and it was disappointing but I didn’t give up and I worked really hard and I am happy to see that all the hard work has paid off,” said the Moldovan national.

Two other new faces on Limerick City and County Council will be Fine Gael’s Marian Hurley and Jerry O’Dea of Fianna Fail.

“As a first-time candidate, I didn’t know what to expect. I think I ran a very positive campaign and I really applied myself so there wasn’t too much I left unturned,” said the well-known publican.