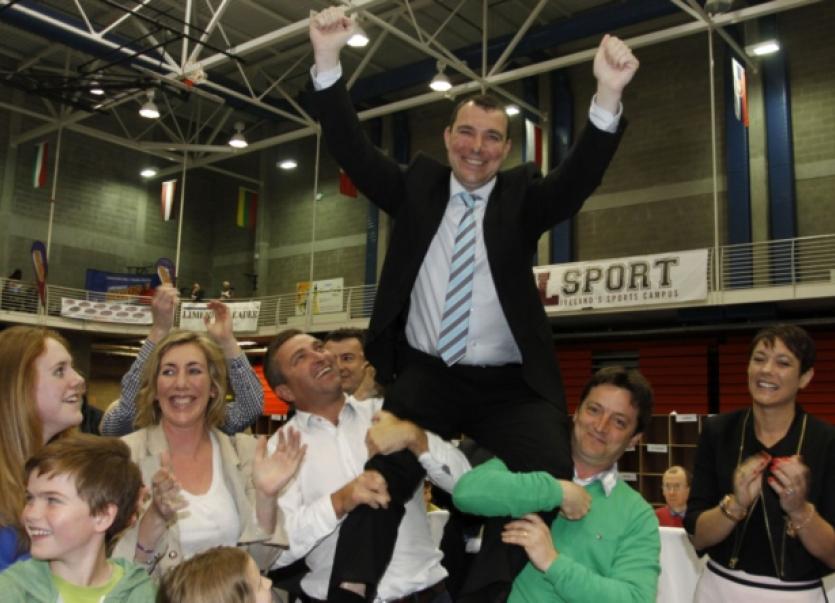 AFTER 10 years of being frozen out of plum positions, Fianna Fail are best-placed to take the top job in the city when councillors sit down to elect a mayor next week.

AFTER 10 years of being frozen out of plum positions, Fianna Fail are best-placed to take the top job in the city when councillors sit down to elect a mayor next week.

And the chances are it could be one of Cllr James Collins or Cllr Kieran O’Hanlon with the chain around his neck come June 6.

While breakthrough victories for Sinn Fein and the Anti-Austerity Alliance - at the expense of Fine Gael and Labour - attracted the headlines, Fianna Fail has quietly stolen in to become the biggest party in the city for the first time since 1999.

Six councillors have been returned for Fianna Fail, ahead of Fine Gael (five); Labour, Sinn Fein and the Anti-Austerity Alliance (all three) and the sole Independent left in the city, Cllr John Gilligan.

These 21 councillors of the Limerick Metropolitan Area will elect a mayor, a role that will be subordinate to the cathaoirleach of Limerick City and County Council.

The latter post will also be elected from the 40 councillors who make up the amalgamated local authority at its inaugural meeting at the University of Limerick next week.

“The arithmetic points to a deal between ourselves and Fine Gael - both to elect a cathaoirleach and to elect a mayor. But it also makes more sense at a political level because I think neither ourselves or Fine Gael is a good fit with the new councillors who have done very well but who Michael McDowell once described as the left, the hard left and the leftovers,” was how one Fianna Fail official described it this week.

“James Collins as mayor would be very symbolic in terms of the coming together of the councils as he is still technically a county councillor. On the other hand, there could be a symbolism in somebody like Kieran O’Hanlon as well if the city councillors are anxious about losing status in the old borough.”

Fine Gael, meanwhile, have gone from eight “city” councillors down to five - and this in a greatly enlarged urban area. And only two - Cllr Michael Hourigan and Cllr Maria Byrne - of these are based in the former city areas.

And with Rose Brennan having lost out to Sinn Fein’s Ciara McMahon for the last seat in Adare-Rathkeale on Monday evening, Fine Gael have taken 12 seats on the overall council, with Fianna Fail on 13 and holding the whip hand in electing a cathaoirleach as well.

Of any possible negotiations with their traditional rivals, Cllr Hourigan said

“it would have to be on the basis of a level playing field”, when it came to dividing up positions.

He stressed, however, that Fine Gael hadn’t even scheduled a meeting on what to do next. Yet he gave a clear indication that Fine Gael’s patience with Labour had run out after, he claimed, Labour had welched on previous deals.

And an alliance between Fine Gael and parties further to the left were also unlikely.

“Any group which would support a strong council, I would do business with. I won’t rule out any group. But we have learned lessons before that when difficult decisions have to be made, if someone pulls back, you are in real trouble,” said Cllr Hourigan.

On the Fianna Fail side, Cllr Collins and Cllr Joe Crowley both stressed that “stability” on the council would be important in the coming years.

The Anti-Austerity Alliance have ruled out entering any pacts with Fianna Fail, Fine Gael or Labour.

That would mean the only other way for Fianna Fail or Fine Gael to elect a mayor would be through an unlikely alliance with both Labour and Sinn Fein.

There is nothing in theory to prevent different alliances electing a cathaoirleach and a mayor but sources in Fianna Fail said this would be too difficult to manage politically speaking.

The party is quietly confident they can elect one of Collins or O’Hanlon as mayor next week and possibly Noel Gleeson as cathaoirleach of Limerick City and County Council.