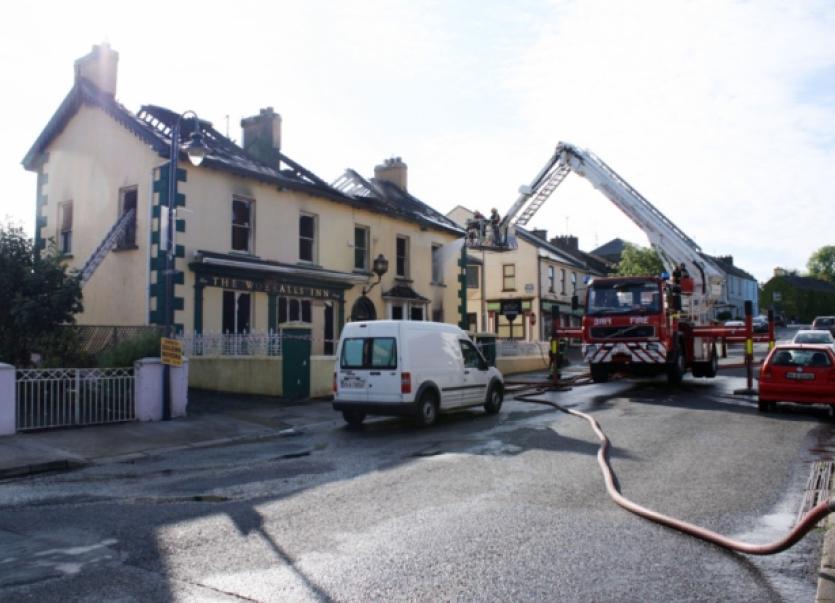 GARDA investigations are continuing into a fire at a landmark listed building in the heart of Castleconnell village.

GARDA investigations are continuing into a fire at a landmark listed building in the heart of Castleconnell village.

It is too early to say if the blaze in the vacant Worrall’s Inn, which started in the early hours of Tuesday morning, was malicious.

“The scene hasn’t been fully examined yet, the way the building is at the moment it is a dangerous structure,” said a garda spokesperson this Wednesday.

They are waiting for the technical and forensic inspection to take place which they hope will happen in the coming days.

“The investigation is ongoing. We are appealing for any information - if anybody witnessed anything suspicious in the area between 1am and 4am please contact gardai,” said the spokesperson.

Three units of Limerick City Fire Service and one from Cappamore rushed to the scene after the alarm was raised at 3.37am.

They battled the fire for hours, returning to base at 7.13am.

John Hardiman, who lives in the village and is on the Tidy Towns committee, said he was “absolutely sickened” when he saw the damage.

“It was just gut wrenching, we put our application form in last week and then for one of our landmark buildings in the heart of the village to be gutted...

“When it is boarded up as invariably happens it is just going to be terrible because like all rural villages it is struggling commercially and to have something like that in the middle of it, it will look like the rest of the place is closed down,” said Mr Hardiman.

But while the beautiful building has been destroyed he says the reality is no-one was hurt.

“We have to look at it like that, there wasn’t anyone harmed and we have to move on,” said Mr Hardiman.

It was built circa the 1820s and Mr Hardiman said it was very popular in days gone by when people came “to take the water”.

Local historian, Paddy Tuohy, said it was a hotel during the high water days of the river Shannon more than 100 years ago.

“It was before the Shannon scheme at a time when salmon were plentiful and the fishing rod and salmon fisheries were big industries. There were many prominent owners down through the years. It is part of our streetscape in Castleconnell and I am very sad about it,” said Mr Tuohy, who was out walking on Tuesday morning and saw Worrall’s Inn at 6.45am.

“It was a blackened mess,” said Mr Tuohy. He says the name comes from a Joseph Worrall who opened up an inn at what is now the World’s End. The ex-British Army officer settled in Castleconnell. That inn was demolished after the trading post went quiet once the old canal was built into Limerick via Clonlara and Gillogue. But his name continues in Worrall’s Inn.

Newly elected councillor, Shane Clifford, who lives in the village, said it was very sad to see part of the architectural heritage of the village destroyed.

“We were working towards getting a landmark business to move in and take over the building to breathe new life into the village,” he said.