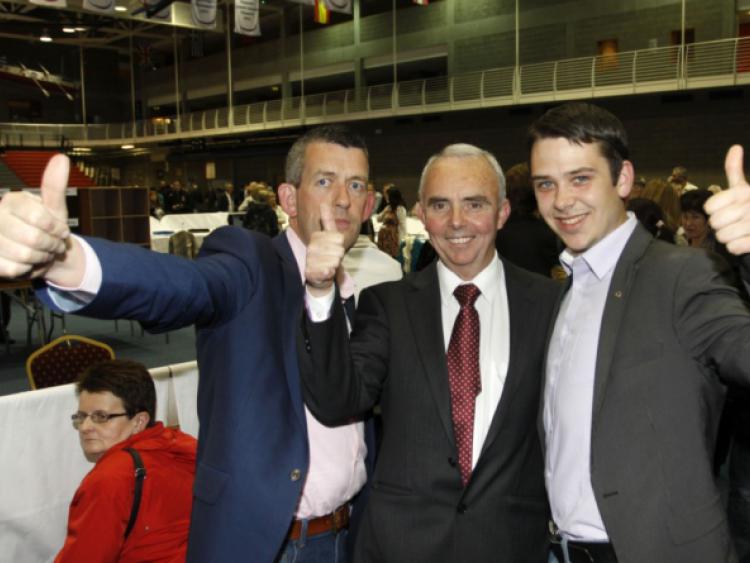 WHILE the breakthrough of Sinn Fein and the Anti-Austerity Alliance has grabbed most of the attention this week, it looks like being the traditional forces of Fianna Fail and Fine Gael who will combine to elect the Mayor of Limerick in the coming days.

WHILE the breakthrough of Sinn Fein and the Anti-Austerity Alliance has grabbed most of the attention this week, it looks like being the traditional forces of Fianna Fail and Fine Gael who will combine to elect the Mayor of Limerick in the coming days.

Albeit with a lesser share of the vote than their traditional rivals, Fianna Fail are the biggest party in Limerick - for the first time since 1999 - in terms of council seats.

It is likely to be on June 16 when the 21 members of the Limerick Metropolitan District will elect a mayor. Of them, there are six Fianna Fail councillors, five Fine Gael, three Labour, three Sinn Fein, three Anti-Austerity Alliance and one Independent with John Gilligan the last man standing.

That leaves Fianna Fail and Fine Gael with a majority of one should they, as expected, forget about the Civil War and reach an accommodation. And a decidedly left-looking opposition should provide for plenty of healthy debate over the next five years.

Deputy Niall Collins said it was shrewd selection of candidates that had won the day for Fianna Fail: “It has been a very positive election for us. We have increased our seats by three from 10 out of 45 (on the combined councils) to 13 out of 40 (on the single authority), which is a very good showing. We are particularly pleased with our performance in Limerick city, where we have gone from one city councillor to six in the new, albeit enlarged, metropolitan district.

“You have the headline of Sinn Fein taking seats in most areas, which is fine and well done to them, but I think the real story in the election when the cold analysis is done will be the recovery of Fianna Fail which has come through in terms of an increased seat take,” he added.

While unseated Fine Gael councillors Diarmuid Scully and Jim Long, both former mayors, rued an electoral strategy which they felt crowded their areas with two many candidates, Cllr James Collins, the Fianna Fail poll-topper in Limerick City West, said his party’s strategy had paid off in terms of seats won.

“We worked hard to put our candidates in place and to select where they were located geographically, some new candidates and some experienced candidates. I think it is a vindication of the work we have put in,” he said.

While Cllr Collins might have headed the poll in City West, it was Sinn Fein - by a country mile - who were first past the post in Limerick City North (Maurice Quinlivan) and Limerick City East (Seighin O Ceallaigh).

Cllr Quinlivan won more first preferences than all 14 other candidates combined in Moyross and Ballynanty and St Mary’s Park.

But it is his performance in the more middle class areas that will have the two largest parties anxiously looking over their shoulders. Areas like Caherdavin and Corbally that had backed O’Dea and then Noonan in the last two general elections were turned a Sinn Fein shade of green as voters backed the party in unprecedented numbers.

Cllr O Ceallaigh, all of 22 years old, was the best supported candidate in Southill and Janesboro by some distance but also topped the poll in Singland and ran Cllr Kieran O’Hanlon (Fianna Fail) in Garryowen.

He was beaten into fourth place by the Fine Gael and Labour candidates in Monaleen but still took almost 150 number ones here.

“This is a fantastic result for us and it sets us up for a Dail seat,” said Cllr Quinlivan.

“I was actually amazed on the canvass that elderly people who told me they were voting Fine Gael all their lives and were really disappointed with the government attacking them on the medical card issue, property tax and water tax. A lot of Fine Gael voters who are not ready to come to us yet have just not voted - and I think that is what we are seeing in this election as well. But they are ripe to come to us in the next couple of years and I think we will elect a TD in the next election,” said Cllr Quinlivan.

Disaffection over water and property taxes has also helped deliver three seats for the Anti-Austerity Alliance, despite their campaign being funded largely from donations from the public.

And Cllr Cian Prendiville is determined the breakthrough will be no flash in the pan.

“The austerity parties, Labour, Fine Gael and Fianna Fail, have been told now that people have had enough. If they heed that warning and change course and shift the burden from ordinary people on to the super-rich, that’s one thing. But I don’t think they will do it. I think they will again side with the bankers and the billionaires and in that case yes we will have to organise the opposition in the council chamber and on the streets,” he said.

Support for the AAA came mostly from inner city communities but they had also picked up hundred of votes in Caherdavin, Corbally, Raheen, Dooradoyle and Monaleen.

Fine Gael’s Cllr Daniel Butler, meanwhile, said that the emergence of a strong left-wing bloc in the city was “ a healthy thing overall”.

“We have the emergence of new parties here today with the Anti-Austerity Alliance and Sinn Fein doing very well. It is going to bring a left element into the council and I think that is to be welcomed. It will bring about a more challenging and more open environment.

But he also laid down a challenge for the new councillors.

“They have done a lot of talking up until now so now is the time to see how they perform and for them to show us how they intend to bring Limerick forward because there is a big challenge ahead in terms of the amalgamation. There is a lot of work to be done and you need to learn how to work with officials on the council. I look forward to seeing how they approach it.”

Overall, the political scene in the city has been transformed. Willie O’Dea, Michael Noonan and Jan O’Sullivan don’t have many more elections left between them and Maurice Quinlivan and James Collins have emerged from this campaign as major forces in city politics.

After an energetic campaign, Joe Leddin has come through a difficult election for Labour with flying colours and is best-placed to be the party’s standard-bearer in the years to come.

And with huge corrections in the public finances in the budgets ahead, there has never been a better time to be an anti-austerity candidate.

Who knows what surprises the electorate may spring come the general election in 2016?