Raising the flag for health in Newcastle West 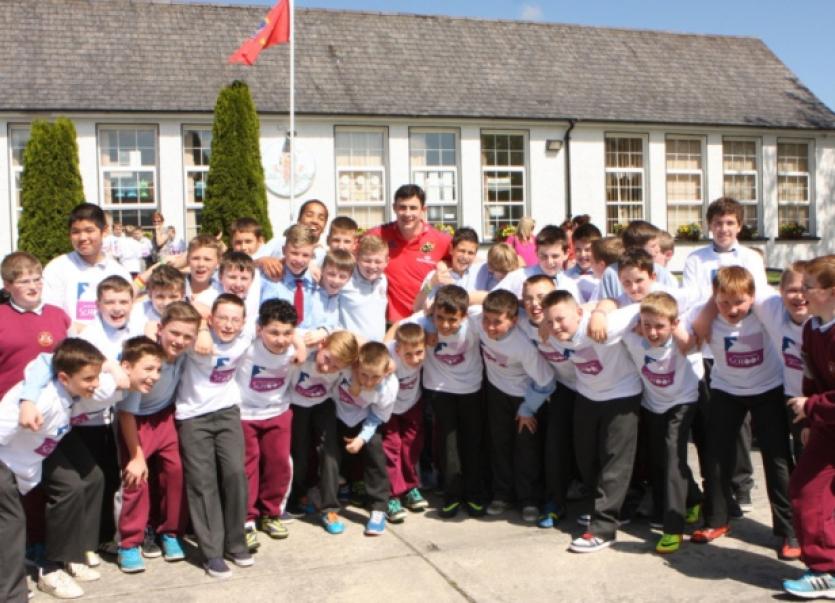 THE boys of the Courtenay national school in Newcastle West stole a march on other schools in the mid-west this Wednesday when they ran up the first flag to be awarded under the HSE’s healthy schools initiative.

THE boys of the Courtenay national school in Newcastle West stole a march on other schools in the mid-west this Wednesday when they ran up the first flag to be awarded under the HSE’s healthy schools initiative.

And Munster’s full-back Felix Jones was there to help them celebrate this milestone which was almost four years in the making.

Perhaps more importantly, he took time out to encourage the boys to take their health seriously and to show respect in their dealings with others.

And, in broad strokes which reflected the main themes of the healthy schools’ initiative, he urged the boys to be considerate and caring with others and, most importantly, to know when to draw the line about teasing and having fun.

He also stressed the benefit of support. “It’s important to be part of a team,” he told them. “You will have good days and bad days but we all support each other, we all help each other.”

His message re-enforced the lessons learnt through the healthy schools initiative which deals with bullying, healthy eating, relationships and emotional intelligence.

The school was delighted to be asked to join the healthy schools network, Máiréad Carr, the teacher who headed up the working committee for the project in the Courtenay Boys.

Parents, teachers and pupils, as well as a representative from the HSE, were part of the committee which guided the school through the different stages of the programme.

The healthy eating module was particularly successful and culminated in an open day, attended by parents, where the boys prepared and displayed a range of healthy lunch options, Ms Carr explained.

A significant part of the programme also focused on emotional health. The approach varied, depending on the age of the boys, but the aim was to help children to recognise, name and talk about their emotions, Ms Carr continued. Older children, for example, compiled emotion journals and colour-coded their feelings.

Because, in general, boys are more reluctant to talk about feelings, this was an important development and also gave the Courtenay boys an important tool for their future, Ms Carr said.

It took several years to work through the full programme, she added, and it was integrated with the social, personal and health education module that is part of the normal  curriculum.

Pupils, past pupils, parents, members of the board of management all gathered in the sunshine to raise the flag. But it was Felix Jones who was the real centre of attention, happily posing for photographs with the boys, signing autographs and visiting each of the classes in turn.