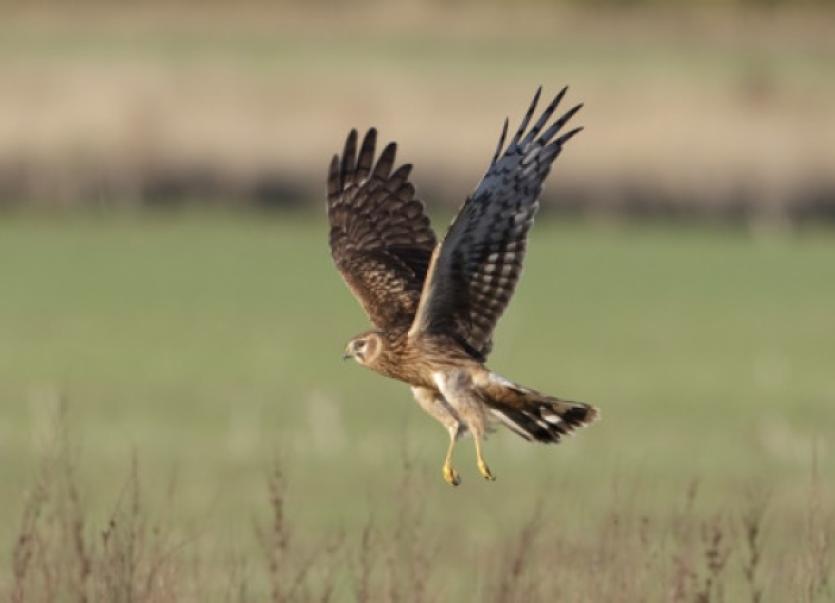 LIMERICK farmers have been left on a wing and without a prayer over land specially designated for hen harriers.

LIMERICK farmers have been left on a wing and without a prayer over land specially designated for hen harriers.

Extra chairs had to be put out for the crowd of over 250 who attended a public meeting called by Limerick IFA to address the hen harrier issue last week.

Representatives of the National Parks and Wildlife Service (NPWS), Department of Agriculture and forestry service were all at the Charleville Park Hotel.

Limerick IFA chairman, Aidan Gleeson, said Limerick farmers who have had their land designated as special areas of protection (SPAs) are between a “rock and a hard place”.

Thousands of acres of Limerick land mainly in the west - Tournafulla, Mountcollins, Athea and more - have been designated.

“As it stands their land is worthless, they can’t do anything with it. One man stood up and said if he got sick in the morning and his family were to realise the value of their asset they wouldn’t get a bid,” said Mr Gleeson.

The meeting heard that hen harriers declined in the 1800s before reemerging in the 1950s and 1960s. They did very well before declining again in the 1980s. In the late 1990s and early 2000s steps were taken to put these SPAs in place.

“The farmers in the mountainous areas with marginal land were promised if they were designated there would be compensation for the restrictions put on their method of farming.

Farmers in West Limerick, who have had their land designated, have seen all their hard work disappear because they can’t touch it.

“When it was in good agricultural condition the value would have been about €6,000 an acre. The restrictions means their land has gone backwards and now they have scrubby moorland which isn’t fit for more than forestry. It is worth €4,000 an acre for forestry.

“The rub is they can’t plant forestry because they are restricted - it is dead land. If they want to sell it in the morning they would get no bid for it, Guys who wanted to sell it have got no bid for it because it is not any good for agricultural land and forestry isn’t allowed. The land is worthless,” said Mr Gleeson.

To make matters worse they are being penalised under the single farm payment because the land is not suitable for forage and if they clear the scrub they will get a penalty under cross compliance.

“They were promised when designation came in they would be compensated - €350 a hectare a year. A certain number of people got in to it for a short period of time, others applied but never got in - the vast majority never got any compensation,” said Mr Gleeson.

“The NPWS stated it is upto the Department of Agriculture to compensate farmers. The department stated they were not in the business of compensating people for designation so the responsibility for this is being shoved from Billy to Jack. The NPWS said they are looking at it at the moment and they will be back in 12 months. We are saying back in 12 months isn’t satisfactory. We need a speedy answer to this. It is not a complicated issue - farmers were promised compensation for designation,” he said.