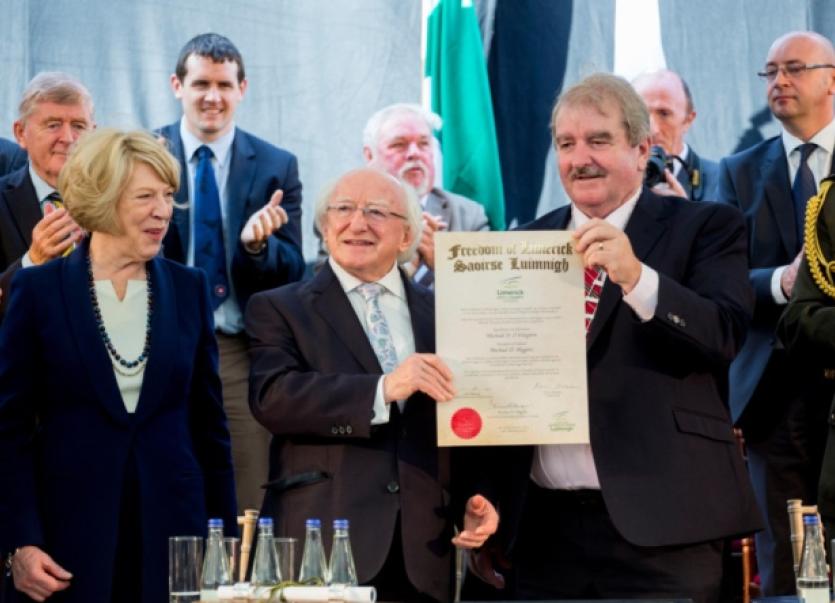 CHAIRMAN of Limerick City and County Council, Cllr Kevin Sheahan, has appealed to world leaders to make a stand against the execution of Christians in Iraq.

CHAIRMAN of Limerick City and County Council, Cllr Kevin Sheahan, has appealed to world leaders to make a stand against the execution of Christians in Iraq.

And while he did not mention Islamic State by name, Cllr Sheahan referred to the human rights abuses perpetrated on the Chaldean Christian community in northern Iraq by that terrorist organisation.

He was speaking at the ceremony to confer the freedom of Limerick upon President Michael D Higgins, whose career as a champion of human rights Cllr Sheahan said was rightly being celebrated.

The ceremony was attended by close to 1,000 people at the Milk Market on Monday.

Cllr Sheahan, who last year denied that his controversial comments in the council chamber demanding an “Irish-first” housing policy were racist, said that no effort should be spared in taking a stand “against dark forces that punish innocent people”.

Addressing the president, the long-serving Fianna Fail councillor said: “during your time as a politician and throughout your life as a human rights advocate, you have given a voice to those who have faced injustice or who have been caught in the crossfire of various conflicts throughout the world”.

“Speaking for myself, I passionately believe that Ireland and the world need more voices like yours today as war and suffering continues from Iraq and Syria to the Ukraine to Gaza and Israel.

“The oppression of innocence was wrong during your activist days and it remains wrong today.

“On a purely personal note, I wish to say I have very strong feelings about the barbaric treatment being handed out to the Chaldean Christians residing in northern Iraq.

“In village squares, multiple crucifixions of these people are a sad but common event. The beheading of young boys of this faith is far too prevalent. The Chaldean Christians were converted to Christianity by some of the apostles and they are the last people on earth to speak Aramaic, the same language spoken by Jesus Christ.

“Governments and religious leaders of all denominations need to take a stand against the dark forces that punish innocent people for personal gain. I hope they are able to find the courage and the moral compass that has guided you throughout your career,” said Cllr Sheahan.

In response, President Higgins said he had been struck by Cllr Sheahan laying such an emphasis on human rights.

“You are correct to remind us that, even as we speak on a joyful occasion, that there are those people who carry that legacy of the Aramaic language who are under oppression,” said President Higgins.

“And so are so many others. We have never had so many people who are being pushed from their homes in conditions of conflict or across borders than we have at present and they should always be in our thoughts.”