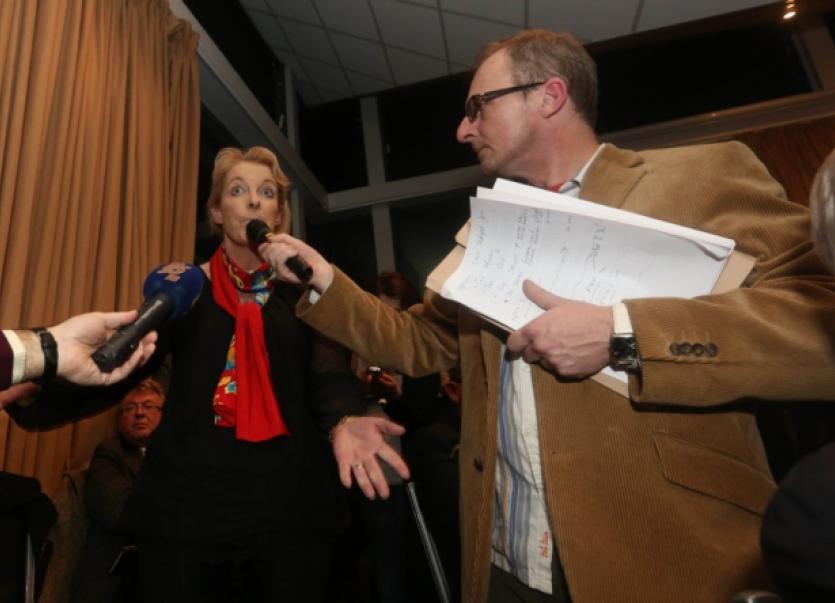 THE man who organised the stormy Limerick City of Culture meeting that ultimately triggered the resignation yesterday of the project’s CEO Patricia Ryan insists he had no prior knowledge of her decision to quit, despite claiming on Facebook that ‘breaking news’ was imminent - before Ms Ryan had even informed her board.

THE man who organised the stormy Limerick City of Culture meeting that ultimately triggered the resignation yesterday of the project’s CEO Patricia Ryan insists he had no prior knowledge of her decision to quit, despite claiming on Facebook that ‘breaking news’ was imminent - before Ms Ryan had even informed her board.

The Limerick Leader can confirm that Ms Ryan spoke to gardai in Limerick this morning about her fears that her phone was hacked yesterday, some time before she confirmed the news of her resignation.

It is understood that she is currently considering whether to make an official complaint about the matter.

By early yesterday afternoon, Ms Ryan had informed only three people very close to her of her intention to resign. It is believed she was shocked by an online claim billed as ‘breaking news’ about her intentions.

The Facebook post by Richie Ryan, who runs the CentreStage Theatre School in Limerick and who chaired Friday’s public meeting, read: “It is quite OBVIOUS that CEO Limerick City of Culture CEO Ms. Patricia Ryan has decided to ........Wait for it ... BREAKING news here in ONE HOUR ... Watch this page for the exclusive update!”

However, speaking to the Leader today, Mr Ryan emphatically denied that he knew about Ms Ryan’s intention to resign, before it was confirmed on Twitter by this writer at 3.41pm yesterday.

Mr Ryan said: “The reality of the situation is that I did not know, I spoke to nobody and as far as I am concerned, the post that I put up on the social media with regard to what I considered to be breaking news, was that I believed there was breaking news coming very quickly down the track. Based on my reading of the situation.

“That is the absolute, honest truth. I had no conversation with anybody. You can quote me on that and if anybody wants to challenge me, legally or whatever, I’ll tell you I’m very prepared to stand up and put my hand on the bible and say that I spoke with absolutely nobody and I was going on my reading of the situation. I believe that it was imminent that Patricia Ryan would find herself where she had to, unfortunately, resign.”

Mr Ryan continued: “For me, that comment on social media was an intelligent ... I could use the word ‘guess’. Because with all due respect, and I would make it very clear, that at that point I had the feeling on Sunday that she was going to go. And basically, I put up the piece on Facebook to say, ‘Keep an eye here. There is going to be some news coming up soon.’ And I put an hour to keep people active.”

When it was suggested to Mr Ryan that the Facebook post was written in a way that suggested he was aware that the resignation was imminent, he responded: “I wasn’t. Absolutely not. I believed that she was going to resign very quickly. Based on my gut. It was legitimate for me to put up on social media that I believed there was going to be news coming down the line soon. Based on my reading of the situation. Based on all the publicity - national - and the controversy around Patricia in particular, I absolutely felt there was going to be an announcement yesterday. And I was proven right.”

Asked how he could have put a time frame of one hour on the expected announcement, he said: “Let me explain that to you. The reason for the one hour was to keep interest in the topic, I was trying to keep people interested.”

Despite her resignation having been accepted by the City of Culture board, Ms Ryan was back at her desk this morning in Culture House in the city. She is expected to remain in place until a new management structure is confirmed.

In a statement released on behalf of the board of City of Culture, it said: “We are grateful that, at our request, Patricia has agreed to work with the board to ensure a smooth transition and continuity.”