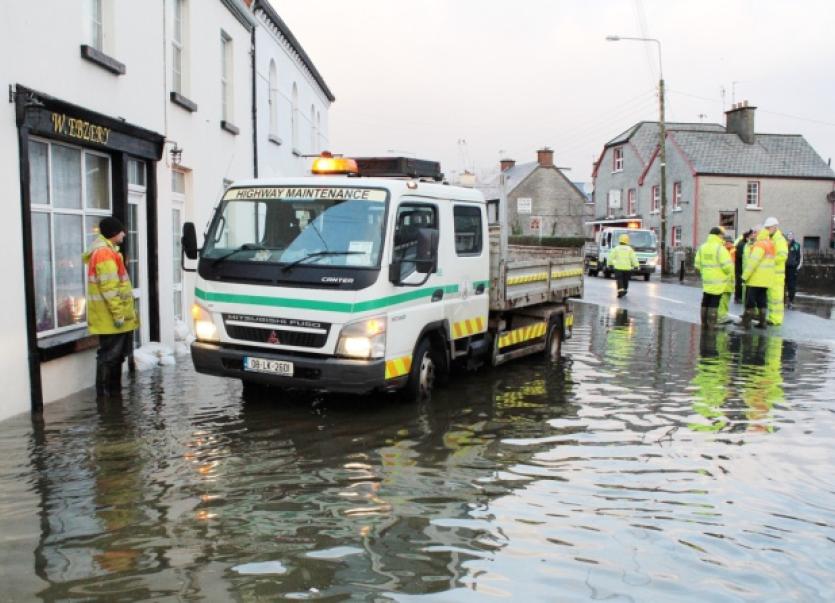 A QUIET fury is growing in Foynes where residents and business people are, once again, picking up the pieces after a flood and counting the cost.

A QUIET fury is growing in Foynes where residents and business people are, once again, picking up the pieces after a flood and counting the cost.

But there is also grave concern that further high tides, expected around February 1, will result in a recurrence of last Friday’s destruction.

The real bone of contention, however, is that a flood defence wall, built just eight or nine years ago, was unable to protect their homes and business premises. And many felt that an old earthern bank, built in the 1800s but removed in the 1960s, would have prevented the impact of Europe’s worst sea storms in half a century. That bank, according to publican John McMahon and many others, had kept the high water from coming across the railway line for many years.

But nobody, neither the Shannon Foynes Port Company, nor CIE nor the Bord of Works wanted to take responsibility for flood defences in Foynes, according to Mr McMahon.

“The flood defences didn’t work and why didn’t they?,” Cathy Hanlon, owner of the Foynes Inn said. “They were put in place years ago but they haven’t worked. They should have worked.”

Last Friday morning’s high tides, driven on by high winds, smashed a forty-foot gap in the defence wall which is a four-foot high wall running between the old railway track and the harbour area to the rear of the main street and running parallel to it. Water came gushing through this breach shortly before 7.30am, flooding almost 40 bars, shops and homes, turning the main street into a temporary river and flooding the community centre car park and grounds.

The affected buildings were clustered in the centre of the long main street and the worst affected were those on the river side.

Now residents want to know, when the breach in the wall will be repaired. “There will be a repetition of Friday if the breach isn’t repaired,” John McMahon warned. However, another local who did not want his name used, said: “The water did not top the wall. It broke the wall. The issue is not the height, it’s the quality of the wall that was built.”

A spokesman for Shannon Foynes Port company pointed out that it was not the statutory body responsible for flood defence and response but had been happy in the past to assist the bodies responsible i.e. the OPW and Limerick City and County Councils. He also pointed out it had invested in the building of the flood defence wall ( now breached), although it was not obliged to do so and had also made a boon available to the council last week.

However, he continued: “We are fully aware of the enormous hardship on residents and businesses in Foynes following the record floods which saw high tides swell from a previous record of 6.2m to 6.8m.”

The company has begun repairing and re-inforcing the broken defence wall, the spokesman said and would extend flood defences to other areas of the port “where necessary as part of this interim solution.”

“We will also be meeting with the OPW later this week as part of the review of the floods to support their and the local authority’s efforts to avoid any such floods in the short term. In the meantime, the OPW, which is the lead agency for flood risk management in Ireland, is carrying out a Catchment Flood Risk Assessment and Management Study for the River Shannon, including the Estuary, which will scope out flood risks and flood solutions and we will happily play our role in that process,” he told the Limerick Leader.

Meanwhile, Pat O’Neill, senior engineer with Limerick County Council said that some 100 people had been involved in the clean-up. “It was very, very traumatic for a lot of people, but we worked together with the gardai, the fire service and the HSE and we were able to deal with every situation,”  he added.

Eugene McSweeny, chairman of Foynes Community Council said they planned to convene a meeting shortly to discuss the matter while MEP Sean Kelly has asked for the storm damage in Ireland to be debated in the European Parliament next week. He has also called on fellow MEPs to support the call for EU Stability Fund money to be made available to Ireland.

At least eight houses along the quays in Askeaton also experienced flooding on Friday and the pool and leisure complex in the town was closed for a number of days to repair boilers.

Large areas of agricultural land in Ballysteen were also flooded and Fine Gael council candidate Tom Neville has called for a risk management plan to be drawn up for Foynes, Askeaton and Ballysteen. “We need to put an action plan in place. This was a tidal flood. We can’t control the weather but we can control our readiness and  response.”