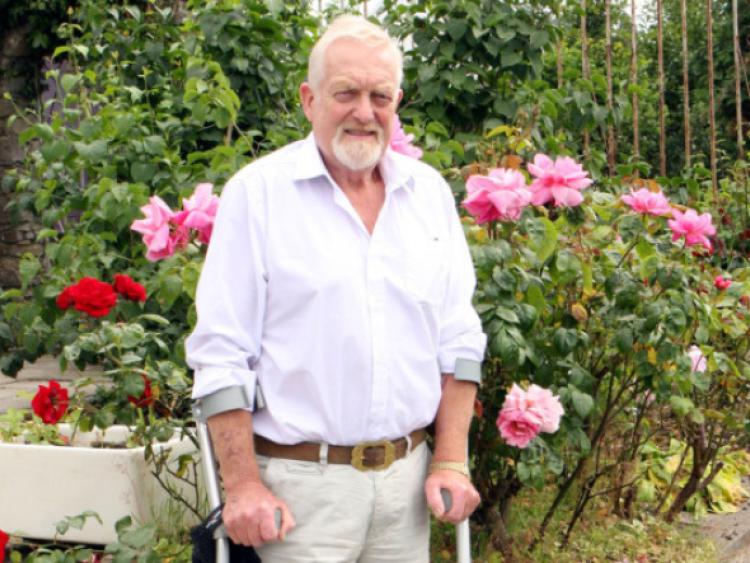 A 73-YEAR-OLD Pallasgreen man says the last two years of his life have been hell due to the “botched” health care he received in County Limerick.

A 73-YEAR-OLD Pallasgreen man says the last two years of his life have been hell due to the “botched” health care he received in County Limerick.

Mike Condon underwent a routine hip operation in Croom Orthopaedic Hospital on February 28, 2013. He subsequently spent a total of 247 days in University Hospital Limerick over the next year. Mike had four hip replacement operations and three times it had to put back in after he contracted MRSA.

When he should be enjoying his retirement after working hard all his life, Mike will be confined to using crutches for the rest of his life. He has MRSA; lost 25 per cent of the use of his kidneys; has to take antibiotics and painkillers every day and can’t go out in the sun.

Mike isn’t even sure he needed the hip operation in the first place but he went along with the medical advice.

“I had the operation in Croom. On the second or third day after it I wanted to go to the toilet so they just closed the door and left me there. I blacked out, collapsed, fell off the toilet and the hip came out.

“I must have been 15 minutes on the floor trying to call somebody to come in to help me. They should have done blood tests after the operation which they didn’t do. It was shown that my blood count was low and I was getting anaemic.

“I was left for 24 hours because it was the weekend and they couldn’t find a surgeon to put my hip back into place. I had to wait. They propped me up with a load of painkillers and put the hip back on Monday. They transferred me to the Regional because my kidneys went due to the trauma and the huge medication I had been on,” said Mike.

The well known Limerickman was a founder member of Bruff RFC and their first hooker.

“My leg was huge and I have seen fellows with big legs playing rugby but my right leg was so big it would make them all look small. I was fasting two whole days waiting to go down to theatre for my hip to be done. The next thing they would come up at 9am and say, ‘We have priorities, we can’t take you down now, it will be tomorrow morning’,” said Mike. After three or four days the leg burst open in the bed.

“The infection was unbelievable. That was the MRSA. They took me down to theatre then,” he said.

Originally he was placed in a semi-private ward with five/six people but then he was put in isolation.

“I should have been in isolation from day one but they didn’t detect that I had MRSA which was wrong again on the hospital because they never treated me or looked for the cause of it,” said Mike, who to this day doesn’t know if he contracted MRSA in Croom or UHL. What he does know is this period of his life will affect him for ever.

The hip had to be taken out because the infection had spread to the bone. A steel pin was put in to the leg for a couple of months to see if the infection could be cured. Mike lost count of the number of blood transfusions he got.

Since being admitted in March he spent a total of 247 days in UHL.

“I was in and out like a yo-yo. Last December I went in with pneumonia and a collapsed lung. The previous September I had my last of four hip operations. I have MRSA, I am supposed to be in isolation but they left me waiting in a bed with other patients on the corridors.

“Last December, I was given a bed for two days inside in the women’s public ward - I enjoyed it! But the point is whatever I had, I left in the public ward,” said Mike, whose spirit is exceptionally high considering what he has been through.

Every winter Mike visits India to give out jerseys to street children.

“They tested me for Lyme and Legionnaires’ disease because I have been going to India so often. I said to him, ‘I am more likely to get a disease here than I am in India’.

“I had implants for my teeth done in a hospital in India and it was like the old hospital wards here long ago. You could smell the bleach and the cleaning when you would walk in. I got no MRSA in India when I got my implants done

“I would have been ten times better off getting my hip operation in India. It would cost one tenth of the price, maybe even one 20th and I would have no infections,” he said.

Mike is resigned to the fact that he will have to use crutches; has MRSA and will have to take painkillers and antibiotics for the rest of his life. He has light sensitive skin from the antibiotics and can’t go out in the sun without a hat and gloves or his skin will blister.

“I have accepted my fate, I am not going to get better,” said Mike, who is still trying to live his life to the full. But it’s not easy.

“What really kills me is I was a person who did everything myself. I never asked anybody to do anything - electrical engineering, plumbing, flooring, carpentry I did it. My wife Joan caught me the other day trying to go up a ladder with the crutches at the side!

“But it is devastating when you think about it. I used to love fishing off the rocks in Clare and off the beach in Kerry. I can’t do a thing like that.

“The enjoyment that I should be looking forward to is gone. I would love to play a bit of golf. If I go abroad I can’t visit my friend in Spain because his apartment is on the second storey. We have a mobile home in Castlegregory and the drive down kills me. I should not be in this position. I was put in this position by not getting proper care, I am aggrieved by that.”

As somebody who has spent a large part of the last year and a half in UHL Mike says the health system is completely underfunded. “Absolutely, without a doubt. The nurses do their best.

“I was an ordinary working man who paid my taxes all my life. It is crazy that I have subsidised hospitals through my taxes and still have to pay for private health care to get anything done and even at that a botched job was made of it. I have had two years of hell.”

He asks why is there a cap on money spent in a hospital.

“There should be no ceiling on the money used to run a hospital. I’m not saying they should be overpaid but you just can’t turn around and cut so much. In the old days you didn’t get infections. Nobody is putting a cap on what we pay the politicians when you look at the pensions they are getting,” said Mike.

The lead story in last week’s Leader was “Crisis looms as hospital is €17 million over budget”.

Is Mike Condon one of the human costs?