Limerick lady Anne is regional Carer of the Year 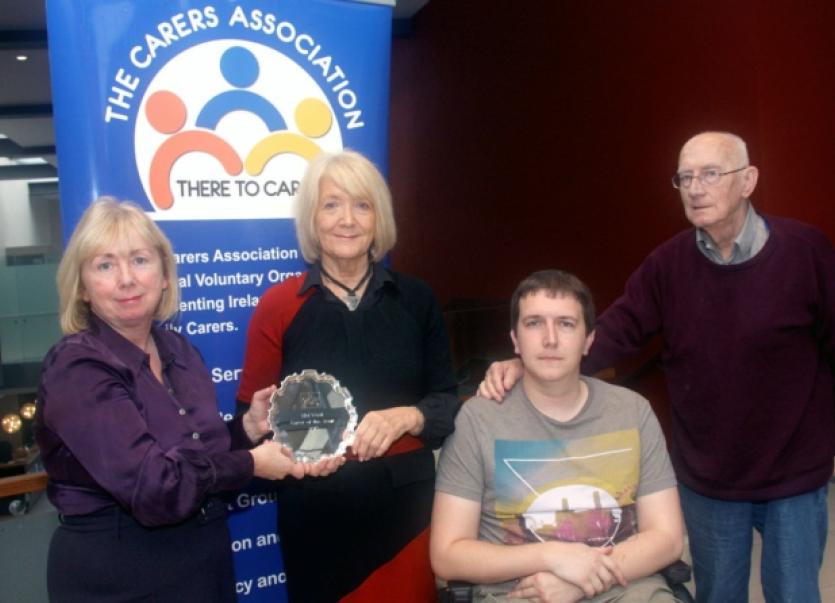 BALLINACURRA Gardens lady Anne Curtin has won the Mid-West Carer of the Year title at a ceremony organised by the Carers Association.

BALLINACURRA Gardens lady Anne Curtin has won the Mid-West Carer of the Year title at a ceremony organised by the Carers Association.

Anne was recognised by the charity for the care she gives to her son Andrew, 30, and her husband, local writer Michael Curtin.

Michael had a stroke eight years ago, and requires regular attention, while Andrew also needs a similar level of care following an accident which left him wheelchair-bound two years ago.

It was Andrew who nominated his mother for the title - and she beat 23 other carers to the title of Mid-West Carer of the Year.

Now, she will face 11 other carers from across the country in a Grand Final at Dublin’s Westin Hotel next week, hosted by Marty Whelan and Mary Kennedy.

“I am still in a state of shock. I am delighted, very honoured, and I owe it all to Andrew who did it behind my back,” Anne said, “Becoming a carer has been a learning curve. I never thought I would have to do it. But like hundreds of other carers in the country, you just get on with it, and give it your best shot”.

Asked why he nominated his Mum, Andrew said that since his accident: “My Mam has had to take on a lot of extra responsibilities. It has been accompanied by a lot of stress. It took its toll on my family in a big way. I often think to myself sometimes that [the accident] was harder for them than it was for me to deal with.”

He added: “She has put up with a lot of temper tantrums from me and my Dad, but she is still supporting us. That is commendable, I think.”

Anne said she has to “find an energy rush” when it comes to caring.

“Like hundreds of other carers in the country, you just get on with it, and give it your best shot. It is not always easy, but to be honoured with this is just wonderful, and I cannot thank the Carers Association enough,” she said.

Andrew said over the next period of time, he would like to get into working in songwriting and journalism.

But the first goal is to increase his independence.