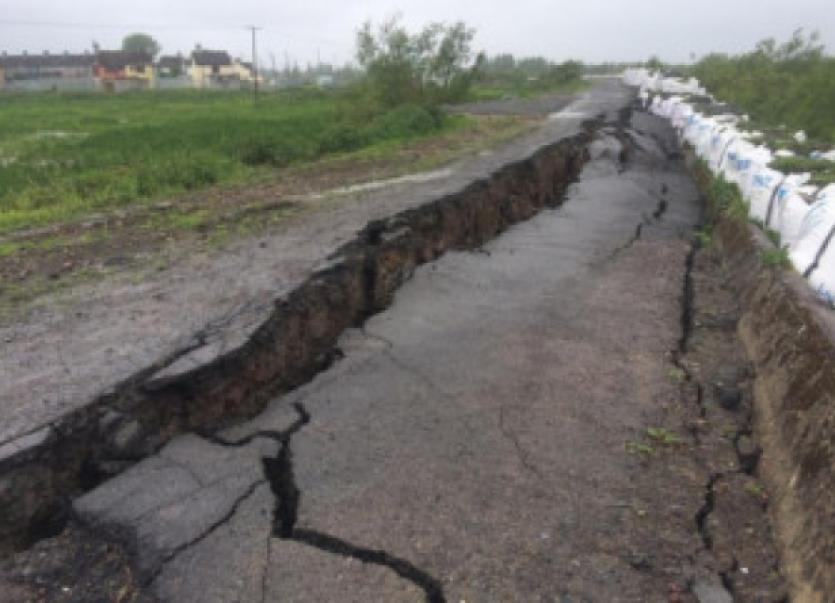 RESIDENTS and councillors in Limerick fear a repeat of the flooding horror which engulfed the city after a section of the Island Bank split, putting defences in danger.

RESIDENTS and councillors in Limerick fear a repeat of the flooding horror which engulfed the city after a section of the Island Bank split, putting defences in danger.

And there has been severe criticism of vandals who slashed sandbags designed to keep high tides at bay in the area.

Cllr Maurice Quinlivan, who took a picture of the land splitting on the Island Bank, said residents are now fearful of summer flooding.

In the wake of February’s stormy weather conditions, City Council set up flood defences to prevent an immediate recurrence of the flooding that ensured then, with more permanent supports intended to be built with funding from the Office of Public Works (OPW).

However, residents are still waiting for a funding announcement from the state body.

A contractor has been engaged to carry out immediate stabilisation works, and in a letter to residents, City Council’s office of Regeneration has emphatically stated: “We wish to confirm the Island is not at risk of flooding.”

However, Sinn Fein’s local councillor Quinlivan says residents are concerned at the “worst-case scenario” of a summer flood.

“The worst case scenario is we have a summer flood,” he said.

“There is no risk at the moment, but in the summer, there could be more high tides. I have spoken to a number of fishermen and boatmen who would be on the river all their lives and they are worried about this,” Cllr Quinlivan.

“These are the same people who will be the first up with their hand out if there is any case to be made,” Cllr Gilligan said.

It is understood between 80 and 100 bags distributed in February have been slashed.

City Council confirmed in a letter to residents that it has engaged the contractor to carry out the works, expected to last for around two weeks, between 7.30am and 9pm each day.

As a result, a large section of the Island Bank is now closed to pedestrians.

While Cllr Quinlivan welcomed the quick response of the local authority, he said Government needs to act to put residents at ease.

Local resident Seanie Quinlivan, who chairs the residents’ floods committee said: “What was put up there was not good enough. When it was done, it looks great, but suddenly it started to deteriorate.”

When St Mary’s Park opened in 1935, he said residents were given sleepers to build a breakwater. These lasted until the floods of 2009.

He suggested this could be a solution now, saying: “If what was done in 1935 can last 74 years, then surely we can look at something similar. Sleepers down there would work well.”