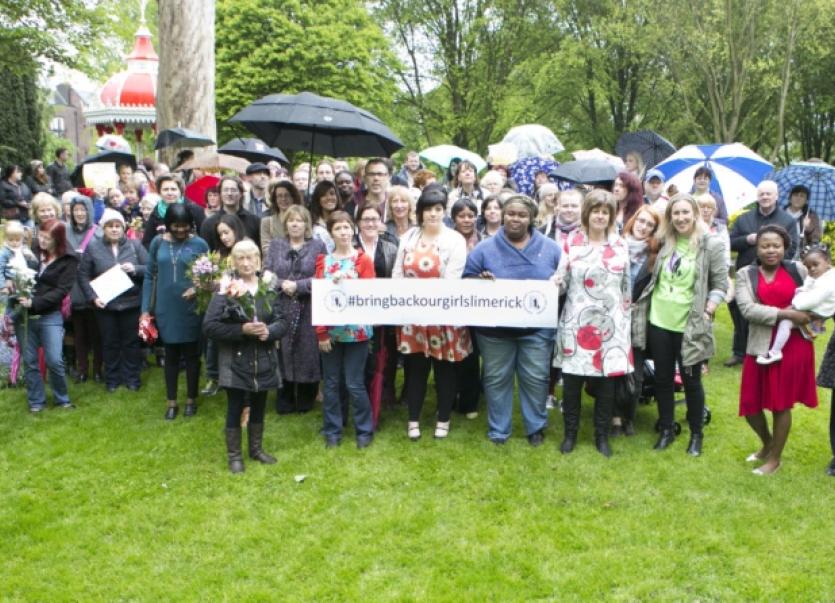 A MINUTE’S silence was observed in Limerick’s People’s Park this Wednesday, in the first rally of its kind in the country to show solidarity with over 200 girls who were kidnapped in Nigeria over a month ago.

A MINUTE’S silence was observed in Limerick’s People’s Park this Wednesday, in the first rally of its kind in the country to show solidarity with over 200 girls who were kidnapped in Nigeria over a month ago.

More than 200 girls were abducted from a boarding school in the Chibole province of northeast Nigeria by the militant Islamic group Boko Haram on April 14, which has sparked an outcry around the world.

The militants have released a video of about 130 girls, saying they could be swapped for jailed fighters.

The Islamic group opposes “western education” of Nigeria’s young people, in particular girls, and has threatened to sell the abducted girls as “brides”.

Many Nigerian residents in Limerick and support groups for women and involved in anti-trafficking campaigns expressed fears this week that the girls could be forced into prostitution.

Up to 100 people, largely women, attended the event the Bring Back Our Girls rally, organised by a group of organisations in the city, including Adapt Services, which supports victims of domestic abuse in Limerick, Doras Luimni, the support group for migrants, the Red Ribbon Project, and the Limerick Women’s Network.

Monica McElvaney, director of Adapt, said “we often are so caught up in the ups and downs of our own lives, we often forget about what’s happening in the rest of the world, and we thought it would be a good idea to take time out to remember the girls that have been abducted in Nigeria.

“It’s a shocking thing; girls should have a right to education and shouldn’t be used as weapons of war. We need to stand in solidarity with them. I suppose if it was our children that were abducted there would be millions out protesting, so we need to remember these are children and these are other women’s children and they want them back,” she said.

Nigerian national Geraldine Nwafar, who has been living in Limerick for two years, said it’s “quite painful” to see what is happening in her home country.

“They need to have their girls back. This event is very nice from Limerick people. I wish the people in Nigeria could see this. I always pray for Nigeria in distress. The international community needs to help Nigeria to help rescue the girls in this situation,” she said.

Venia Alxandrova, a volunteer work with Doras Luimni’s anti-trafficking movement, which patrols the streets of Limerick city to help women, said: “I think it’s absolutely heartbreaking that those girls are missing, away from their families, and are being denied an education and basic human rights.

“It’s absolutely devastating. We regard that as potential victims of trafficking and it’s a very big concern.”