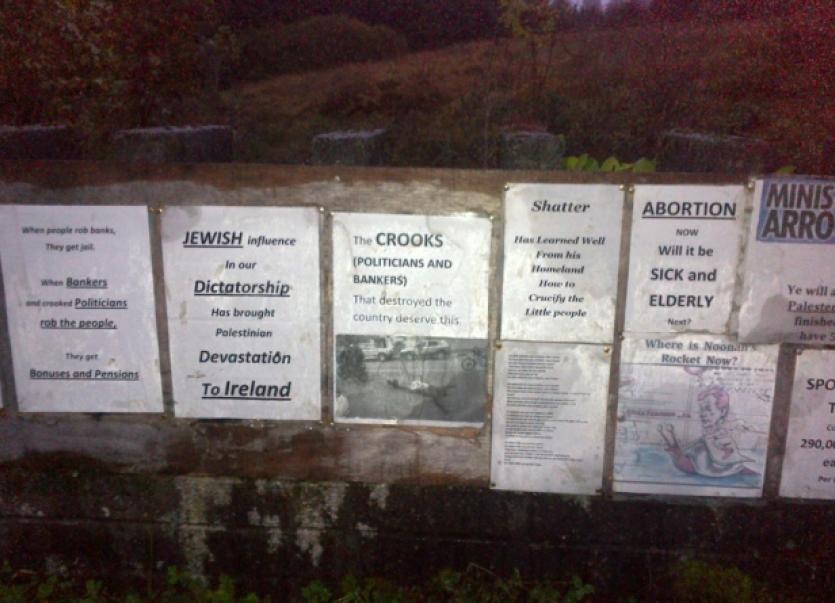 COUNCILLORS in West Limerick have reacted with outrage to a series of anti-Semitic and hate posters which were attached to a bridge in the Sugar Hill area. But following the intervention of local election canidate, Christy Kelly, the most offensive posters, targeting Minister Alan Shatter in particular, have now been removed.

COUNCILLORS in West Limerick have reacted with outrage to a series of anti-Semitic and hate posters which were attached to a bridge in the Sugar Hill area. But following the intervention of local election canidate, Christy Kelly, the most offensive posters, targeting Minister Alan Shatter in particular, have now been removed.

However, the incident has raised the heat, ahead of next year’s local elections, about poster policy in general.

The three offending posters, seen by the Limerick Leader, were among a large number of other handmade posters all strung along one wall of the the stone-cut Sugar Hill bridge, located a little over a mile from Barnagh.

The other posters, which remain in place, are strongly critical of “corrupt” politicians, political parties, the property tax, austerity budgets and bankers. A number of them are particularly critical of the Taoiseach and Fine Gael TDs Patrick O’Donovan and Dan Neville over the Protection of Life during Pregnancy Act with one referring to the Taoiseach as Herod Kenny.

And along with the posters, a black flag hung on a makeshift pole along with a cut-out map of Ireland, with Sold written across it.

But the posters which have given rise to concern have an anti-Semitic undertone. “Shatter has learned from his homeland how to crucify the little people,” says one.

“Jewish influence in our dictatorship has brought Palestinian devastation to Ireland,” proclaims another while a third, under a picture of Minister Alan Shatter says: “Ye will all be as poor as the Palestinians when are are finished and be glad to have €5 a day.”

“It is frightening to think people would even think of putting these up,” Cllr Jerome Scanlan said this Wednesday. “It is absolutely shocking that anybody would do so.”

His party colleague, Cllr Damien Riedy was equally appalled and described the three posters in question as “disturbing”. “If people know these posters are being put up, they have a duty of care to people if there is anyting on them that is anti-Semitic or inciting to hatred. They should be taken down and it should not be left until the matter is raised by the Limerick Leader,” he said.

Cllr Francis Foley said he was aware that the bridge at Sugar Hill was a display of posters but he was not aware of the detail of any posters and had not received any complaints.

Independent local election candidate Christy Kelly, of Citizens against Austerity, dissassociated himself from the three posters in question. However, he told the Limerick Leader on Tuesday night that he knew the person who had put them up and would ask him to remove them. “I am not putting up the stuff. It is there,” he said. “Of course it isn’t appropriate but I can’t account for what anybody else does.”

“I would disassociate myself from anything anti-Semitic,” he stressed but he acknowledged sympathy with some of the other views expressed in other posters. Through his canvassing, he said, he knew that people were angry about bills, unemployment, emigration and simply trying to cope.

By early on Wednesday morning, the three offending posters had been removed.

Meanwhile, Cllr Riedy has called for clarity on poster policy, especially anonymous material. “I am all for democracy but there is a diffence between democracy and anti-Semitism,” he said.

He is now also at odds with other Newcastle West councillors who agreed at a recent area meeting to ban all local election posters within the 60km speed limit of towns and villages in the area.

The move came as a gesture of support to Tidy Towns Committees, as the posters would be up during May and June, a crucial time for such committees. But Cllr Riedy believes it is a step too far. He wants posters to be allowed in designated areas but with strict limits on numbers.

He is unhappy with the situation and intends to bring the matter up again at the next meeting of area councillors.