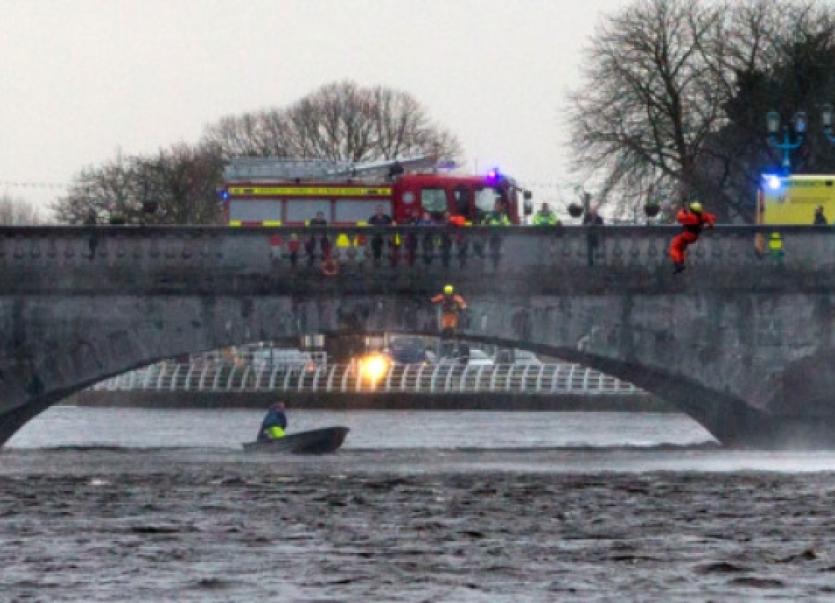 A CITY fireman who jumped from Sarsfield Bridge to rescue a woman on Saturday is being hailed as a hero.

A CITY fireman who jumped from Sarsfield Bridge to rescue a woman on Saturday is being hailed as a hero.

Sean Curtin’s photograph captures the dramatic moment that firefighter Eli Brace leaped into the River Shannon at around 5.30pm.

The Coast Guard helicopter also attended the scene and had attempted to lower one of its personnel by winch to reach the woman. When this proved unsuccessful, Mr Brace, 36, jumped from Sarsfield Bridge to rescue the woman.

It is understood that a member of the public had seen the woman enter the water at Thomond Bridge and emergency personnel were already on hand as she was being swept under Sarsfield Bridge minutes later.

Mr Brace, a father-of-two from Ennis, is one of around 50 members of Limerick City Fire Service who has received specialist training in river rescues. He had arrived at the scene with all the gear needed to enter the river and effect the rescue.

“Our fire-fighters and all staff of Limerick Fire & Rescue Service are amongst the most highly trained in the country,” commented Limerick fire chief Michael Ryan.

“As part of their regular training, they carry out exercises in swift water rescue techniques. Such training came to the fore at the weekend and we are delighted to have played our part in this rescue effort alongside the other emergency services. The firefighter in question was equipped and trained to enter the water as he did. He was wearing a water rescue dry suit, personal floatation device and a helmet also specifically designed for water rescue.”

The woman, who is understood to be from the Garryowen area, did not suffer serious injury and is recovering.