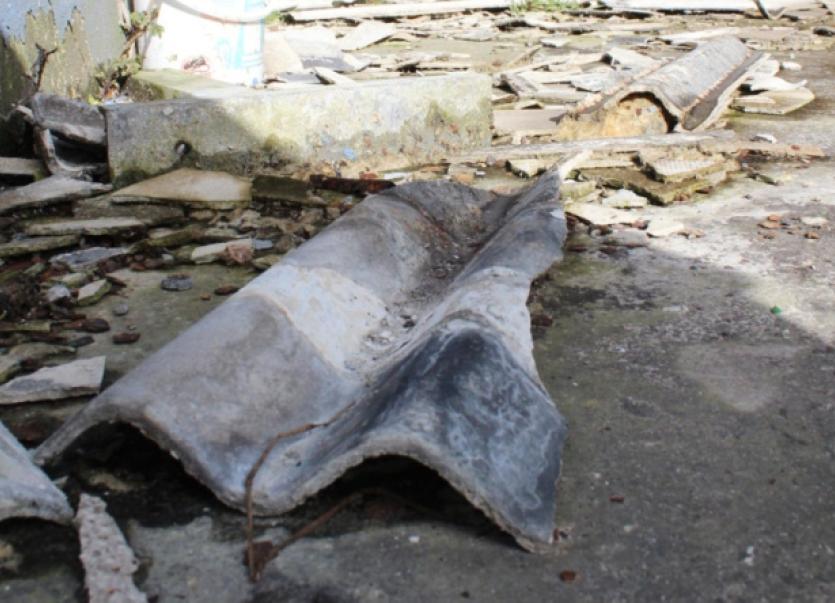 TESTS are to be carried out on fragments of the roof which fell off the old Castlemahon Foods factory during the recent bad weather.

TESTS are to be carried out on fragments of the roof which fell off the old Castlemahon Foods factory during the recent bad weather.

“We cannot be certain they are asbestos but there is a possibility that they are,” Cllr Jerome Scanlan told the Limerick Leader.

Cllr Scanlan alerted Limerick County Council to the issue this week and a senior official from the fire section visited the factory premises on  Tuesday.

“The fire section is responsible for dangerous buildings,” Cllr Scanlan pointed out. “We have a situation here where parts of the roof of some buildings have blown off. This in itself poses a risk, particularly as there is a new playing and recreation area just across the river and the school is just a hundred or so yards away,” the councillor said. The official will now report to the Chief Fire Officer and to the Director of Services for Environment.

Cllr Scanlan is also concerned however that there is asbestos in the damaged roofs and the fallen fragments which litter the yard and an open building. “Local knowledge would suggest it is,” he said. “But what needs to happen now is that it is analysed and that hasn’t happened yet. I have impressed on different council officials that this needs to be done urgently and I believe the analysis and the report for the Chief Fire Officer will be done within days.”

The building, he insisted, needs to be made safe. Up to this Tuesday, the gate to the premises, which is for sale, was wide open, and there was some evidence, Cllr Scanlan, that children were playing in the yard there.

Fortunately, he added, this situation had now changed and the gate would remain closed at all times and access would be restricted ..

The building was bought by a Tipperary-based company after Castlemahon Foods ceased production but it is now up for sale again. Two commercial enterprises operate in units within the premises.