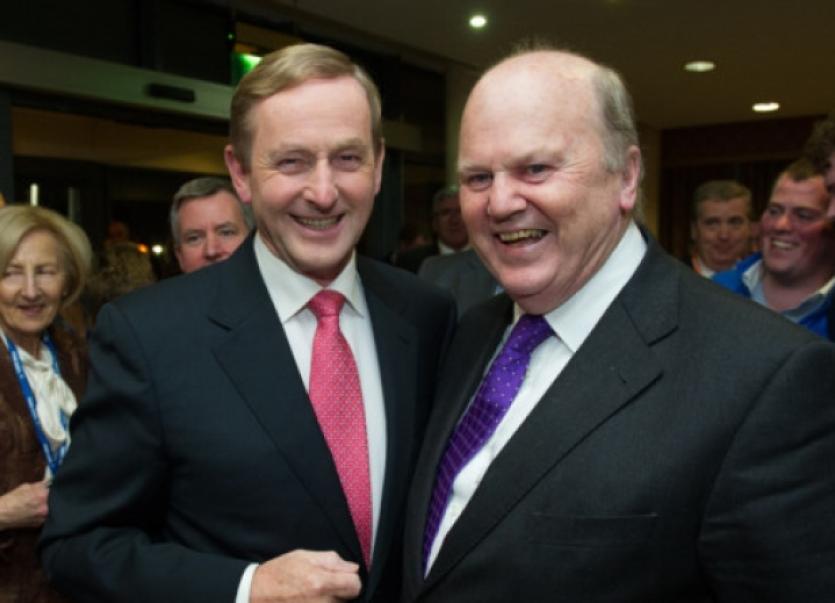 A DAY after delivering his third budget speech, Minister for Finance Michael Noonan said he was happy to remain in the job as long Enda Kenny wanted him there – and added he planned to contest the next general election in Limerick.

A DAY after delivering his third budget speech, Minister for Finance Michael Noonan said he was happy to remain in the job as long Enda Kenny wanted him there – and added he planned to contest the next general election in Limerick.

In a week when local political rivals rounded on Budget 2014 as “a brutal betrayal” of the elderly, the 70-year-old minister showed little sign of having lost the appetite for the cut and thrust of politics.

Four days before his budget speech, at the Fine Gael conference in the South Court hotel, Mr Noonan strongly indicated that he had little intention of retiring. “My plan is to stand again, and we will see what the fortunes of politics are then,” he told the Leader.

This Wednesday, Mr Noonan was a little more circumspect but still minded to put himself before the people again. “It’s a bit early to make an announcement because we are only at the halfway stage in this government but my intention is to carry on as long as the Taoiseach wants me to carry on as Minister for Finance and shortly before the election I will make a public announcement as to whether I am standing again or not. But at the moment it is my intention to stand again,” he said.

After Fianna Fail’s Deputy Willie O’Dea said that this week’s cut in the bereavement grant to cover funeral costs was evidence the coalition was now pursuing the elderly into the grave, Minister Noonan said his rival would do better to look at his own record in government.

“For a man who spent so many years in government and did very little for Limerick city or county, I would expect him to be on the attack. He should explain his own lack of activity for the city and county when he was a minister,” said Minister Noonan.

He had not been surprised at the ferocity of the criticism surrounding the cut in jobseekers’ allowance for the under-25s or measures affecting the elderly such as changes in eligibility criteria for over-70s medical cards and the abolition of the telephone allowance. “These were areas which you could predict would be controversial but I am surprised at the very strong positive response to all the job creation proposals that are in the budget and the big welcome from the Limerick region and the Limerick city area for the €6 million we have put in for the City of Culture 2014.

“And then there’s the Ryanair announcement this [Wednesday] evening that it is creating 1,000 extra jobs and bringing in an extra million passengers into the country after the reduction to zero of the travel tax. There will be good news for Shannon in that as well but it will be up to them [Ryanair] to spell out the details for Shannon Airport,” the minister said.

“On the elderly, we didn’t touch pensions. We didn’t take anything away from either contributory or non-contributory pensions and by international standards they are quite good. Compared to what pensioners get in the north of Ireland, they are well ahead of that. On the tax side, I didn’t touch the tax credits or reduce them in any way even though they are quite good as well. An elderly couple on a pension would have an income of over €36,000 before they have to pay any income tax.”

But Fianna Fail TDs in Limerick have been stinging in their criticism of Minister Noonan’s budget.

Deputy Niall Collins commented: “The government has singled out pensioners for significant cuts next year. The dramatic cut in the medical card eligibility means that thousands of older people in Limerick could lose their full medical cards. This, on top of the hike in prescription charges, the abolition of the telephone allowance, the increase in DIRT tax savings and the scrapping of the bereavement grant amounts to a disgraceful attack on older people.

“Pensioners in Limerick who have worked for decades, paid their taxes and made a huge contribution to society and the economy, are now being left out in the cold by this government. Their medical supports, their household benefits package, the small support they get when they are widowed, and even their savings are now been targeted,” Deputy Collins said.

“Taking away medical cards from thousands of older people in Limerick will jeopardise the health of those most vulnerable to illness. Removing the telephone allowance adds to the security risks of many older people who already feel isolated and vulnerable in their homes.

“This budget is a brutal betrayal of the older generation. I am calling on the Government to seriously reconsider its approach before it’s too late,” said Deputy Collins.

Deputy O’Dea has also attacked budget cuts to Ireland’s oldest citizens and added that in scrapping the bereavement grant of €850 “the Government is now chasing the elderly with cuts all the way to the grave: this final cut is the deepest for bereaved families.

“Funeral costs in Ireland have risen over the past number of years with the average price in the country of around €3,000 to €5,000. The bereavement grant is paid to people who have made PRSI contributions over their working life and is vital to help ease the burden of a close family member passing on. This modest grant gave many families peace of mind and was a welcome respite at a time of grief and stress. By abolishing it, the government again demonstrates its ability to measure the cost of everything and the value of nothing.”

Nor could the young take any comfort from Budget 2014, according to Deputy O’Dea, particularly those thousands of under-25s who find themselves out of work and will see reduced dole payments from January.

“This Government seems to have given up on young people. They are slashing their income support making it extremely difficult for our young people to live in this country. They have also failed miserably to implement labour activation measures that work. The obvious discrimination is galling and shows how little faith Fine Gael and Labour have in the next generation,” said Deputy O’Dea.

Minister of State Jan O’Sullivan said that rather than giving up on the young, Budget 2014 had “a strong focus on children”.

“One significant reform in Budget 2014 is the welcome commitment to extend free GP care to children of five years and younger. This is an issue I worked closely on in recent years with Labour Party colleagues and I am particularly pleased to see it now become a reality. It is a measure that treats all children equally and will make a real difference to thousands of working families.

“Five million euro will be invested in delivering a school-book rental scheme in every primary school. This will reduce the back-to-school costs for families. Also in education, we’ve protected the pupil-teacher ratio and more than 1,000 new teachers will be recruited next year,” she said.

“As Housing Minister I was also pleased to confirm my commitment to provide €30 million per year to Limerick Regeneration between now and 2016. I also look forward to seeing the €25 million that will be invested in the local authority energy efficiency scheme nationwide in 2014 creating warmer homes for local authority tenants in Limerick.

Specific measures that will help Limerick and the region would “maintain the momentum” that had seen the mid-west record the most significant drop in unemployment in the country this year, she said.

“Limerick has benefitted from this budget. €6 million will be invested to support Limerick City of Culture in 2014. This important commitment puts Limerick on track to be the prime tourist destination in 2014 and is very welcome. I am also pleased to see the retention of the lower VAT rate for the tourism sector and the reduction of the air travel tax to zero has the capacity to boost business at Shannon Airport.”

See page 6 for further reaction to this week’s budget.