Historic tourist spot in Limerick is targeted by vandals 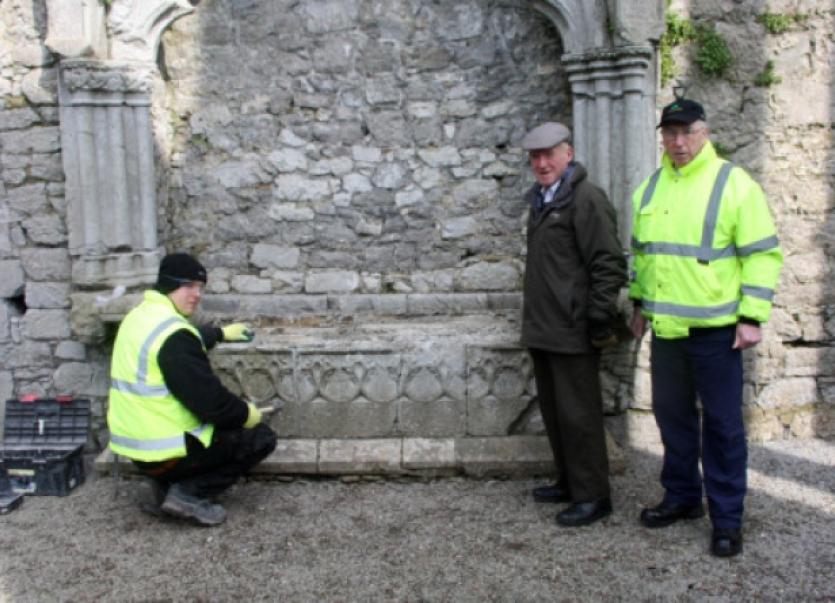 HUNDREDS of euro worth of damage has been caused to an ancient tomb in one of County Limerick’s most popular tourist sites, in what a local historian has described as a “ determined effort at wrecking and destruction”.

HUNDREDS of euro worth of damage has been caused to an ancient tomb in one of County Limerick’s most popular tourist sites, in what a local historian has described as a “ determined effort at wrecking and destruction”.

Parts of a slab covering a tomb at the Dominican Priory in Kilmallock were broken off in what is understood to be a wanton act of vandalism.

According to local historian, Noel Collins, the site in question is quite possibly the tomb of the first “White Knight” of the Fitzgibbon clan.

“The original tomb was damaged and destroyed by the Cromwellian Armies in 1648 and there were fragments of it thrown around inside the abbey. It was reconstructed in 1983 when the abbey became open to the public,” explained Mr Collins, secretary of the Kilmallock Historical Society. The tomb itself, he feels, dates from the 1300s.

“The Fitzgibbon’s had the title of White Knight. They got the title in 1333. They were mostly associated with this region of County Limerick and they were important patrons of the abbey. It was definitely some VIP but probably the first white knight,” continued Mr Collins.

Aighleann O’Shaughnessy, conservation architect with the Office of Public Works - who are working on repairing the damage - said it is always “very sad” to see vandalism of any kind.

“We are lucky that they didn’t actually damage the medieval part of the tomb,” she said.

Concern has been mounting locally about security at the ancient site, which has suffered other smaller incidents of vandalism in recent times.

“Groups of youths go in there on a regular basis and there are cans and bottles thrown inside on a regular basis. This is particularly interesting in that it must have taken a lot of effort and force to break through the slabs,” said Mr Collins.

“Whether they were trying to break into the tomb I don’t know. They must have got big stones. They saw there is nothing there only concrete stones and filler. It was a determined effort at wrecking and destruction. It is a worrying development really.”

Mr Collins said that if the vandalism continued, CCTV would have to be installed in the priory “or else just cut off sections of the priory.”

“It would be terrible to see it happen. It would spoil the appearance and the experience for people coming into the town.”

The historian is appealing to members of the public to “keep an eye on the site” and report any incidences of vandalism or unruly behaviour.

“It’s there 700 years and it’s a great attraction for the town. It would be sad if this generation finished off the destruction of the priory. It is highly regarded and is the main attraction in Kilmallock for visitors and features on all the tourist brochures and literature. It would be a shame if it had to be cut off again. This is only the remnants of what was a magnificent priory so it is a tragic to see it treated like that.”

Gardai in Kilmallock have been notified of the incident.