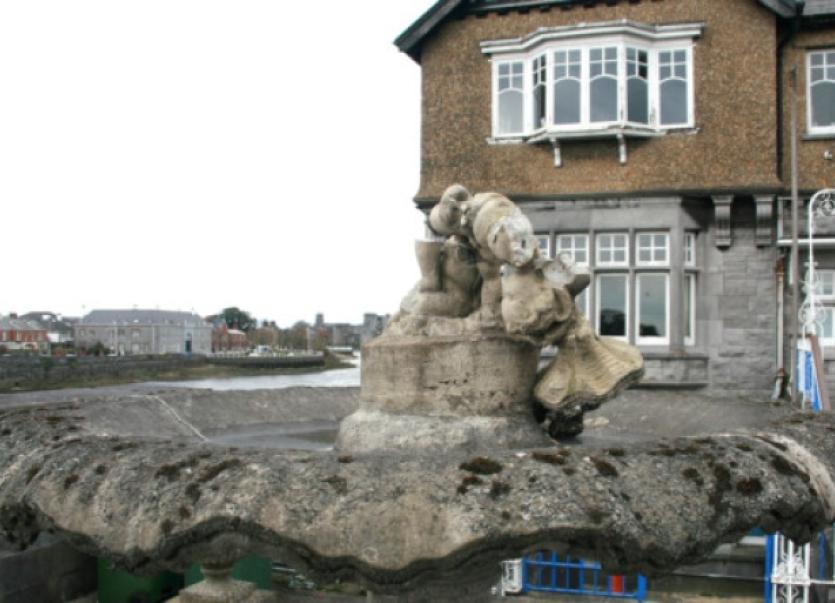 VANDALS who smashed an iconic fountain on Sarsfield Bridge have left Shannon Rowing Club with a major headache.

VANDALS who smashed an iconic fountain on Sarsfield Bridge have left Shannon Rowing Club with a major headache.

The ornate statue in the centre of the fountain outside club’s building is estimated to date from 1906, yet was cruelly vandalised just a week ago.

The club have reported the incident to gardai but are not confident of discovering the culprit of the heartless crime. The restoration of the fountain is something the club just cannot afford, secretary Paul Flannery explained this week.

“We have reported it to the guards but unfortunately there are no witnesses and there is very little they will be able to do,” said Mr Flannery of the incident, which happened in the early hours of last Friday morning.

“It is disappointing because we are trying to get the club back on its feet and every penny counts in the current climate, and we don’t need this. It is a listed building so we are trying to raise money to replace the windows, which is an expensive process, so this is an unnecessary headache. It is a nightmare.

“It is stone and concrete and someone went pulling and dragging at it. They made a conscious effort to do damage to it,” he added.

The fountain was only just recently repaired by club members, he said.

“That fountain has been there since literally the day the club was built and we don’t know how much it is going to cost to restore it,” said Paul.

“A couple of our members spent a lot of time last summer actually getting it back into working order with the pump and filling holes. It was back working and last year for the Munster match we had red water in it and the same for Paddy’s Day - they put a lot of time and effort at their own personal cost to get it back working.”

The club, which has been built up to 180 members thanks to a recent drive - including 80 young members, both boys and girls - have no idea how they will afford repairs for the fountain, or even how much restoration would cost.

“It is an iconic figure and given the volume of people walking and driving over the bridge on a daily basis, it is disappointing,” said Paul.

“A lot of people grew up passing it on a daily basis and to see it in its current condition is sad. We would like to get it back up and going again but how long it is going to take, I don’t know. I wouldn’t hazard a guess at the cost.”