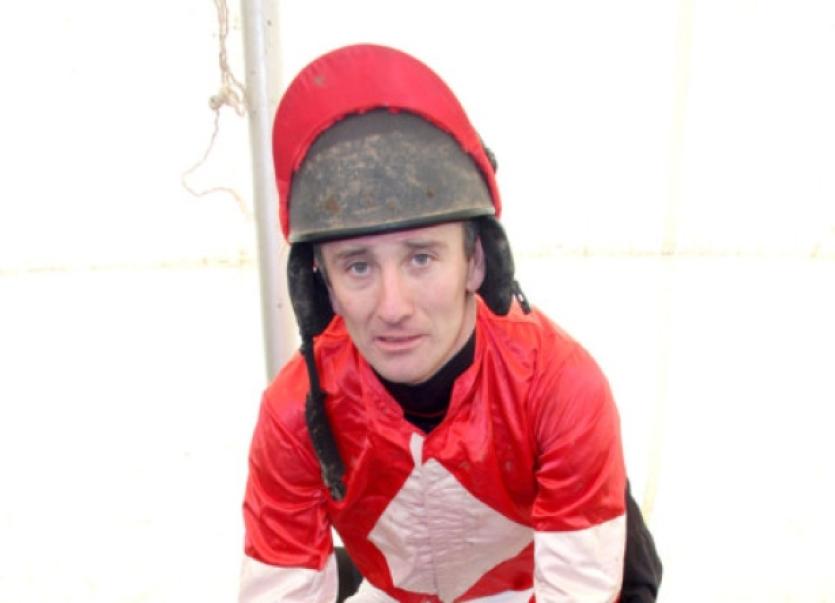 ONE of JT McNamara’s closest friends says that if anyone can overcome the serious injuries suffered by the Limerick jockey it is the Croom man.

ONE of JT McNamara’s closest friends says that if anyone can overcome the serious injuries suffered by the Limerick jockey it is the Croom man.

Mikey Joe Cregan, from Athlacca, who visited the injured jockey in Bristol last Friday, is confident that the father-of-three’s determination will see him “beat this”.

“I found him in good spirits. He is in no way down or anything like that,” said Mikey Joe who travelled with the champion jockey to this year’s Cheltenham Festival.

“He is as bright as a button and his mind is perfect. I have no doubt that this man will come out of this,” he added.

The 37-year-old suffered his injury in a fall from Galaxy Rock on March 14, towards the end of the Festival’s third day.

While he suffered a serious neck injury resulting in paralysis, according to those close to the jockey, it is far too early to be drawing any conclusions about the long term implications of his injury.

“It may take a bit of time but I was very happy with what I saw the other day,” continued Mikey Joe.

“The care he getting over there is absolutely marvellous.” JT, who had planned to retire from the sport this summer, made the journey to the Cheltenham Festival with Mikey Joe on March 11. The pair were reunited for the first time since the tragic fall, in Frenchay Hospital on Friday.

“We spent most of the day going in and out to him, myself and a friend of his from Tipperary, Danny O’Connell. He rode a good bit for Danny, and we found him great. His face lit up when he saw us. Danny and him would be friends for years and years,” Mikey Joe explained.

JT, Mikey Joe said, still has his same old spark “and can still see the funny side of things”.

“He had a smile for us that day. He is a great fella. There is no way this is going to beat this man. I have no doubt that this man will walk again,” said Mikey Joe.

JT, a well-known and respected amateur rider is understood to be keeping up-to-date with the race meetings being held in Ireland and the UK, both on the television and radio. He is also enjoying the company of his close family, and friends from the horse racing world. His uncle Andrew, a Cheltenham festival winning trainer, visited his nephew on Saturday, and again, found him in good spirits.

Caroline, JT’s wife is a constant presence at his side.

“He is awfully lucky with the wife he has,” said Mikey Joe.

“I couldn’t describe in words how good this woman is. She is an unbelievable person.”

Caroline’s positive attitude, Mickey Joe said, is a source of immense stength to all.

“She is such an upbeat person – she is great for JT at the moment. She is more upbeat than anyone and that’s what he needs,” he added.

The McNamara family are also being assisted by the Injured Jockeys Fund which provides support to all newly injured jockeys in whatever way is appropriate to ensure a reasonable quality of life for them and their families.

“They are great,” said Mikey Joe. “There is a girl there and she is absolutely fabulous. She was there most of the day we were there. Jonjo O’Neill and Jacqui have been fantastic as well.”

A fund for JT received a major boost on Monday when Michael O’Leary, the chief executive of Ryanair and a major owner of jumps racehorses, donated €200,000.

He had intended to offer the sum to the owner of whichever horse won the race before the Irish National, a contest which usually features a number of young and promising animals.

O’Leary has made a habit of offering to buy the winner of that race in recent years but, in the event, managed to win it with a horse he already owned and decided to put his money to an extremely popular alternative use.

Speaking at the race meeting on Easter Monday, Noreen McManus, wife of the Limerick horse owner JP, said JT was very much in her thoughts.

“We wish our great jockey JT the very best of luck.

“We are thinking about him more than anybody else at this moment.

“He is an amazing guy and we are so fond of him and good luck to Caroline, the kids and all the family,” she said.